This is a Summer anime whose broadcast was postponed after the 4th episode till Fall to improve the quality of the show. The question is whether the final product is worth watching or not? That is what we will find out as we take a look at Regalia: The Three Sacred Stars. 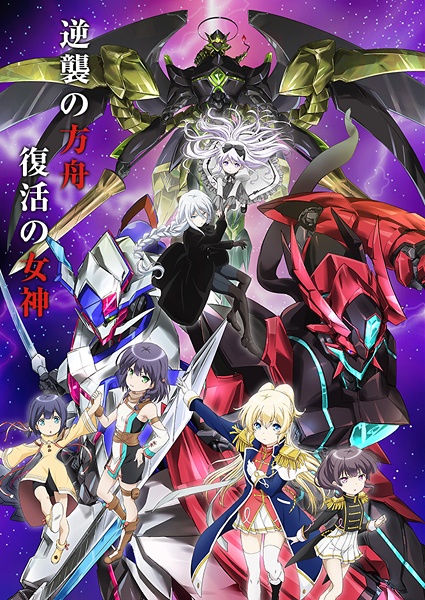 Plot Summary: 12 years ago, in the country of Rimguard, a big incident left an unsolved mystery that has begun to fade from people’s memories. Time passes, and sisters Yui and Rena are living peacefully in the Enastria Empire. However, one day, a large mecha attacks Enastria. This day marks the turning point when the two girls get caught in the vortex of fate.

The best way I can describe my experience watching this show is the same way internet reviewers describe basic basic platformers, really good to great gameplay, mediocre to passable story. Basically Regalia has some pretty good mecha battles, with some creative ones, while the overall plot is average. The robots, called Regalia here (basically lolis, and some other people, who can turn into giant robots and make “life contracts” with their partners.), all look cool, my favorite being the primary Magna Alecto and its creepy dark-shadowy motif, giving it anti-heroine vibes. The robot battles as mentioned were all enjoyable. I do not consider myself much of a mecha series fan as the ones I have seen in their entirety are far and few for mecha fan standards so I cannot say how they rank among mecha enthusiasts. Still, I would say they are pretty cool. Some of them are also creative like the battle against the magician Regalia Gear, aka not-loli mechas. The show’s animation quality was decent before getting postponed and it did get better after it came back. It is not very noticeable at first but the improvements are there. The soundtrack is also solid with a decent OP and ED.

Regarding the story, as I stated above it is average. The main theme of “the human will can overcome many adversities when people band together” is there and the good characters are all likable but again the main plot sounded really interesting at first but ultimately was passable at best. I will say that the Regalia lore and history are interesting and could make a pretty cool spinoff show, one set in a world where half of the civilization are people who can transform into mechs. The character development and interactions are solid, especially between Yui X Rena and Ingrid X Kei. The main villain though…I get what they were going for with the baddie but his motivation and the extremes he went to to get what he wanted did not exactly mesh well for me. Because of the show’s main theme he barely made the cut as a passable villain. But really if he were replaced by a stereotypical power hungry dictator it would not have made much of a difference. Oh well, he did an okay job being a despicable douchebag viewers would want to see get his arse kicked by our adorable heroines. Like the other mecha battles on the show the final boss fight with him was cool.

The yuri starts off strong and some of it carries over to the 2nd half but it does not exactly kick into high gear. It is more like ship worthy sisterly love. The material is clearly there but do not expect the interactions to become super romantic like others have done in 2016 when this show aired. There is Retsu and her love for cute girls and women but again nothing spectacular.

Overall Regalia: The Three Sacred Stars was a decent mecha anime that has pretty good giant robot action but its story is passable at best. The mechas are cool, the animation and soundtrack are solid, the leading ladies are cute and likable and shipping potential is there but do not expect anything super romantic on screen, more along the lines of “d’awwww” moments. I would recommend the interested checking it out at least once or twice.

Yuri and Slice of Life are my anime passion.
View all posts by OG-Man →
This entry was posted in G-Views and tagged action, drama, mecha, Regalia The Three Sacred Stars, sci-fi, science fiction. Bookmark the permalink.