Last time left us with quite the cliffhanger. Now we get the answers.

Ren elaborated on her current situation. Mama Hazuki attended the Jinguu Music Academy before it closed down so she planned on founding a new one, Yu(r)igaoka. However, Papa Hazuki (or whatever his surname was as I assume they divorced) disagreed because he had to work overseas and wanted the ladies to come with. They of course didn’t. I think I recall Ren saying her mom had poor health last time. Point being she was so focused on ensuring Yu(r)igaoka’s success she overworked herself to death. Based on the rest of Ren’s explanation she used most of the money left on her mother’s side to support the school, hence why it’s almost up. Last time it’s supposedly mentioned the school depended on Ren’s money but no. They just needed more applicants the following year.

The next day the General Course students presented their petition opposing Ren’s decision. The gang wanted to help Ren but she made them promise not to tell the school about its status to avoid causing mass hysteria (I’m exaggerating but you get the idea). They then tried reasoning with both General and Music students while being discreet about the finer details but neither side would budge. Keke even got fired up when they brought up Ren’s decision affecting school idols too.

Afterward Ren approached the gang since the Headmistress was like “This is getting out of hand. Either come to a compromise with everyone or the festival is cancelled”. Kanon again asked her to reverse the decision but the school idol thing was what’s stopping her. Finally with no other option she explained. Mama Hazuki was a school idol before they became commonplace. Whether that means she’s the very first one before μ’s or the first one in that part of Japan I’m not sure. As is series tradition she did it to save Jinguu Music Academy. Unfortunately she failed. To continue her legacy Ren wanted to become a school idol to support Yu(r)igaoka. However, when she searched for Mama Hazuki’s school idol photos, tools and all related stuff at her place it was all gone. Ren assumed Mama Hazuki was so distraught by her failure she removed everything school idol related from her life. Thus Ren didn’t want to see other girls aspiring to become school idols at Yu(r)igaoka have their dreams broken like Mama Hazuki.

Basically it looked like her disapproval was based on a misunderstanding.

Kanon found it hard to believe Mama Hazuki would regret becoming a school idol so she tried looking looking up club records on school idols at Yu(r)igaoka but there was nothing. Before it was time for the school assembly Kanon asked Ren if there’s anything Mama Hazuki said to her. There’s something long ago she couldn’t remember but there’s something else she often said about the school: “I hope that very place continues to bring people together”. Kanon puzzled a bit till she remembered the School Idol Club room. There were two keys. One was for the front door but what about the other? 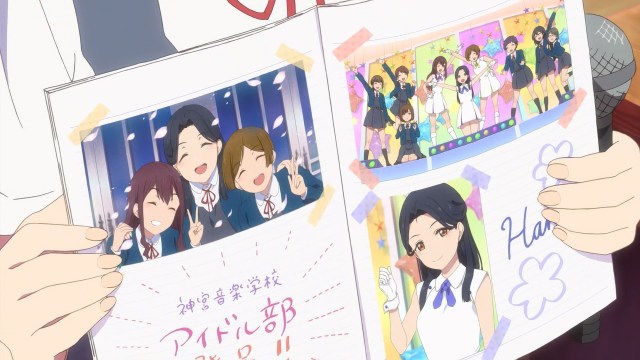 It was to a secret box containing Mama (Hana) Hazuki’s school idol portfolio. Before Ren could announce the festival cancellation Kanon was given the mic. Long story short Mama Hazuki was sad she and her team couldn’t save Jinguu but her time as school idol was some of the best in her life. Ren remembered that’s what she told her when she’s a child and a huge weight was lifted off her shoulders.

I’m sure many readers wondered as they watched the episode why didn’t the Headmistress tell them about Mama Hazuki. I was expecting the classic “You never asked” but it’s actually “Don’t blame me. She told me to keep it secret so you could make your own destiny Ren”. With the truth finally revealed Headmistress dropped the “courteous adult” act and was her true self. Bet she’d be quite the chick magnet. She’s also Mama Hazuki’s biggest fan if her subtle tone and closeness in the photos were indications.

Last but not least Kanon invited Ren to join the team. She’s like “After all I’ve done I don’t think I’m worthy” to which Kanon replied “Dood. It’s in your blood. We’d love to have you”. A certain school idol goddess (not Nozomi or Dia) guided Ren to her destiny. With that settled there’s one thing left to do.

Wonderful. With no idea if their combined power would be enough to attract more new students our heroines agreed to just keep going for now.

Great stuff. Next time the origin of Liella.

Yuri and Slice of Life are my anime passion.
View all posts by OG-Man →
This entry was posted in Episodic Anime posts and tagged Episode 8, Love Live! Superstar!!. Bookmark the permalink.