The following anime looked pretty but a part of me was kind of wary of the “elephant in the room” that is on the upper right corner of the below image. Was the show enjoyable despite his presence? Let us find out as we take a look at Sansha Sanyou, aka Three Leaves, Three Colors in the West.

Plot Summary: Futaba Odagiri is incredibly energetic but is also a glutton. Teru Hayama looks like an angel but she is really a demonic class president. Yōko Nishikawa is the daughter of family that used to be a member of the upper class, but after her father’s company went bankrupt, they became poor. All three high school girls have the kanji for “leaf” in their name but could not be any different from one another.

The show is similar to Wakaba Girl in that at its core it is a very basic Girls Club show. Yes, despite there being some boys that show up once in a while, especially the guy in the above picture, the show still counts as a GC as it is mainly about cute girls doing things. Other than that there is not much else to say about what happens as most of it is standard GC or even school comedy fare, such as holiday themed ones, school activities, swimsuit episode, going to fun places together etc. What makes Sansha Sanyou somewhat stand out from the GC crowd is the quirkiness of its cast. Almost none of the characters are particularly unique but they go all-out with their quirky traits.

The above gif is an example of another thing that makes Sansha Sanyou stand out from other GC shows, its gorgeous animation. The character motions are so fluent and mesmerizing that one cannot help but applaud the effort that went into bringing these characters to life from the manga. Even I who am not a professional animation quality critic commend SS’ effort. Next to Anne Happy! this is one of the most colorful anime of the Spring 2016 season. It is THAT good. The music is okay.

Since there is little else to talk about let us briefly go over the main along with my favorite side-characters.

Yoko, or Lady Yoko as I address her, is a “riches to rags” ojou-sama who maintains proper etiquette even though she is currently poor. Even when upset her berating comes off as polite scolding. Her development is all about appreciating the simpler things in life that she could not when she was rich. Her smile also melted my heart every time.

Next up is Futaba. She is a classic “girl who eats a lot yet still has a good figure no matter what” bottomless pit character. Her quirk is that she is more than a gobbler and how proud she is of being a gobbler. 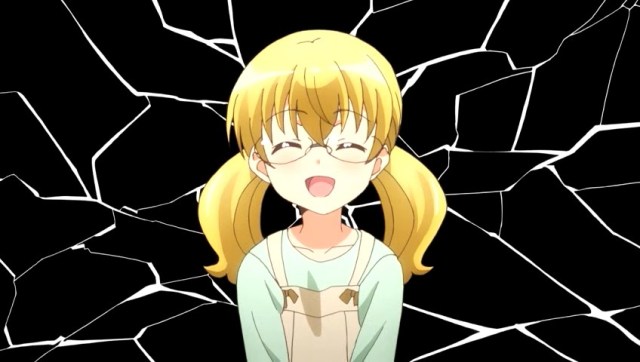 The last member of the main trio is Teru Hayama, an animal lover who also happens to be a half-demon even though she looks nice on the outside. 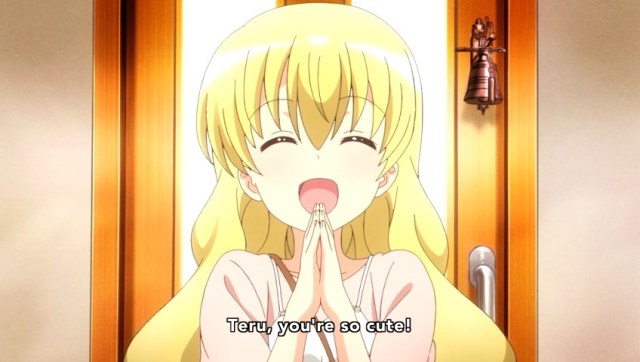 Kou who is a half-angel but the raw healthy food that she makes is more often than not hazardous to one’s own health…despite them sometimes being effective. I like Kou more even though she is a one-trick pony…at least she does her shtick very well whenever she shows up. 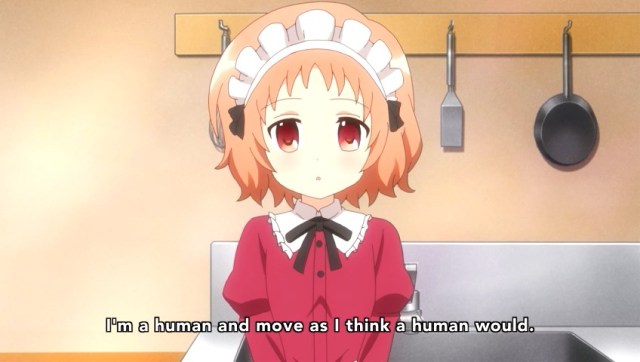 Sonobe, the token “mysterious origins super maid” character who may very well be the quirkiest of them all. Words do not do her justice so trust me when I say that Sonobe is AWESOME! Also she is a yuri shipper and takes full advantage of her “shortie” appearance.

As for the yuri there are some viable ships besides this one here. Funny enough two of them feature Nishiyama. The third one surprisingly features Lady Yoko. Her destined sweetie is a sweetie herself and another side-character to highlight but I prefer keeping her identity a secret to readers who have yet to watch this show.

One gripe I have with this show is that there are times where the characters look like they are talking to someone but there is no one there. Was this a mistake on the writer’s part? How very strange…

Overall Sansha Sanyou is a standard Girls Club that stands out thanks to its mostly likable quirky cast and impressive animation. While not one of my personal favorite Girls Club shows out there it definitely is worth checking out for GC aficionados. Just gotta put up with TWO lame guys who are for the most part harmless.

Yuri and Slice of Life are my anime passion.
View all posts by OG-Man →
This entry was posted in G-Views and tagged comedy, Sansha Sanyou, school life, Slice of Life, Three Leaves - Three Colors. Bookmark the permalink.