Like last time this review was written by someone who has not read the original nor had any emotional attachment to the classic Sailor Moon anime series, someone who was interested in this reboot because it got to the point. The first two seasons of the reboot had mixed results. It would seem that Toei took the complaints to heart and tried a different approach with this latest season. Were the changes favorable? Let us find out as we take a look at Sailor Moon Crystal Season 3: Infinity.

Check out my review of the first two seasons HERE.

Also I would like to give mad props to Dr Animaniac for helping improve my viewing experience of the show by sharing her knowledge of the original manga Crystal is heavily based on along with her weekly coverage discussing just that. 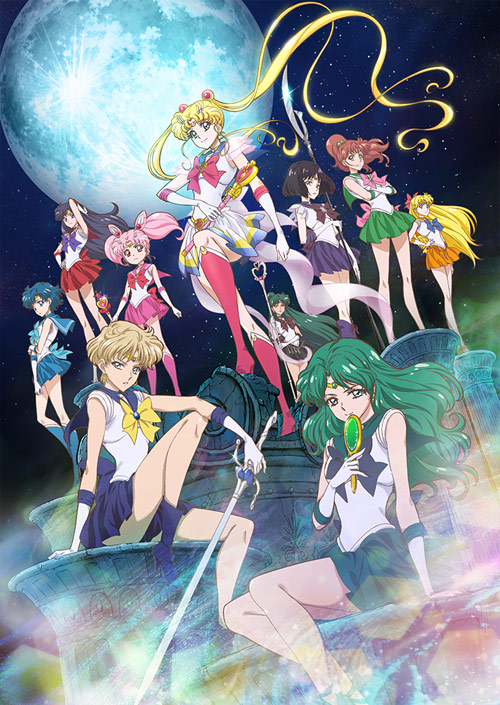 Plot Summary: A new alien force dubbed The Death Busters are out to cause trouble. Add alongside that some new mysterious heroines who look a lot like the current Sailor Guardians and apocalyptic dream visions and we got what is possibly the biggest Sailor Moon adventure yet.

To recap my overall thoughts on the previous two arcs, the Dark Kingdom arc was solid and the Black Moon arc sucked.

Now for the show as a whole. First of all let us look at what has not changed. The “fast forward pacing” is still there, meaning there were very few segments featuring the characters in their daily lives going on casual adventures, beating up monsters and having some important life lessons by the end of it. For the most part it was all about getting from Point A to Point B. Like last time I like this approach because it focused on the main plot as whole to help give me an idea on what the big deal is about the arc, its baddies, important moments for our hero and heroines and other big stuff like that. Secondly most of the fight scenes are less than 3 minutes with barely any punches, kicks or throws, meaning most of the baddie generals got a few good shots in before getting obliterated. It was mostly a lot of dodging and relying on super special moves. Like I said last time it is like playing a Super Smash Bros match but only using the special attack button. There may be others but these two are the most noticeable things that stayed the same.

Now for the first big favorable change, the presentation. In the previous seasons the animation was tolerable to some but disgraceful to many. Season 3’s animation feels more like a modern Sailor Moon remaster would look like, giving the 90’s anime a fresh coat of paint rather than a poor 3D CGI makeover. In videogame terms it is like comparing the classic NES Mario games to their glorious SNES Super Mario All-Stars remasters, unlike the previous two seasons that were more like the mediocre Earthworm Jim 3D compared to the classic EWJ 1 and 2. Yes the animation did drop in quality a couple of times but compared to last time this is a massive improvement. Thanks to this the super special moves and character motions all looked much crisper. The soundtrack felt similar but was somehow more powerful. The OP was not as energetic as the previous one but the three EDs made up for it giving fans diverse flavors. I love the HaruMichi ED, the Chibi Usa one is adorable and the third one is fine for TUXEDO MAAAAAAAN fans. So yes, well done on the presentation.

The “fast forward pacing” is still there but most of the time it felt like a lot was accomplished even though this arc was the same length as the previous seasons. Sometimes not much progression was made but in those cases there were relevant events to justify the slow progression in less eventful episodes.Even the more “chillaxed” moments were better presented and more fun to watch. As a bonus, people who have yet to watch Crystal but are still somewhat curious, the premiere episode gave a brief yet effective summary of the important events of both previous arcs, meaning everyone other than “completionists” can save themselves the trouble and skip the Black Moon arc entirely. Then again there are some who liked the Black Moon arc so…yeah. Readers who liked said arc can ignore my disdain for it and enjoy it if you so wish. Anyway another plus goes to the improved pacing.

Now on to my thoughts on the Death Busters/Infinity arc as a whole. According to Dr Animaniac’s weekly analyses Crystal 3 followed the manga version of the story very accurately with some minor changes here and there. From what I saw, I think this was the best season of the franchise yet. All the new Guardians and a returning one that I greatly missed after the Black Moon arc were all spectacular and appropriately enough the best parts of the season were when they were on screen. Not to say the main five did not have their moments (Sailor Mars still rocked my world whenever she got the spotlight) but the new Guardians stole the show every time. That simple. Another surprise addition was that this accomplished something refreshing, it made me REALLY like Chibi Usa compared to the second season where I saw her as a nuisance up until her character development began. More on that in a bit.

I was anticipating this season for very obvious reasons, mainly to finally understand why Haruka X Michuru are one of the greatest yuri tag teams of all time. The yuri was strong this season as I had hoped. The execution however, varied between couples. Both were done very well but I felt with HaruMichi I witnessed but a portion of their true power. Granted it was a BIG portion so I cannot complain because I now have an idea of what makes both ladies legendary separately and together. As for how purists feel…it all depends on how they feel about manga interpretation compared to the 90’s show but which one is better is not my call to make. I understood both ladies better, especially Haruka after watching this season and I am content for the time being.

ChibiTaru on the other hand I knew little about outside of some fanarts but after watching this season…I mentioned how I like Chibi Usa a lot now…Hotaru made Chibi Usa into a better person in more ways than one. ChibiTaru’s story was spectacular, especially with it being the second most important plot. Hotaru was spectacular and stole the show even more than the sexy beasts on a couple of occasions. In both pairings some changes were made and as far as I am concerned, the ChibiTaru changes were the best of all. I just hope Toei will do the right thing and keep up the momentum going into the next season.

Overall Sailor Crystal Season 3 was a massive improvement over its predecessors. Will it change the minds of diehard fans of the 90’s show? I doubt it but manga fans will more than likely be pleased…most of them anyway. I may be wrong. I am not good with sensing what exactly diehard fanbases want. I have a hard time understanding what diehard wrestling fans want. Anyway for readers who thought the first two seasons of Crystal were acceptable at best I can proudly say that this season is definitely worth checking out. It finally made me a big time Sailor Moon fan who will EVENTUALLY check out the “chillax” episodes of the 90’s anime to learn more about HaruMichi’s power.

Thanks again to Dr Animaniac for the fun times discussing this season and helping me understand some thing, especially with the two yuri pairings. Here is hoping the next season will not mess either pairing up, ESPECIALLY CHIBITARU! Modify the story in the Nation’s favor without changing the main plot too much.