How to describe this show…hmhmhmhm. I’ll do my best. This is Yuri Kuma Arashi.

Be warned that like the anime this review will not be safe for work.

For viewers who wish to talk about the ending, go here: 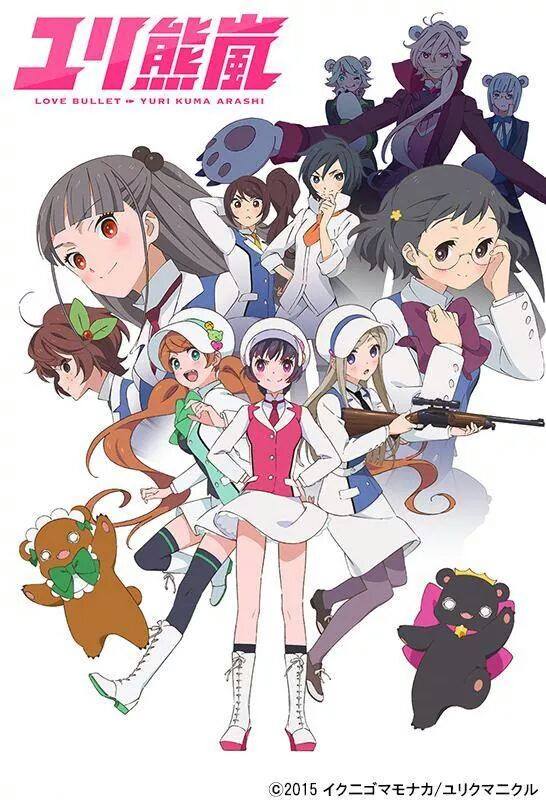 Plot Summary: Far off in space, the asteroid Kumaria blew up, sending bits and pieces to rain down on Earth. For reasons unknown, this causes all the bears (“kuma” in Japanese) to simultaneously rise up and begin attacking humans. Finally, a giant “Wall of Severance” was built to divide them from each other and end their ceaseless war and hatred. In the human world, at Wuthering Heights Academy, Kureha and Sumika are friends who’ve fallen in love. When they find a lily blooming in their favorite flower bed, their eyes meet…and all at once the Bear Alarm starts ringing, signalling that the human world is under attack.

First of all it needs to be known that this anime was directed/produced (or at least had his handiwork all over it) by one Kunihiko Ikuhara. The man is heralded as a god of scriptwriting thanks to his past works of Utena, a bit of Sailor Moon and Mawaru Penguindrum. He’s worshiped in a similar manner as Hideo Kojima but not quite as mainstream. So this guy is known for two specific things: 1) He likes to make his viewers think about what they are watching. 2) He likes to toy with viewers’ emotions. Whether the viewer enjoys the ride or not they cannot say it was a “normal” one, even for anime standards. Basically this show’s narrative is the way it is on purpose.

Reason I started the review this way was to emphasize the point that this show is weird, chock full of symbolism and profound messages around every corner and in order to figure out the hidden messages one will need to often think outside the box. HOWEVER, this does not mean the show is inaccessible to casual yuri or curious viewers. The first three episodes’ purposes are to introduce viewers to YKA’s world, its denizens and their twisted mannerisms and worldviews, the world’s cooky but strangely logical culture and gimmicks. Episode 4 and onwards retains the madness but slowly begins unraveling what the main plot is, character motivations (good and bad) and flashbacks that make sense and are not random. Basically casual and curious viewers need only be patient and everything will be cleared up in time…which is usually how any good storyline works come to think of it.

Either that or it is an excuse to get fluent “Ikuharan” speakers to play bingo and identify tropes often used in the guy’s works. I guess casual viewers could also play along. Yes, many of these tropes do pop up in the show besides the heavily marketed ecchiness. Speaking of…

The fanservice actually has a reason for being the way it is other than using the Monogatari-Saga’s sexology infused dialogue heavy approach to storytelling. See, it covers a debate between yuri fans on what exactly it is they want in their yuri. You have one side who specifically prefers pure yuri and anything beyond kissing is seen as blasphemous, possibly even kissing for some. The other side embraces yuri in its simplest form, girls/women lusting, desiring and loving each other both as beings who exist and their bodies. Of course there are those (even some characters on the anime show this mentality) who only crave raunchy lesbianism and all the sexual goodness pertained to seeing two ladies “doing the macarena”.

Continuing from the above explanation another one of the many messages the show conveyed was the argument of how Japanese (or possibly any large rural society) society views lesbianism or anything deemed different (to this day) from the cultural and religious norms of said society, what it means for the people labeled as “different” and why society unfairly views these “outcasts”s beliefs and worldviews as bad. Either that or the unfortunate “eh. It’s just a phase” mentality towards homosexuality, especially lesbianism. This also includes how the uneducated react towards lesbians. And yes, the “infamous” “but they’re both girls” trope rears its ugly head in a subtle manner at some point during the show.

Having mentioned some of the deep themes covered on the show it may seem like this show is most intimidating. However, believe it or not, (even Ikuharan speakers agree), YKA is the easiest of the guy’s work to follow. See, despite all the hidden messages about society and the yuri fanbase the main plot is very simple and familiar. YKA’s main plot is a lesbian love story about two girls from different races (or in this show’s case species) overcoming the prejudices of both their separate worlds in order to find the answer to the big question: What is (romantic) love? or “Is your love true?”. Our ladies and others have their own journeys to take in order to find the answers they seek and once they find them will they be ready to face the ultimate truth?

One minor trait I appreciated is that during the more violent moments the show never resorts to bloody and gritty brutality. All of it is either cartoony or symbolic. I do so appreciate shows/games that once in a while have brutal imagery that has viewers imagine how violent the pain or suffering was rather than graphically show it, for example gunshot wounds and gang beatings.

Watching this show’s animation felt like a storybook come to life. It may sound corny but I am a sucker for shows that combine old-school with modern animation and throw their own spin into the mix. The CG claws are harmless. The soundtrack is second to Koufuku Graffiti as my favorite of the Winter 2015 season but this show’s “perfect motivation to have sex” OP and fun ED are my favorites of said season with KG’s coming in second.

Bringing up one of the guy’s previous works he was involved with to explain my character portion of the review, Mawaru Penguindrum, despite the profound messages he and team PD wanted to convey that show’s main problem in my eyes was that around the 2nd half there was almost no one worth caring about because they were unlikable doodoo brains (Others will disagree). Not so in YKA. Almost everyone who is meant to be likable is likable, those who are pitiful are pitiful and The Invisible Storm is intentionally pathetic. While Ginko is awesome and Kureha goes through a mountain ton of emotions, there are two ladies who stole my heart:

Lulu and Mitsuko. One is a heroine who has all the qualities a likable heroine has, both good and bad. Ginko does also but Lulu won me over more. The second is a hero not everyone wants but all deserve, a definition of perfection and omnipotence in all yuri. One of yuridom’s greatest heroines, Mitsuko Yurizono.

Oh and yes there are male characters. The judge, jury and prosecutor of this world, The 3 Lives who represent the three best traits of a likable male, sexiness, coolness and beauty. Basically they are observers, guides and fabulous peacekeepers with sweet catchphrases besides the now iconic “gao” that was once thought lost after KEY’s Air concluded. Of course like everyone else there is more to them than what I described.

Now for the villains, or rather misguided people with twisted beliefs, the Invisible Storm. This is an Organization whose main goal is to maintain order throughout the world they live in in order to be accepted by society. Again they are not evil, just scared whelps willing to stoop to any low possible in order to be accepted by the higher ops of their world for doing “the right thing” according to said world’s norms and values. Of course like all organizations…there are cracks. I’ll leave it at that. There are other antagonists who are far greater than this group is but why spoil the fun?

As for the yuri…think Sakura Trick but instead of kisses from here to Timbuktu it’s high intensity level skinship in most episodes. Like the former this is one show not suitable for children.

Overall, while I thoroughly enjoyed Yuri Kuma Arashi and proudly deem it my Winter 2015 anime of the season it is not for everyone. This anime will test viewers who claim they are okay with weird stuff. Despite the straightforward main plot, all the symbolism and weirdness in between could be a bit much for casual viewers and the curious. Perhaps even some Ikuharan speakers may also not be satisfied with this script (especially Utena loyalists who believe Utena is one of the best mmmmmmmmotherf’ing anime in the world). If yuri fans want a familiar love story told in a wonderfully bizarre and fantastic way give YKA a shot. In any case tread carefully when picking this one up. Oh and in case people doubt this is a yuri show…it is EVERYWHERE!

PS: If any of what I said is wrong, the guy gives questions and hints but has the viewers themselves find the answers. Whether they are right or wrong also depends on the viewers’ understanding. So yeah, this review is what I ultimately got from YKA and it worked for me. Others are free to form their own theories and conclusions.

PPS: As for the guy’s claims that this anime would revolutionize yuridom, frankly I did not buy into the hype too much and was mainly intrigued because it was another 100% yuri show. This too I leave up to viewers to decide. HOWEVER, liked it or not the yuri nation can agree that never in the history of yuridom has there ever been a love story (despite its familiarity) presented the way YKA did.