Japan can write stories about anything, even ones revolving around sexy eating like in those burger commercials featuring bikini babes. This is Koufuku Graffiti.

WARNING! It is not recommended to watch this anime on an empty stomach. 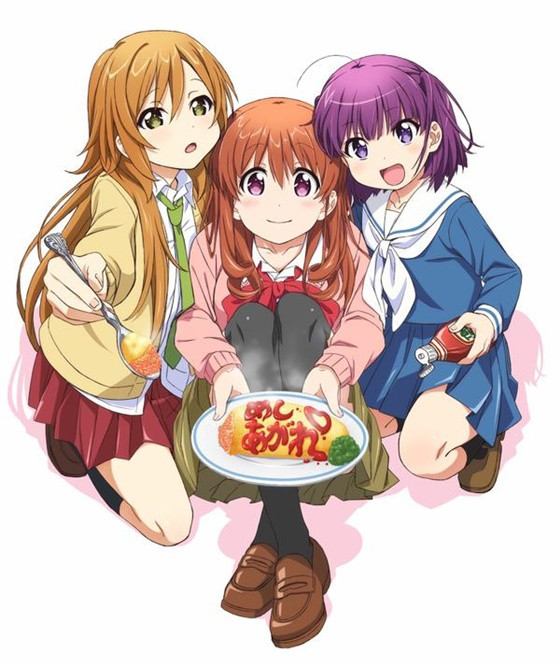 Plot Summary: After her grandmother passed away, high school student Ryō Machiko began living by herself. Although she recreated her grandmother’s recipes perfectly, she felt that something was missing. However, when a girl named Kirin begins visiting her home, she realizes that company makes any meal taste better. Together with their friend Shiina, they enjoy many different kinds of delicious foods together. 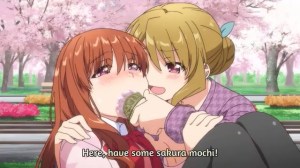 Another amusing part of the gimmick is how in depth the ladies go in describing the finer details of all their meals: All the textures, crispiness, salivating goodness, absolute bliss and wonder found in every bite. It is a most wonderful spectacle every time. These descriptions can also help aspiring cooks who enjoy cooking the meals prepared in anime. I know some animeniacs who were inspired by the dishes prepared on the show. As I hinted at above this anime has the power to make make a hungry person suffer…unless they are dry inside.

Besides the erotic eating Graffiti is a run of the mill Girls Club anime with a strong emphasis on the joys of cooking for people close to one’s heart. Friendship-Love, family, togetherness, cuteness and eating are what encompass this show’s appeal. There is little to say about the morals and the like. They are standard fare for SoL anime and really for viewers such as myself who enjoy this SoL sugenre, why would we look for more than that? It is more of the same as far as Girls Club shows go but when it is done as well as it was here why complain? It is cute girls doing cute things while eating food erotically and with great detail. The show speaks for itself.

As we can see her from the show’s most iconic SHAFT-tilt it is evident which studio picked this series up. It is amazing how well SHAFT can produce Girls Club anime. If only the others they made sell as well as the Hidamari Sketch series had. So yeah the animation is vintage SHAFT…in episode 2. Every other episodes SHAFT’s influences can be spotted but they are not as in your face as ep2 was. Basically ep2 exists to remind viewers this show is produced by SHAFT. So for viewers who do not like SHAFT’s style, worry not for it is only used at full power in one episode.

The OP is my second favorite of the Winter season this show aired, the ED’s pretty good and the soundtrack is sublime. I love this show’s music is what I am saying.

-Ryou’s a kindhearted soul who is the first to reveal the magic of “the gift”. Other than that she’s a lovable sweetheart with a nice body.

-Kirin is the energetic member of the crew who is not good at socializing with adults, is quite athletic and shopped for footwear at the same store Yoshinoya-sensei bought her sandals.

-Shiina is the cool beauty of the group with a mysterious aura. The way she uses “the gift” perfectly encompasses these traits. She is friendly but not the most sociable person.

The rest of the cast as is the norm in Girls Club anime are either likable by default or quickly become likable. There is one character in particular who often teases her presence but takes a very long while before finally making herself known and when she does… 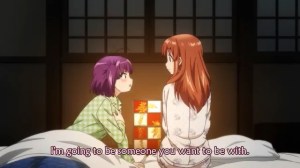 And now it is time for the usual. This pairing is a subtext goldmine. Let me put it this way. RyoKiri got a married lesbian woman who is normally not into anime IMMEDIATELY declare the duo gay after seeing them in action only once. Unless the viewer is a purist denying this couple’s chemistry is inane.

Overall Koufuku Graffiti is a simple yet satisfying show that can make viewers very hungry after one episode, especially if by some miracle their favorite meal is featured. The ladies are easy to like, the music is simple yet sublime,the SHAFT-i-ness is present but not fully exploited and RyoKiri is love. Recommended to Girls Club enthusiasts and gourmets.

Yuri and Slice of Life are my anime passion.
View all posts by OG-Man →
This entry was posted in G-Views and tagged comedy, Cooking, Gourmet Girl Graffiti, Kirin Morino, Kouduku Graffiti, Ryo Machiko, Shiina, Slice of Life. Bookmark the permalink.