Anime about making is nothing new but the fact they exist is much appreciated. The ones I have seen are short though, such as Animation Runner Kuromi. This is the first lengthy one I have seen covering this subject. Is it any good? Let us find out as we take a look at SHIROBAKO.

Plot Summary: A “shirobako” refers to the white box into which a finalized tape of a film is put, full of the effort of everyone who worked on it. Five girls have their eyes set on getting in a white box as they try to find success in the anime industry through writing, production, and voice acting.

I was excited for Shirobako. Besides it promoting a female group as the main protagonists (though they kinda are despite Oi being the clear cut main character). I did not expect the show to go as deep as it did but it is two cour so I should not have been surprised. Shirobako is best described as a believable, dramatized in-depth look at the world of animation, basically an anime about making anime that includes events that are realistic and events that are obviously dramatized to spice things up in a good way. It is also cool that some of the characters, studios and shows referenced are based on actual people in the industry. So it is not just an anime about cute girls making anime though they are part of it.

The show can be split in two kinds of stories. The first one is an in-depth look at how the animation industry works. The show goes in great detail on how much time and effort is dedicated to make one anime alone at a time. I can only imagine how much harder it is working on two shows at the same time. Subjects covered include seiyuu casting meetings, storyboards, event planning, evaluations, racing, the 2D vs CG debate, pros and cons of classic and modern animations and much more. Very few stones are left unturned. In fact so much information is given that at times it was hard to keep up with it all. 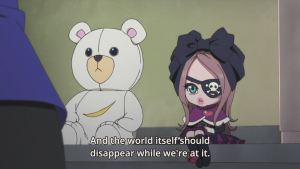 Luckily these two mascots who both serve as Oi’s consciences, with the polar bear being her superego and the goth chibi her id, and guides for the audience that simplify what is happening when they are around.

The second part is the character driven one. If the anime only focused on the animation part it would have been decent. However, it also goes over as many employees of the Musashino (Musani) Animation company and its affiliates as it can, some getting more development than others. So it is another anime with a large cast and it works here because the show makes clear who needs development and how much. The characters who do not need much development do not get it.

Now on to the character development. The characters range from pre/post college graduates to senior employees meaning it has a lot of ground to cover. For some reason this show hit me on a personal level and I could easily relate with our five leads and even some of the employees. See I too (during the time of this writing) have been through college and had a taste of a working environment. I know what it is like working with groups of people in both the young adult and middle aged demographics. During college periods and in workplaces there WILL be times one has to work together with people they do not get along with and the hardships of keeping up with teammates doing one’s best not to fall behind. One character in particular was negatively changed because of this. I appreciated how they captured that part of the work environment without exaggerating (more on the exaggeration later). Something else that felt close to home was one of the leading ladies’ arcs. 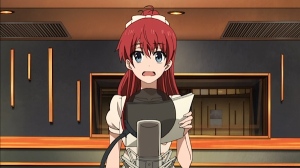 This girl her, Shizuka. Her arc showed audiences both how difficult it is to get a job as a seiyuu and how difficult it can be for a college graduate to get a job…period. It all depends on what the the student studied for and how many openings there are. Unless the person has connections or is naturally gifted…yeaaah. Good luck.

Other brief character arcs to mention are one that involves using one’s talents to their advantage and also one that focuses on discovering, acknowledging and improving these talents. In a bizarre way this show game me an insight into adulthood while still being able to maintain my youthfulness and be proud of it.

As for my fav characters: 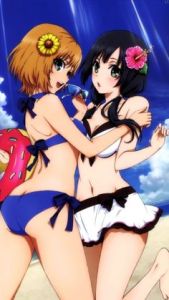 Fav ladies of the Donut Gang are team captain Aoi, Oi to her friends, and Ema-chan. Besides her love for donuts Oi’s appeal comes from her leadership skills, her simple “What do I want to do in the future?” character arc and her being one of the blessed few anime characters with the gift of “1000 facial expressions”.

Second fav DG member is Ema. Shy girl with potential who needs encouragement and believing in herself to go forward. Cliche to some but people would not believe how many humans exist in this world with low self-esteem. Oh and she also has an iconic 48 second scene.

Fav side characters are Goth-Loli-Sama (goth girls rule) and a certain sidekick of Ema’s.

Of course this means there may be some characters some viewers may not like. It is par with the course…except one character who is a douche on purpose…funny story indeed. 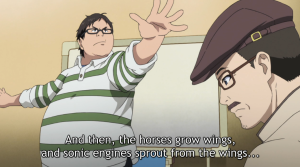 Now I mentioned dramatized in my description of SHIROBAKO. These exaggerations are meant to both intensify the seriousness of certain situations and add the aforementioned spice to the show. The above image is not a great example but there are definitely some wacky and epic moments. One that comes to mind involves a certain built up mangaka. I will leave it at that. The zaniness was most appreciated. Goth-loli-sama for Pete’s sake. However, in a way she is not an entirely dramatized character.

The animation quality…I have been reviewing anime for over 6 years and to this day the animation quality portion of my reviews are usually the weakest. By now I made it clear that if the animation is satisfactory I will take it. SHIROBAKO’s is satisfactory. The girls are cute and sexy, there guys are cool and the show is pretty to look at even though a lot of it takes place in an office building in the middle of suburbia. Viewers who dislike the quality, nothing I can do about it. While the both the first and second set of OP/ED songs and the soundtrack are all good there is only one song worthy of being this anime theme.

As for yuri…I must applaud P.A. Works for accomplishing what I thought had become a lost art for them…making an anime without a shoved in romantic subplot. Yes there are ships (especially yuri ships. Oh yes there are yuri ships) but as far as romance goes…WHO THE HELL WOULD HAVE THE TIME TO WORRY ABOUT THAT STUFF IN THIS KIND OF ENVIRONMENT!? BONUS POINTS FOR THAT!

Overall SHIROBAKO surpassed my expectations. I got an anime about making anime and so much more. Having said that I have no idea who to recommend this show to. It is one of those shows that either clicks with the viewer or it does not.

PS: The below link leads to a special editorial that would have made a great Part 2 for this review, written by King Kai. Check it out.