Yuri Quickie: No Game No Life

How convenient that the premiere post at OG’s Anime Island is also the premiere post for my new Yuri Quickie segment where I briefly discuss the yuri subtext/canon content in mostly non-yuri anime and possibly shows. In this premiere post I’ll be covering the resident from Inamity Kurami and her mistress/obvious soul mate Fil. 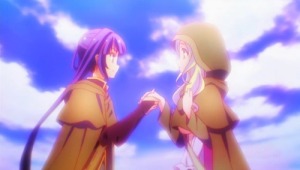 Kurami first debuted as “Blank”s first major challenge since arriving in the world of Disboard and she made sure her boss fight was not an easy one. However that is not what we are here to discuss. This picture here was the first instance that the two were more than partners in crime so to speak. Unfortunately for yuri fans they do not get much screen time on the show. They did get more time together than Shion and Yayoi in both seasons of Psycho-Pass combined at least.

KuraFi can be best described as a flat tsundere and busty honey who is both like a kind hearted onee-sama and lover…kinda like Yuuna and Nanami.

For the time being I will not post the link to my NGNL review but I will say it is recommended and for nation members KuraFi is worth the wait while watching the show.

Yuri and Slice of Life are my anime passion.
View all posts by OG-Man →
This entry was posted in Yuri Quickie and tagged Fil, Kurami X Fi, Kurami Zell, No Game No Life. Bookmark the permalink.

34 Responses to Yuri Quickie: No Game No Life