A very special event took place today. However, it’s personal, so I won’t say what happened. Instead, as my first anime review of 2013, let’s take a look at the 4th season of a show that Slice of Life fans easily labeled one of the three greatest SoL anime series in existence. Doods and peeps, I give to you, Hidamari Sketch X Honeycomb, or HS4.

This show also holds a special place in my heart for more than being one of my early reviews.

The plot of Hidamari Sketch in a nutshell is, a young girl named Yuno who enters the Yamabuki Art High School. She moves and starts living at the Hidamari Apartments. There, she meets the energetic, and talented black hole named Miyako, two seniors in Hiro and Sae and in season 3, two first years in Nori and Nazuna. From there it’s your standard “cute girls doing cute things” formula but what makes Hidamari Sketch special compared to the hundreds of other “Girls Club” SoL anime out there is the presentation.

You see, Hidamari Sketch isn’t exactly a show where the characters are trapped in high school forever, like say, Yuru Yuri, but believe it or not, progress is slowly made and on this season it is very clear that the good times being had in the Hidamari Apartment are coming to an end. What I mean by this is one of the main themes of this season is “change”. Change in the sense of the three main couples contemplating on how their lives will change forever due to graduation looming ever closer, especially for Hiro and Sae.

Yes, the subject of graduation and change within a group of friends who will be forced to split up (Depending on which universities each one chooses to attend) has been tackled several times in other SoL shows. Heck, one of my fav shows of 2012, Tari Tari, slowly build up to that moment. However, HS4’s plot centers around this subject and because this is a GOD-tier anime, it delivers the message strongly without having to resort to intense levels of drama. The show has had a perfect balance of light and serious moments ever since the manga’s inception in 2004 and the great SHAFT studio blessed us with an anime version in 2007.

Let me give an example of a serious moment on the show. In episode 7, a childhood friend of Yuno’s, Arisawa, who is currently in college, stops by and asks Yuno out. At a cafe, they sit down and talk about how they’re both doing in their respective schools. The important message of this “sketch” is when Arisawa tells Yuno how important it is to always keep in touch with friends you have made in high school or college after graduating, no matter how lazy you are, at least send them messages or call them sometimes. You never know, you might meet them again someday. It may not seem like much to some, but others, who have had great times in this part of their lives with special friends, it’s an important lesson. Don’t believe me, allow me to direct you to someone who has lived Arisawa’s life and understands her completely.

Hidamari Sketch just has a hard to explain magical effect on those who have seen and enjoyed it from day 1, like me. It has the perfect blend of comedy, slice of life, coming of age, talk show anime elements, important events students go through in their social lives, all without exaggerating the serious moments. It’s a show where you can sit back, relax, take your sweet time forgetting all the bad things in life and bask in the glory of a group of girls doing stuff, waking up to alarm clocks that don’t spoil themselves, spending the evening eating Hiro’s meals for the umpteenth time and conclude with one of the girls (Usually Yuno) having a bath time summary of their day. Yup, little has changed of the show’s humor and all the trademark goodness is still there, as it should be.

While the animation has gone through noticeable changes, everything that has made the show glorious since the first season is still intact. The same goes for the easygoing music.

While the OP and excellent ED are a joy to listen to, imo, no HS song will ever surpass or represent Hidamari Sketch better than the very first one. Thankfully for me, the show still reminds me of The Peanuts Gang after the long absence when season 3 concluded. The 2 SP OVAs were good, but I still wanted a 4th season…and I got it.  All hail melon heads!

Before I get to what’s most important to the site, let’s take a look at how much, or little, has changed in two fan favorites: 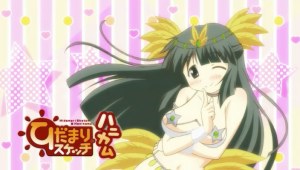 Contrary to what the characters on the show tell you, especially the principal, Yoshinoya-sensei is love. Undeniable love. There is a reason why I comically worship this woman as the epitome of anime womanhood. while I did name Tomoe-sama from Queen’s Blade as the sexiest 2D babe of all time, Yoshinoya-sensei is in a tier of her own, GODDESS-TIER! As for what changes she has gone through, absolutely none. She’s still the energetic, lovable, crybaby exhibitionist who under all that sexiness, is a serious teacher who cares for her students (and family). All hail Yoshinoya-sensei.

The only progress made in Yuno and Miyako’s relationship is Miyako now knows Yuno see her as a bishoujo, which coming from Yuno, means a lot to her.

Nori and Nazuna, best of friends on screen, so much more off it.

If you’re a Hidamari Sketch fan and you still do not consider Hiro and Sae a romantic couple by this point, begone. Just begone. As for Natsume, she gets several chances to make a move on Sae and she continues to fail. Now we know who taught Ayano how to pick up TOSHINO KYOUKO…and make little progress. Oh well, at least Natsume has fans, including me.

Sadly, the mystery of The Metapod Kid’s origin remains unsolved and will probably stay that way.

In conclusion: If they should make a 5th season, it has to be the last, for Honeycomb has perfectly set up the beginning of the end of the happy times in the Hidamari Apartments. However, it has also shown us that it won’t be a sad end, only the beginning of a bright future where Hiro and Sae will reunite after college graduation, get married and have a yuritastic honeymoon…unless Natsume finally decides to make her move. Anyway, Honeycomb proves once again why Hidamari sketch is the best Slice of Life has to offer next to Aria and Natsume Yujinchou. For Slice of Life and HS fans only…unless this review has convinced non-SoL fans to pick the series up…which I highly doubt considering hardcore otakus being born with ADD and HDD.