Hey doods and peeps, welcome to another episode of the G-Views. Here’s a show I wasn’t expecting to be as entertaining as it turned out to be, even with its evident flaws. Let’s walk the dog and  the “hottest days of Summer”, or in this show’s case Spring, in Dog Days. 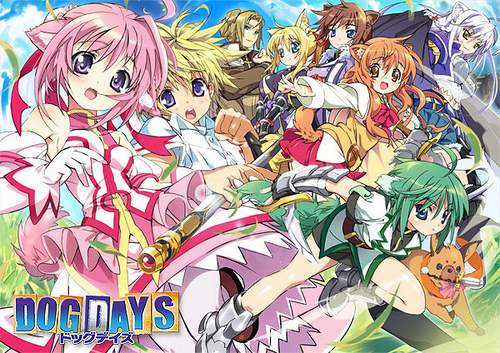 Important note: For those expecting cat and dog puns, I’ll save you the agony of having to read them and keep them at a bare minimum. Okie dokie, on with the review.

Genres: adventure, fantasy
Themes: acrobatics, catgirls, dog girls, fanservice, other world
Number of episodes: 13
G-Rating: 7/10
Plot Summary: In the land of Fronaldo, the Republic of Biscotti has been aggressively attacked by the Lion Kingdom of Galette. Facing potential defeat, Princess Millhiore summons a hero who can save the country. What she gets is Izumi Shinku, a middle-school boy from Japan. Awaiting him in Fronaldo is the task of becoming hero enough to defeat his enemies while learning the peculiar rules of battle in this strange new world. 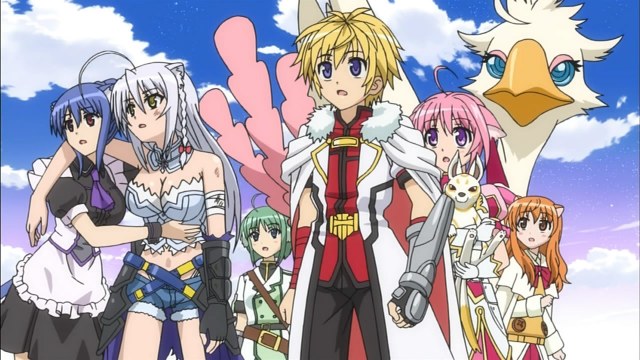 The plot is so classic JRPG fare that I won’t make a “ooh this is lame because it’s cliche” comment.  Why? Because I welcome it, being a JRPG (RPGs in general) fan and all. I also welcome the lighthearted feel the show provided. Seriously I have no need to go into detail on what to expect.  I had a good time watching the show for the most part. It was cool seeing classic one JRPG trait after another. I also liked the Japanese/Italian mix of names and certain pastries used. It’s little things like this that amuse me.
Most of the action scenes, or rather war battles make me think of game show like “American Gladiators” and “I’m on a Japanese Game Show” since they’re like obstacle courses with duels in them, like Dokapon Kingdom. It’s still funny watching deafeated soldiers from both the cat and dog side blow up in puffs of smoke and turn into fur balls with their respective breed’s body parts. The only exception being the show’s official final battle before the 2 part season finale.
I knew that due to the show’s theme of cat and dog people that they’d be using typical gags involving said animals such as playing frisbee, doing basic dog tricks and the most recurring one…petting their head or in a cat’s case, rubbing their bodies for some purrfect action.

Animation: Quite colourful, just the way I like it when watching an Adventure anime. The breast  physics are abnormal as expected but thankfully isn’t pushed down our throats.

Characters: I’ll keep this short by saying that my #1 fav character on the show is of course Leonmitchelli Galette des Rois.

Besides being a badass in combat and her voice actress giving her a mature voice, I’m attracted to her for some reason and no it’s not just because of her large rolled up yarn balls…okay maybe they do play a large role but seriously she is one tough chew toy on the battlefield. A woman who is at least 5 feet wielding an axe. Good stuff.

Next up is the male lead, Cinque (5) Izumi, who reminds me of the following person, personality, charisma, fan demographic and stamina:

Jokes aside, #5 is your basic Chosen One type character. He’s inexplicably athletic, learns special moves quickly, fearless, good with the ladies (Even the stereotypical tsundere…of course). Thankfully the most important belle femme isn’t charmed by his fiveness.

I could talk about the other characters but really there isn’t much to say since they all fit a specific stereotype of sorts. the positive thing is that none of them are annoying (At least I wasn’t annoyed by them).

Like I said above, for the most part the show was fine and dandy…until the two part season finale. I have a few complaints about these two episodes:

1: Did you REALLY need two episodes to illustrate this occasion?

2: The Disney-esque Deus Ex Machina. Seriously, W..T…H?! I know this is meant to be a lighthearted kids show with some mild fanservice here and there (Yes, a nude body with breasts covered by the person’s hair and big boobs are mild in this case since they aren’t excessively used…though the same gag 3 times was a bit bothersome) but C’MON! Doods, this is NOT old school Disney! I could go on and on about how much the ending pissed me off but it no longer matters.

I have a few requests for the 2nd season that I’m definitely sure the writers will be stupid enough to piss me off with by not fulfilling:

1: ABSOLUTELY NO HAREMS OR LOVE TRIANGLES!

2: Tag team with 5’s senior. She was cool for the very short screen time she got.

3: Leo continues being the best character and doesn’t end up becoming “another victim”.

4: The source of darkness will be revealed.

5: Bacon and eggs served for breakfast per break time episode.

For the writers’ sake, they had better not piss me off.

In conclusion: Complaints aside, this was a more fun than expected show that proves you don’t always need death, angst and emoness to make an entertaining show. I don’t know why this show is called a ripoff, clone or whatever, I enjoyed it and don’t regret having watched. I’ll check out the 2nd season for sure…just remember my warning writers…The OG-Man will be watching you..or else, The G-empire’s comin’ for ya suckas!

Oops, almost forgot. If you’re neither a fan of classic JRPG scripts or have an allergy towards animal themed humans, then you know where the doggie door is.

I should REALLY spank myself with a paddle in the ass for what I’m about to do next but…the internet meme virus has infected me for one review.

The answer to the question is Michael Vick.

Hehe, another anime that has nothing to do with Halloween…unless you count going trick or treating as a cat/dog person. Dang, I didn’t know this poster was this big. Oh dear.

Yuri and Slice of Life are my anime passion.
View all posts by OG-Man →
This entry was posted in G-Views and tagged acrobatics, adventure, catgirls, dog girls, fanservice, fantasy, other world. Bookmark the permalink.