Hey doods and peeps, welcome to another episode of the G-Views. Last year I talked about an obscure and quite enjoyable short anime by Bee Train (Best known for their Girls With Guns Trilogy among other productions), Murder Princess. It was quite an enjoyable treat imo. I recently found another rare show in Avenger. Did it fare as well as MP did? Read on and find out. 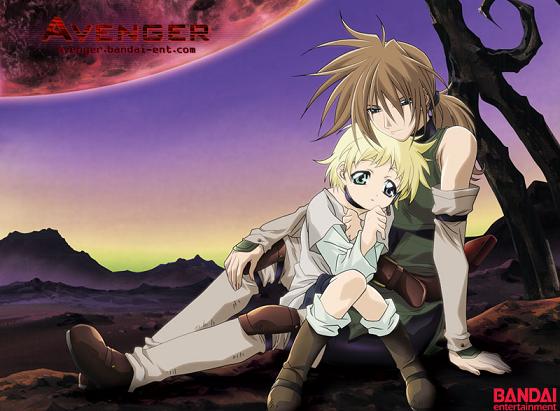 Plot Summary: Mars has been colonized and is a world where children have been replaced by robot servents known as ‘dolls’. Layla is a skilled fighter with a tragic past who travels about the world. Her companions are Nei, a strange and unique doll with some unknown ties to Layla, and Speedy, who is a doll breeder. The founders of Mars see the trio as a threat to their world, and each time they attack Layla and Nei a bit more of their mysterious past and future is revealed.

There are two adjectives I can use to best describe this show: Confusing and underwhelming.
I’ll categorize this show under “ass kicking babe with shrimp” category. Other shows that fall under said category are El Cazador de la Bruja, Michiko and Hatchin (Coming soon to the G-Views) and Noir (I count Kirika as a shrimp appearance-wise). As you can see from the title poster, the show’s about Layla, the titular Avenger character in every sense of the word and her shrimp mascot Nei. They quickly get another companion in Speedy, a Doll Breeder who mostly serves as a manager and guy who tries to lighten the mood when it’s grim and believe me, this show is chock full of angst and silence. You’ll notice many scenes where the characters are either having a staredown or  just looking at the horizon, pondering. I can understand that coming from Layla since she’s obviously had a horrific past and chooses not to talk much. You can see in her visage what message she wishes to convey to others, especially Nei. However, other people, especially Westa with her eternal mope face, do the same thing but with worse results.
One huge problem this show has is plot pacing. I guarantee that by the end of the show, should you choose to watch it, many sentences will start with the interrogative pronoun, WHY? The pacing is downright terrible. So many unanswered questions, unclear motives, inexplicable events,
Example questions I asked myself include:
-Why did he destroy the shuttle?
-Why was she the child of fate?
-Why does he think destruction will lead to salvation?
-Why did she do that all of a sudden? (This one I asked 5 times throughout the show)
-What drew them together?
-How did she come to be in the 1st place?
-Why the football attire?
-Why the inability to “mamba”?
etc.
You’d think a show with a messed up pace would have surprises in store for the viewers. Nope, no twists and turns here. The show reveals plot twists without any effort to provide shock value while leaving many unanswered questions at the same time. And don’t get me started on the ending. It made little sense.
Now with a confusing story, you’d think the action scenes and character interactions are at least noteworthy, right? Not really. The fights range from okay to rushed as some fights end off screen (Thankfully these are usually against the hunters). The on screen fights are decent at best. Nothing memorable.
Animation: As the summary implies, the show takes place on a post apocalyptic setting, Mars to be exact but it might as well be a barren wasteland. The skies differ in color on rare occasions but usually it’ll be red moonlight (Mars is the Red Planet after all). Layla does have a decent body for a stone cold warrior. The population fits the setting quite well as fear, anger, jealousy, greed and misguidance rule over the populace. The characters look alright but don’t expect to be blown away by the animation.
The show’s soundtrack is also underwhelming. I never got into the beat of either OP, ED or insert songs. They aren’t bad, just not memorable. One particular song that baffled me was the upbeat techno tune during train rides where all that was going on was Westa with her eternal face of concern sitting down and saying nothing at all…wow.
The characters:
I can sum up the 3 main characters without spoiling anything in the following way:

You have the stone cold chick of few words, Layla Ashley, who usually fights using tonfas and nimble dodging abilities. She rarely shows any positive emotion which is expressed in a barely visible grin.
Nei is the mascot girl who acts as Layla’s plushie of happiness and not much else.

Speedy is the Jack of all Trades/Doll Breeder/common man who’s drawn to L an N out of curiosity at first but quickly warms up to them.
That’s all you need to know about these 3. Trust me.
The villains: Sure there are more than 1 but really the most important two are:
Volk and Westa.

The football player looking guy is Volk: A moody guy who believes that the only way to save Mars from destruction is by causing more destruction himself.
The blond in black is Westa, or as I like to call her, mopey portrait chick. She spends 99% of the show looking monotone, worrying and pondering while worrying.
Technically they aren’t villains per se, they’re more like the “Good intentions through wrong actions” type of characters. Expect MANY dialogues with Volk talking about saving Mars by nay means necessary, even if it means turning evil and killing Layla, while Westa has her eternal look of concern and tries to calm Volk down. It’s the same damn conversation over and over and over with very little variation or meaning. I’m surprised I haven’t skipped any of them.
In conclusion: There’s a reason why this show isn’t well known or talked about at all. The show wasn’t bad, just forgettable. If you’re really interested in checking this one out, I’d say do it when you have nothing else to watch and aren’t in a bad mood because this won’t help cheer you up.
P.S.: It’s funny that I reviewed a show on Halloween and it isn’t scary at all…unless you count the multiple scenes where music’s playing and nothing’s happening. Anyway, Happy Halloween to all who celebrate this holiday.

Yuri and Slice of Life are my anime passion.
View all posts by OG-Man →
This entry was posted in G-Views and tagged action, adventure, fantasy, science fiction. Bookmark the permalink.