With all 13 members together at last it’s time to see what everyone’s like without emotional tolls.

We began with the three new girls receiving a proper welcome to NijiGaku. Shioriko presented her club entry form to Setsuna believing her to be the club president but she wasn’t. Naturally the 2nd likeliest option was Queen Yu but no. In stepped the coolest, most loved and cutest. Lanzhu? Depends who one asks. Nope it’s Kasukasu. She’s teased by Miss Ai and Mia before announcing plans for a big slumber party at Shizuku’s house in the weekend along with a shopping trip. However, she had her own goal.

To prove she’s the legit club prez and greatest of all time.

The best parts of the episode were these zoom-ins of Kasumin proud of her brilliant plans to show off her greatness.

They all failed of course but Kasukasu’s devotion to proving herself was delightful.

Let’s talk about Plan A for a bit. Rina gifted Karin a kitty trinket. During the shopping trip Mia asked her to join her somewhere. It was to check out the local baseball stadium, because Mia’s half-American. They were a little late to meet up with the others so Kasumin cleverly thought to check out possible places Mia would go. As we all know Karin had a poor sense of direction. Mia didn’t at the time. Rina came prepared with a tracker in the trinket from earlier, which of course was Emma’s idea. Kasumin failed.

As always Yu with her hair down is beautiful plus her girlfriend joined her to enjoy the night sky. She found her working on a new song for her 12 ladies.

The next day Kasumin and Rina unveiled the pink cutie’s new app, Niji High Go, basically Nekomon Go. The gang would split up and find 13 kitties. Kasukasu didn’t think up a prize so everyone the winner would have her wish granted. 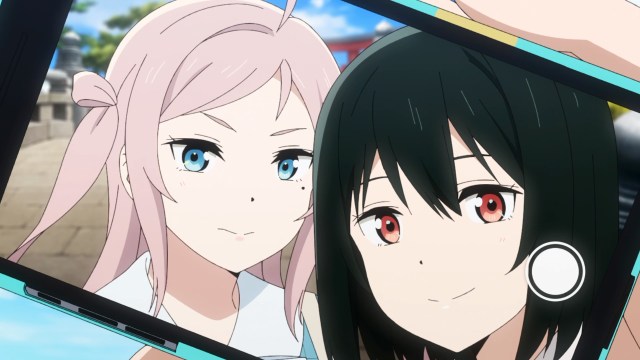 The side-story of the episode revolved around Lanzhu wanting something and Shioriko noticing but whenever she asked Lanzhu backed away. Eventually she cornered her and the lilac one admitted she was looking for a good spot to take a group photo with everyone. Remember Lanzhu’s deal was putting up a strong front because she’s really a meek girl who didn’t know how to make friends. Shioriko, her first real buddy and future wife, helped her take the first step. By the way, Shioriko found her opening after the two and Kasumin found the least number of nekos and Kasukasu spit out her goal of being acknowledged as the legit club prez and GOAT.

Speaking of couples it’s sad that out of all the established ones ShizuKasu are the ones with the least number of intimate moments together. Them sleeping on the train was the closest we got this season, 10 episodes in.

At the end of the game Yu and the others thanked Kasumin for organizing this get together and praised her as a great club president. Not as the GOAT but take what you can get. Lanzhu got her group photo too with help from Shioriko. Lastly Yu won the game and we got a sample of their 12 member song, “Love U My Friends”. Sweet song.

Great stuff as always. After the ED Kasukasu dashed to the club room with a big announcement. We’ll find out what it is next time.