Plot Summary: The “beautiful girl sexy battle action” anime is set on five artificial islands. Mamori is a “mermaid” transferred to one of those islands. When Mamori is attacked, a newly transferred girl named Mirei saves her. The enemy doesn’t stop, however, and the two are soon cornered. Just when they think all hope is lost, Mirei kisses Mamori, and Mamori turns into a sword. Mirei then wields the sword and launches a counterattack against their enemies.

To best describe the show it is a blend of three anime in my head: The raunchiness of Cross Ange, the combat concept of Soul Eater in that one of the girls turns into a weapon and the no-holds barred yuri goodness of Sakura Trick. 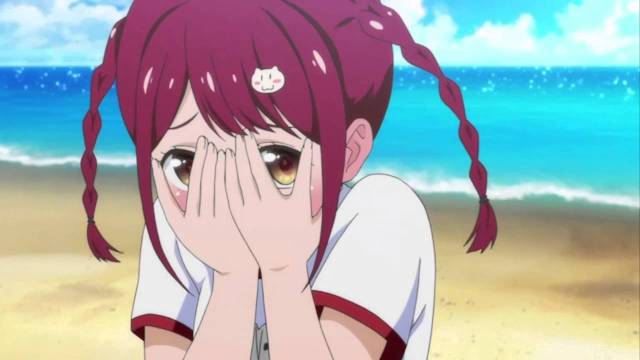 Before we review the show as a whole I must reiterate the point in the introduction. This show, especially the uncensored version, holds almost nothing back. Viewers who are sensitive or intolerant towards anime with borderline hentai content such as Ikkitousen, Queen’s Blade and Seikon no Quaser are advised to stay clear of this one. The reason I did not label this review as a “Controversial Edition” is because this is not the first time an anime like VDM got this kind of backlash. The ones I mentioned also got the same kind of flack. Basically it is more of the same. Viewers who knew what they were getting themselves into yet to chose to continue watching and still got upset afterward…it is your own fault. I sound rude for saying this but bluntness is required to get the point across. 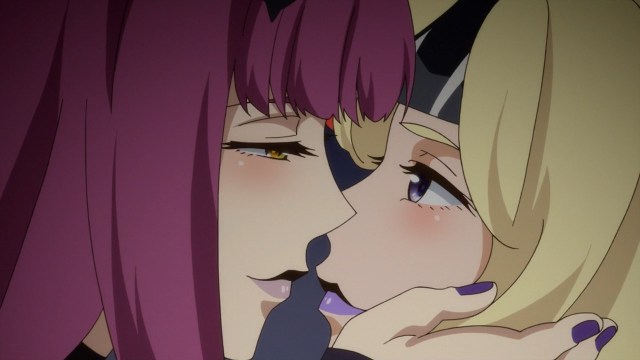 Continuing with the topic of the show’s strong ecchi content, apart from a cringe inducing scene in episode 4 (The reason for its inclusion makes sense but it was still upsetting so I suggest looking away when that moment pops up) and another that is more cliche and stupid than upsetting, 98% of the erotic scenes in VDM are between women. Said scenes hold almost nothing back as the only body parts that are covered are the anus and vagina, meaning watching the censored version is ill advised unless the viewer wants to hurt their eyes by staring at white light. Now that that is taken care of let us talk about the show as a whole.

Similar to previous ECCHIMANIA shows like Queen’s Blade and Ikkitousen and even this show’s predecessor Senran Kagura, VDM is a show where the girls are more than cute and sexy fighters who often get their clothes torn in combat and equally as often get into erotic situations. They all have personalities, struggles, life goals, reasons to fight, people to protect, care about, fight alongside and others to oppose for reasonable purposes. Basically these girls have thoughts and feelings of their own and are not just walking fetishes. Is the script award worthy and strong enough to change the way characters are written? Of course not but the girls are all interesting (and the baddies despicable) enough to convey the intended feelings from interested viewers. Will the story explain everything about the world and its mythos? Let me put it this way, this show can easily get an “animesins” Youtube video similar to Gamingsins or Cinemasins if such a thing existed. The show can be easily nitpicked and bashed. Even so I defend my statement that it is a pretty good show with an interesting enough main story to keep viewers invested.

Of course like most ECCHIMANIA shows VDM early on has several moments where various excuses are given for the girls to show off their assets or the camera to pan to said assets. Nothing new. Snippets of the main plot are thrown throughout the show and sometime near the end of the 3rd quarter the gloves come off.

The action scenes vary in length, getting longer as the show progresses. It cannot be said that when it comes to fights ECCHIMANIA shows do not deliver. VDM is no exception. The last quarter’s fights were gloriously insane.

The animation quality…well the “ta-tas” are most pleasant to the eyes and the ladies meet the sexiness quota, though the mileage on the “ta-ta” size preference is subjective. The soundtrack is enjoyable, especially the kickass OP and delightfully fast ED.

When it comes to the cast most of the heroines and allies are likable, the middle girls are neat and the antagonists are despicable as previously mentioned. Precisely the kind of reactions writers want.

The two leading ladies: Mirei is a gorgeous badass with a bashful side. Nuff said. As for Mamori…As polarizing as Mamori is her arc is, to me, one of if not the most interesting next to Mirei’s. It involves both growing a spine over time and a romantic arc that not only has her seeing the light but also struggling with her true desires and what she has been raised to think. It is a struggle between the brain and heart. Still I can understand some viewers not liking her much.

As for the yuri…do I need to say anything? Fine. Besides the lead couple of Mirei and Mamori the show has other equally noteworthy couples, especially one known as Lady Lady.

Yuri and Slice of Life are my anime passion.
View all posts by OG-Man →
This entry was posted in G-Views and tagged action, ecchi, Valkyrie Drive Mermaid, Weapon Girls, Yuri. Bookmark the permalink.