This show was certainly an unexpected surprise. To think the main reason I became intrigued to watch Gatchaman CROWDS was because of a petite girl who looked super sexy in her casual lingerie with the green ribbon behind her. Let’s take a look at the show and see what I could come up with for a review. 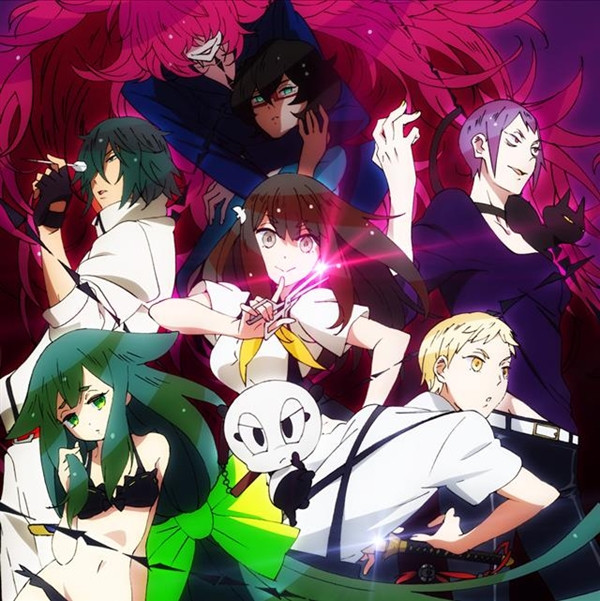 One word of warning before proceeding: If you’re a diehard fan of the original Gatchaman franchise with the ninja teens in bird-like costumes, stay as far away from this show as possible. If you’re open to a different approach to the franchise, read on.

Plot Summary: The story takes place in the early summer of 2015 and is set in the city of Tachikawa, Japan. The city is populated by people known as Gatchaman, who are warriors that fight in special reinforced suits that are powered by the manifestation of spiritual powers of living beings called NOTE. Enter Hajime Ichinose, a 16 year old energetic high school girl who is obsessed with collecting day planners and stationary. She is chosen to become a Gatchaman and tasked with the duty of fighting a mysterious alien life form known as MESS.

First of all, be aware that the show’s plot structure is a bit messy. I guess it would have benefited the show more if it had been 20+ episodes rather than 13. Still, the show can be followed. Just don’t expect everything to be explained by show’s end.

The next topic tackled is digital and mobile communication and mankind’s reliance on them. iPhones, Notebooks and the like are used as sources of obtaining vital information that is being spread worldwide. However, this IS the World Wide Web we’re talking about here. How much of that information is reliable? Can you trust the people behind your monitor? Surprisingly, the simplest topic tackled was humanity’s thoughts on politicians. 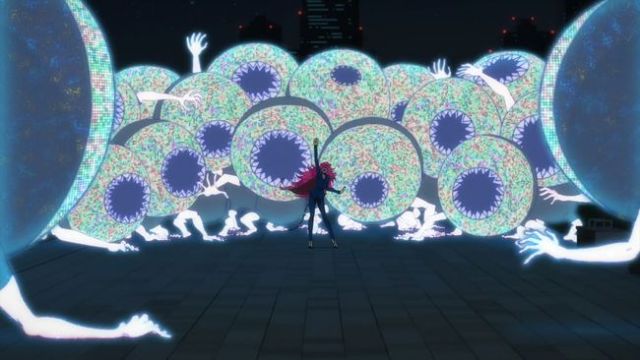 Then there are the titular MESS, that look like people with big round glitching monitors for heads.  The lifeforms are generated by using the CROWDS program. They are more than just “monsters”. They aren’t like the Noise from the Symphogear series. I won’t spoil the details but suffice to say, the MESS aren’t evil. There is really only one true antagonist on the show.

I don’t have much to say about the fight scenes. They’re there but they aren’t spectacular. Still, the Gatchaman armor are pretty cool and worth the wait to see what they all look like as they are revealed one at a time.  And the times when Berg-Katze decides to get serious and fight are pretty brutal. The torture scene in particular…wuuu…

With all of this having been said, one would ask whether this show has anything resembling the original Gatchaman besides names? Yes. You just need to pay attention. Sometimes it’s right in front you. For example, the name of the site where people interact with each other line is called “Gallax”. Guess what the CROWDS users are initially called and what their symbols look like.

For some reason, the animation style reminds me of Kuchuu Buranko, except with no hot live-action Asian nurse. It’s REALLY colorful and dark at the same time. It’s an odd, yet interesting blend to say the least.

The OST is out there. Far out dood! As for the OP and ED, the ED’s okay and the OP…fav song of the season. The beat and the “whack” Engrish and the singer all put an indescribable smile on my face.

I won’t go through all the characters in full detail:

Sugane Tachibana is a by-the-book warrior who follows orders like a good hero should. He initially cannot keep up with Hajime’s free spirited goofiness but once he learns to understand her better…

Jou Hibiki, not related to Condor Joe but might as well have been, is the tough guy of the group. Without spoiling much, he has self-esteem issues. 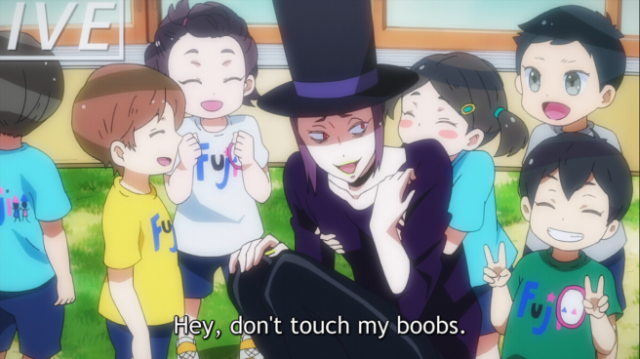 Fav male character is OD. It’s not because he’s fabulous, it’s because he’s a fun guy. Oh, and he has a little secret whose buildup to is better than the payoff, I think. Still, he’s awesome from beginning to end. 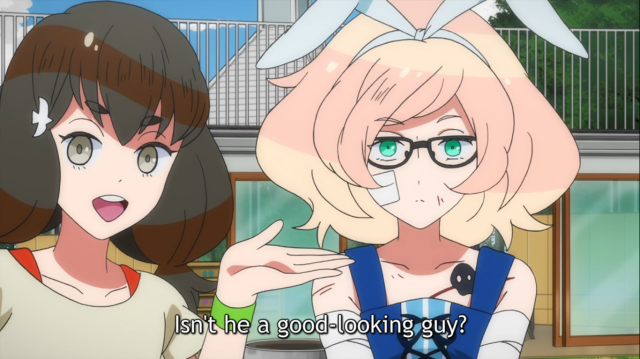 Rui’s gender is revealed in the OP, so I’m not spoiling anything. Besides, he’s a trap for the sake of being a trap and pleasing trap fetishists. Also, Rui doesn’t look feminine enough to be a trap in my eyes. The reaction to the “big reveal” is priceless though. It’s never explained why he disguises himself as a woman. Neither is OD’s gayness. It would have been cool if both were explained but no big deal.

I also have to give props to Aya Hirano for her performance as Mr mini-Panda leader himself, Pai-Pai. Pai-Pai will annoy some people but I can’t stop liking a usually angry toned Aya voicing him.

Berg-Katze, I would best describe him as The Joker with shape-shifting powers and it’s an alien. Its only purpose is to spread chaos around the world…because he can and he wants to show that humans can be easily corrupted. Sound familiar? It is also more fabulous and a hyper-troll. GOOD GRAVY is it a troll, a homicidal troll.

Now then, on to my (unsurprising) two fav characters on the show. First up is Hajime Ichinose. Hajime is a goofy optimist who is INCREDIBLY observant, despite giving off an “I’m living in my own world” aura. Her cheerfulness and free spirited mentality hide the mind of a woman who’s wise beyond her years. She does whatever she wants and will always question what is right and wrong. She never approaches any situation head on unless she knows what she’s doing. Be warned, she can annoy viewers who despise cuteness and happy-go-lucky personalities, just like the 2nd next fav character of mine.

Next up is the oh-so sexy, petite cutie known as Utsutsu. For the first half, she spends most of her time being quiet and saying “I’m gloomy” in Japanese because it’s a play on her name “Utsutsu shimasu”. Other than that, her ability is both a blessing and mostly a curse to her. Hint: Rogue. 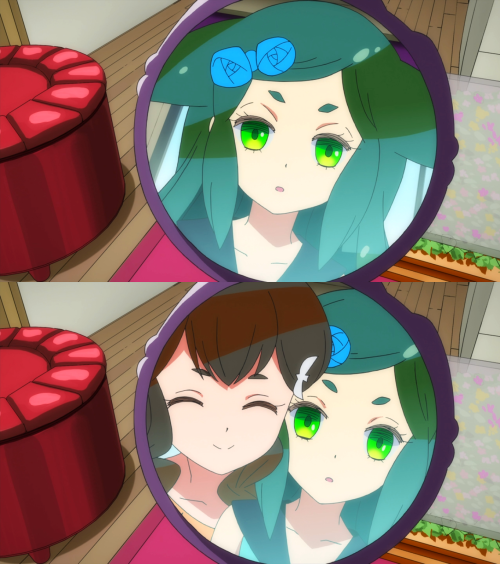 Let’s face it. Utsutsu wants Hajime. She wants to be near her. Hajime doesn’t end up with anybody in the end so…you all know where this is going.

Overall, Gatchaman CROWDS is “whacked out”, in a very good way. The plot structure could have used some more work but it’s not bad enough to confuse viewers (too much). The ending could have been better (Think Mass Effect 3 before the ending update patch.) but the journey more than made up for it. It was a weird, yet strangely profound show in its own way. Hardcore Gatchaman fans will probably cry out “BETRAYAL!” but casual Gatchaman fans open to anything new and other animeniacs looking for something “out there” could give the show a try.

Hopefully like Mass Effect 3, there will be an OVA that will patch up all the glaring holes left by the ending and other unanswered questions fans had after finishing this show.

Source of the Utsutsu picture:

P.S.: Visit the following lady’s website to see a more in-depth analysis of every single Gatchaman CROWDS episode and other shows that tickle her fancy. A good editorial site, Atelier Emily.