Hello and welcome to G-Views, where SoL reigns supreme, moe is respected and Dokuro-chan sucks poopie. Well doods and peeps, here we go again with yet another yuri classic, Kashimashi; Girl Meets Girl. This one’s kinda controversial, and it’s not just for the reason that you all think. 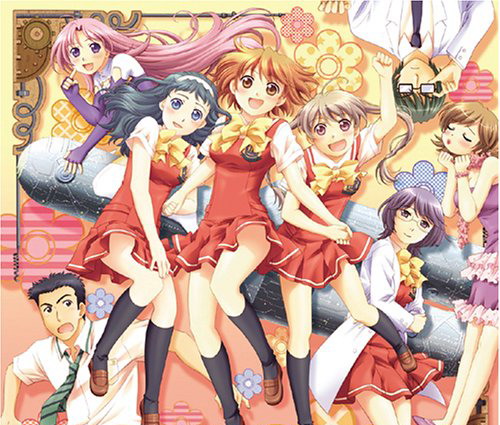 Plot Summary: Hazumu was a shy boy who enjoyed gardening, collecting herbs, and long walks in the mountains. One day he finally worked up the courage to confess his love to Yasuna, but she rejected him. Feeling dejected, he wandered up Mt. Kashimayama to the place where they first met to reconsider his feelings. After getting lost, he wished upon a shooting star which turned out to actually be a crashing alien spaceship. Although he was hit by the falling ship, Hazumu survived the crash thanks to some body reconstruction by the aliens, only they got it a little wrong. Now that he is a she, Hazumu stumbles head-first back into his social life and relationships only to find that the entire landscape has changed.

To summarize this show in one sentence…”It’s a slice of life anime with aliens, a spaceship computer brain taking the form of a little girl called Janpuu, classic over the top parents, an awesome supporting cast and most importantly a yuri love triangle”. There you go, that’s all you need to know about what to expect. Also, about the love triangle itself, you’ll be surprised by just how intriguing it is. Trust me, it has some VERY powerful and dramatic moments that will wow you and show you how deep the love and struggles between these three girls are, especially Yasuna and Tomari.

The animation is okay. It’s colorful but not extraordinary. The girls look cute, the males aren’t deplorable at all (Actually Asuta in particular is one of my favorite characters on the show aside from Tomari). The backgrounds are okay and supernatural effects are average.

The music: Once again the Yuri+Classical music combo is present. They go so well together. As for the rest of the soundtrack, it’s peppy and simple, just enough to keep you interested and relaxed.

Main Characters:
First and foremost, Hazumu is a girl, and mentally always was. Accepting this fact is mandatory to appreciating the show as a shoujo ai show without nagging reservations, and although I’m highly biased in this regard, I think any reasonable person should be able to accept this without problem. The evidence is mountainous, manifest and manifold.

Even as a child, Hazumu was happy to dress up in girl clothes and readily took on the role of Tomari’s “bride”. One might argue that the entire reason Hazumu was resurrected as female was because that’s what she already was inside. That may also be why, even before the change, Yasuna could see Hazumu. After the transformation, Hazumu gives countless large and small proofs that not only is she comfortable with and in her new body, not only is fitting into society as a girl incredibly easy and intuitive to her, but most of all, she is HAPPY. She embraces naturally and enthusiastically all forms of femininity, and it really is (to use the show’s own metaphors) as though she were a seed growing into beautiful bloom, or a butterfly spreading its wings. She is a wonderful, wonderful girl. <sighs and smiles>
HOWEVER, I do have a little problem with her. though I mentioned earlier that the struggles the 3 girls have are deep, I did make special mention to Yasuna and Tomari. why? Because Hazumu’s struggles are the weakest in my opinion. Not to spoil anything, but her woes and worries originate from a, what I consider, selfish desire and lack of decision making.

The series deftly sidesteps any question or discussion of Tomari and Yasuna’s sexuality by putting forth the simple but effective premise that they love Hazumu the person, regardless of body. Since Hazumu the person is undeniably female in addition to becoming one in body, this works for shoujo ai purposes. I’m content to leave it at that, though everyone will have to address how tenable this is for themselves.

So, let’s put that issue aside, and instead focus on the REAL source of contention in Kashimashi…Tomari and Yasuna. Hazumu may be the main character, but in terms of characterization and development, these two are actually the leading ladies.

Yasuna: Many consider her the inferior of the two competitors because her problem is a rather pale and weak excuse for her to be placed in this position. In my opinion though, they made it work here. sure, it can be a bit annoying and a contrived plot device at first, but as you continue watching the show, you can sympathize with her and understand her misery due to her problem.

So yeah, not a fan favorite of the yuri nation but imo, a cool character overall.

But now…what about her rival, the final point in this triangle, who many would say is the real star of the show? Tomari…who could not adore her? Such a tender, easily wounded heart despite her rough-and-tumble exterior. She’s made of gold, but she can really be frustrating at times…prone to overreact and overcompensate, she’s as heartachingly clumsy with others’ emotions as she is with her own. Nevertheless, I like her.

She’s basically the badass of the competitors. Strong, tomboyish, yet delicate on the inside. Yup, Tomari rules!

Now here’s the interesting part, it doesn’t matter who you cheer for to win because they’re both worthy competitors for Hazumu’s heart in my eyes. Here’s the sad part, no matter who wins, you’ll feel bad for the loser. At least I did…until a certain moment. You’ll have to watch the show in its entirety, including the bonus episode in order to understand the meaning of what I just said.

Unfortunately it’s not as great as Kannazuki and Strawberry Panic. Sometimes it tends to get a little too melodramatic and for youngsters the age they are, it doesn’t exactly fit them. Also, not everyone will be able to endure Yasuna’s antics…some might not even like Tomari. (Which is impossible unless you’re not a yuri fan) The musical score also doesn’t help the show that much for some so I can understand if they have complaints against the music as well. So yeah, compared to the previous 2, this one’s more of a hit and miss.

In conclusion: It’s a shoujo ai lover’s show. This is a show that’s about girls loving each other. It is sweet, so sweet…it’s charming and hilarious. It’s also interesting, intriguing, and meaningful. It might even be thought-provoking. There were a few things that kinda bugged me (Most are just nitpicks though). In any case, check it out if you’re interested. Of course like I said, it’s not for everyone. If you liked SP and KnM, you might give this one a shot if interested, but if either of the other 2 shows weren’t that good according to your standards…then you already know what to do.