Strike Witches 3: Road to Berlin Episode 6: A Barkhorn to Pick With You

It was time for Barkhorn and Hartmann to take center stage, or so the preview led us to believe.

We began the episode with the well known routine of the stern Barkhorn and the lackadaisical Hartmann.

Yup. Same old same old. I know I should be calling them Trude and Erica but Barhorn and Hartmann are such cool surnames that I can’t stop referring to them as such.

After the OP the Witches reported to the meeting room for an important briefing from Lieutenant Commander Mio and the grumpy guy nobody cares about. Although the Antwerpen port was still undergoing repairs another, strangely intact, port was located at Kiel. Having said that it was of course guarded by Neuroi. Barkhorn, Hartmann, Shizuka and RAMBO were sent on a reconnaissance mission to see what they’d have to deal with before taking the port. 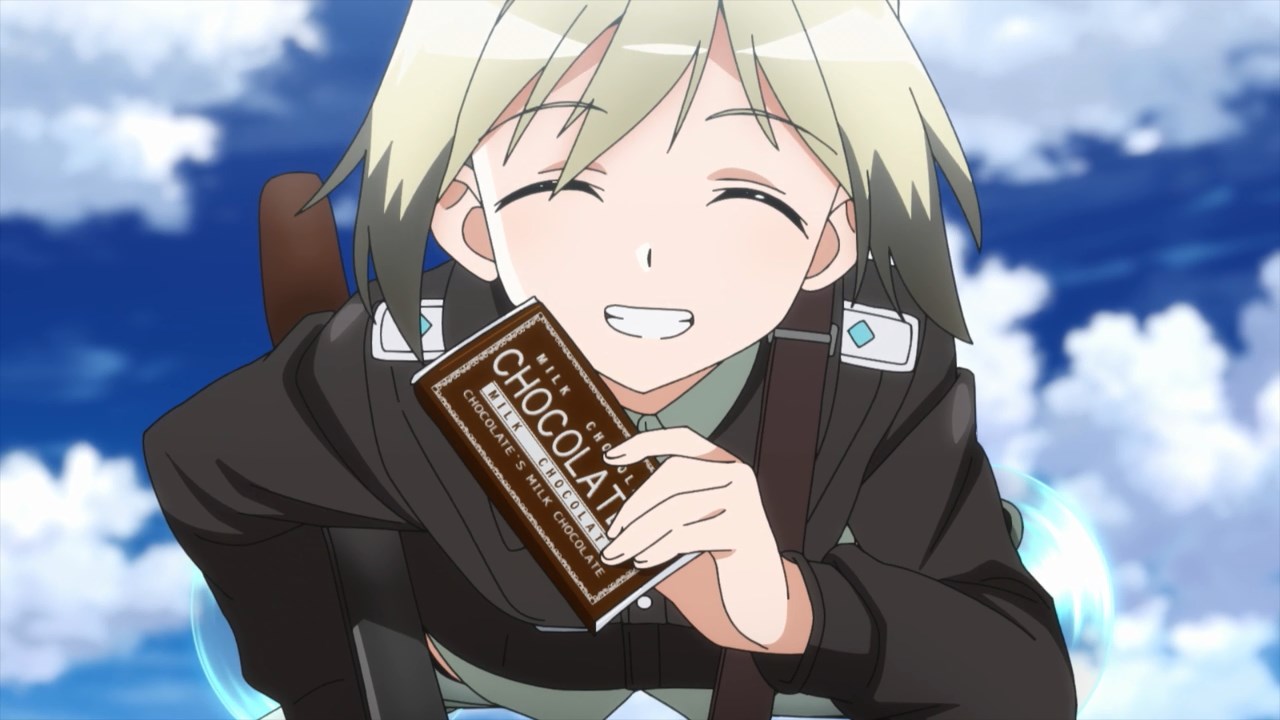 The chocolate will play a role later. Hartmann and Barkhorn were up front reminding viewers that although Barkhorn nagged on Hartmann for her lazy disposition she not only had her own silly side but cared for her. After disposing of low level Neuroi they were caught off guard by a Speed Type Neuroi. They were overwhelmed by both its incredible speed and surprise tactics. 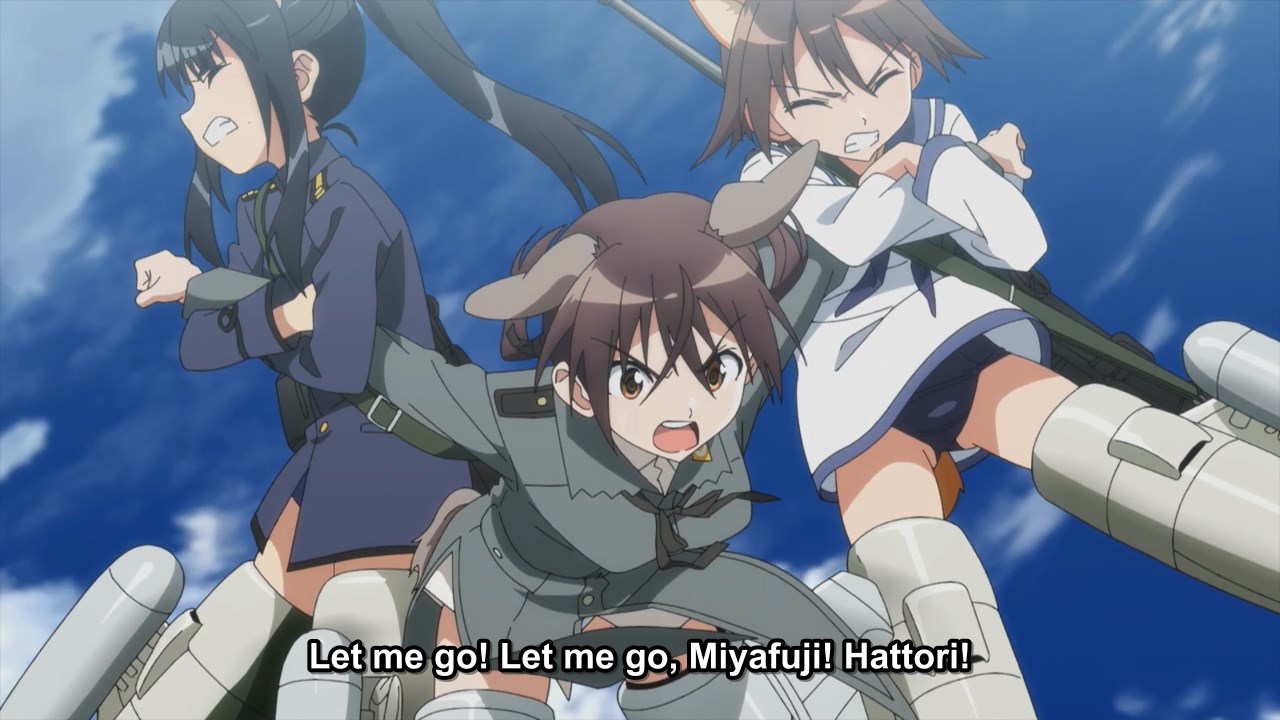 Hartmann went down. An enraged Barkhorn tried fighting back but as mentioned the Neuroi’s speed and tactics were too much for the remaining three thus they’re forced to retreat despite Barkhorn’s righteous fury.

Later Minna found Barkhorn in the sauna, thinking she could calm her down but she’s lost in thought worrying about Hartmann, berating herself and reflecting on the battle. Minna said she’d send a rescue team with Charlotte on the team since she’s the speedster on the team. The next day however, Barkhorn told Charlotte her speed wasn’t enough to take on that Neuroi.

Meanwhile Hartmann made a decoy “corpse” to keep the Neuroi from tracking her. She only had water and the chocolate bar to sustain her. 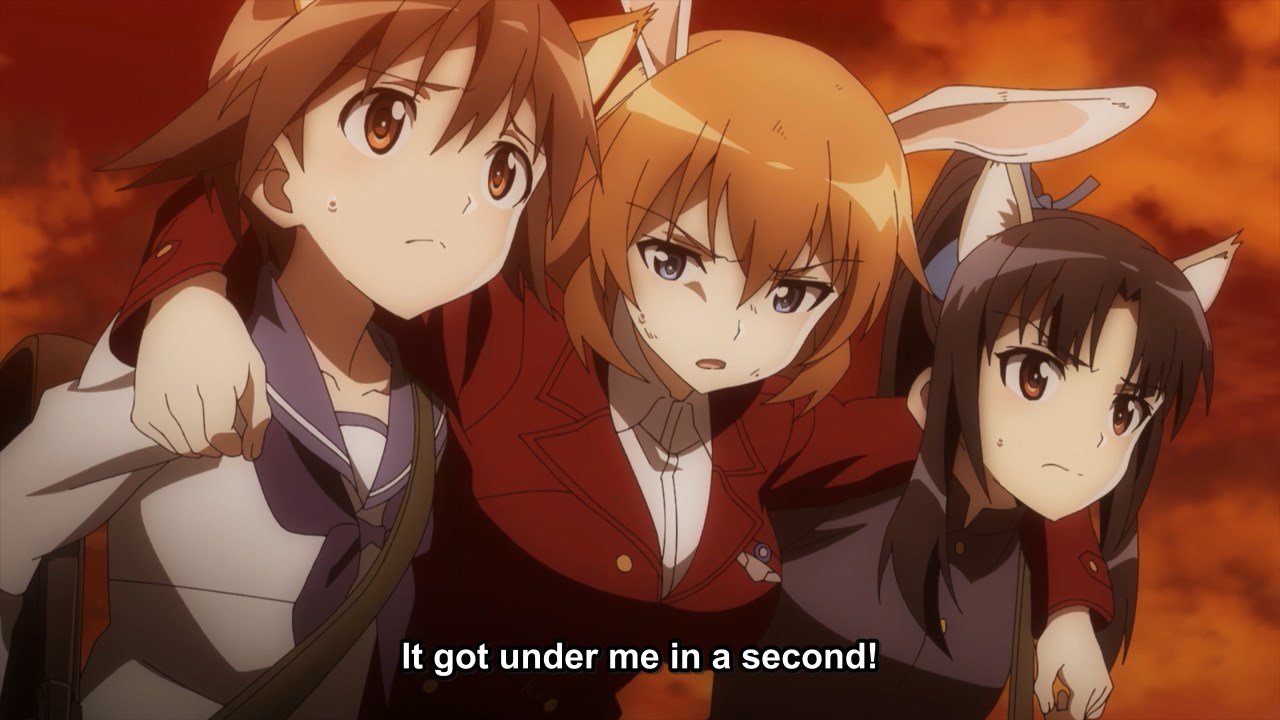 Barkhorn was right. When Minna told her about their failure she pleaded to let her go again.

Later she went to Charlotte for a huge favor. After a, most likely, sleepless night Barkhorn was ready to reveal her plan to combat the Neuroi. Thanks to Charlotte they modified her Strike Unit in a way it could keep out and potentially surpass the Neuroi. But that was only part of her plan. 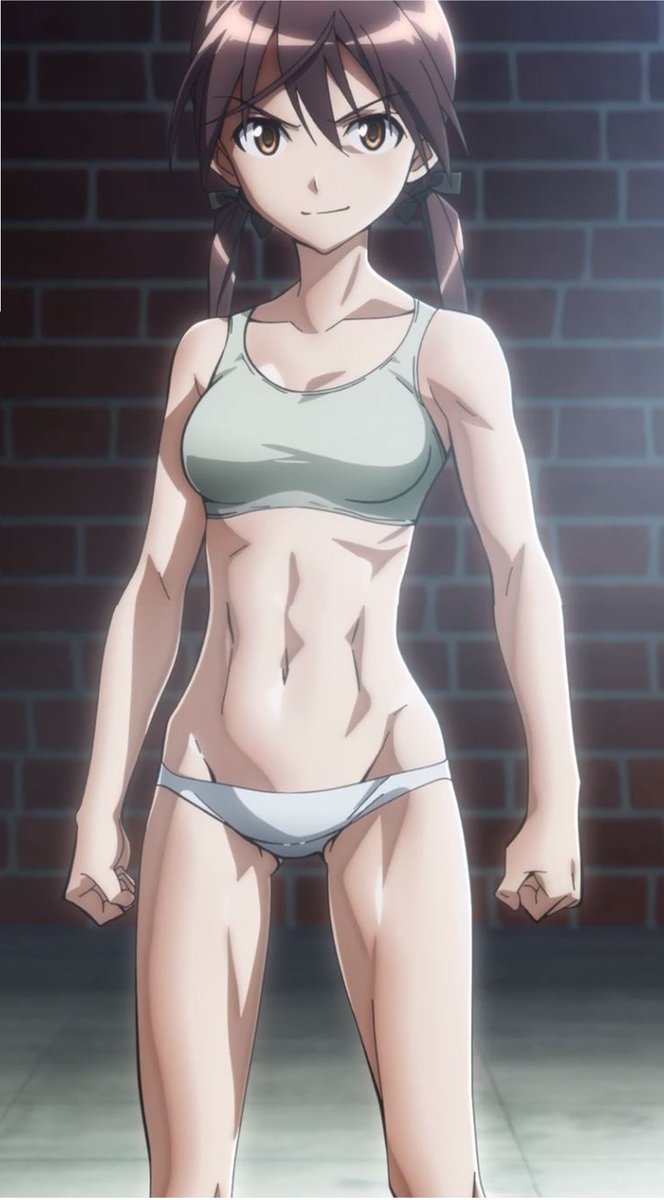 A gif of her revealing her gorgeous new physique would be lovely.

As we can see the other part of the plan was to obtain the perfect body to handle the new Unit. It took days (probably 3) of exercise, without eating or sleeping and hours in the sauna (and maybe her magic) to achieve this. There’s good reason why she didn’t go commando since the idea was to shed everything that could potentially slow her down.

With her new Unit and rock hard abs she made quick work of the Neuroi. However, she mistook the decoy for a fallen Hartmann and lost the will to live. Sad and passionate moment short Hartmann was the most important person in her life and without the girl she loved she’d little reason to continue fighting. She said this as Shizuka and RAMBO shielded her from another Speed Type Neuroi from outta nowhere.

Oh, and she used Hartmann’s first name. You know that means.

One thing I didn’t mention earleir. Ever since the first rescue attempt Hartmann’s communicator could hear nearby comrades but it was one-way. She heard Barkhorn’s passionate sadness as she rushed over to light a signal and snap her back to action.

Relieved her sweetheart was alive she went Super Saiyan and more awesomeness ensued, as if her prior pwnage wasn’t badass enough. Even Hartmann got a chance to finish off the Neuroi in style.

Anime girls are the best. 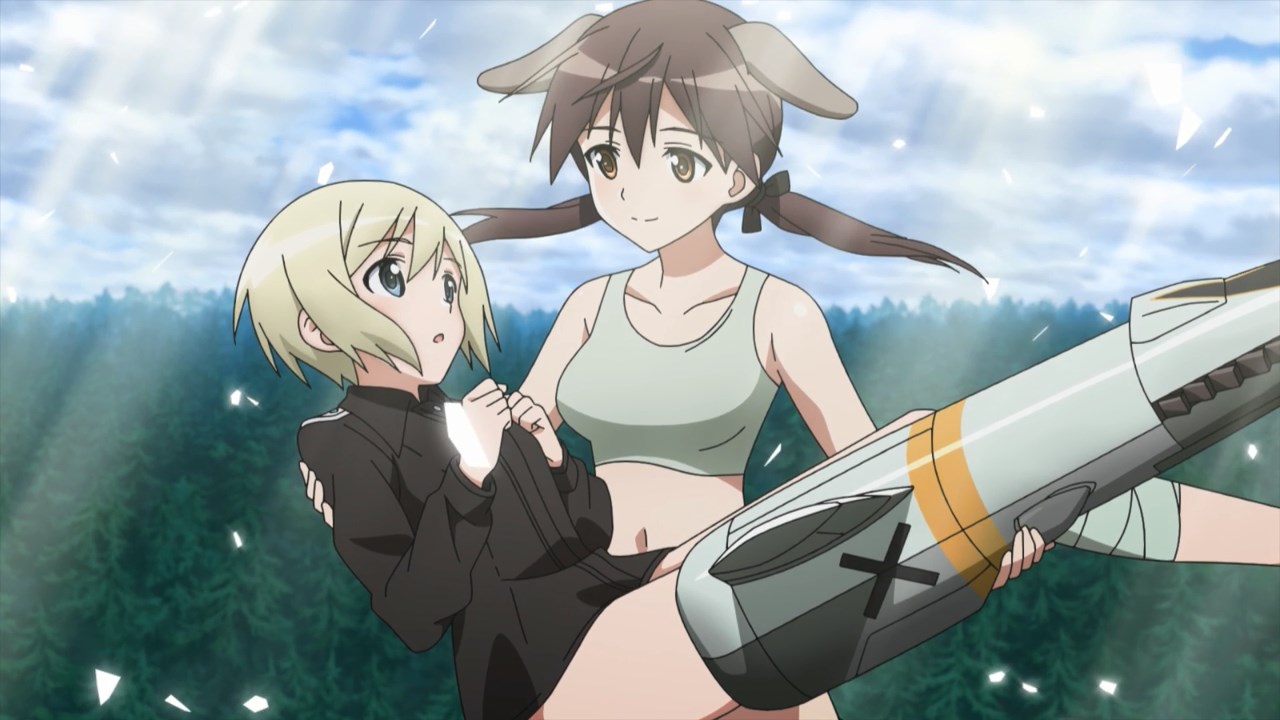 Next time will probably be what we expected in Episode 3, a vintage ecchi Witches episode.

Yuri and Slice of Life are my anime passion.
View all posts by OG-Man →
This entry was posted in Episodic Anime posts and tagged 3rd Season, Episode 6, Road to Berlin, Season 3, Strike Witches. Bookmark the permalink.

8 Responses to Strike Witches 3: Road to Berlin Episode 6: A Barkhorn to Pick With You