This show’s English title is accurate. It is certainly scorching. What do I mean? Find out as we take a look at Scorching Ping Pong Girls.

Plot Summary: Ever since their champion was defeated, the world of girls’ junior high ping pong has been in turmoil. Koyori is the new smirking transfer student at her junior high and she’s ready to shake up girls’ ping pong. 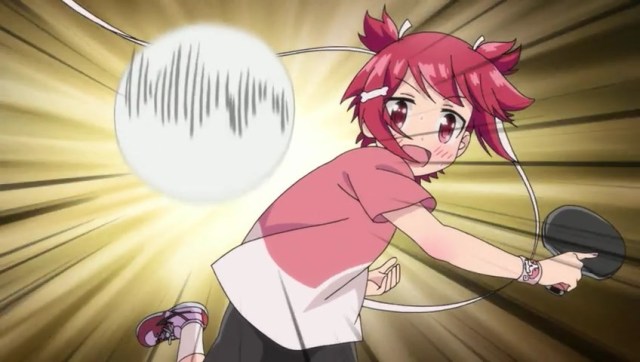 To explain the show’s premise as simple as possible, think Saki but with ping pong (Ping Pong Saki or Saki: Ping Pong Edition). Instead of superpowered lesbian mahjong wresting we have superpowered lesbian ping pong boxing. Even the setup is similar with the girls aiming for the National ping pong tournament while having character developing flashbacks and snuggling and flirting with each other as often as possible. More on that later. That is where the similarities end since ping pong is (obviously) a differennt sport than mahjong. This works in SPPG’s favor as the matches are more fast paced and a lot more can be shown in one episode. See, unlike the Saki series that takes its time mapping out each move, SPPG’s matches are presented like highlight reels, jumping to important moments of matches rather than showing each and every serve. While Saki also skips plays SPPG skips more of them, making matches flow quicker. This may seem like the matches are rushed. Not so. As I already mentioned the matches are like highlight reels, meaning the most important serves are shown. Basically matches do not feel rushed at all and are instead high octane back and forth adrenaline rushes complete with lots of sweating and joygasms.

Ah yes, the excessive sweating and joygasms. The first one is self-explanatory. Ping pong, especially here, is a physically demanding sport and the competitors sweating after long sets is to be expected. The joygasms on the other hand…let me put it this way. Some of these girls, especially our leading lady Koyori, love playing tennis. No…I mean, REALLY LOVE PLAYING TENNIS. Depending on what kind of person the viewer is this can either be disturbing or GLORIOUS! Some of the dailogue during matches can be quite ecstatic to say the least. I do not need to tell readers which side I am on as it is not hard to figure out.

As far as the players go they are split between the seniors, the girls who get the most spotlight and have the more intense matches, and the juniors who are fun to watch working hard to be as good as their seniors. The juniors are not background characters either. Some of them get nearly as much time in the spotlight as the seniors and do more than spectate or job out to the seniors. If I had not made this clear before I enjoy when shows/movies with large casts do their best to make as many of its characters feel relevant and not part of the background. 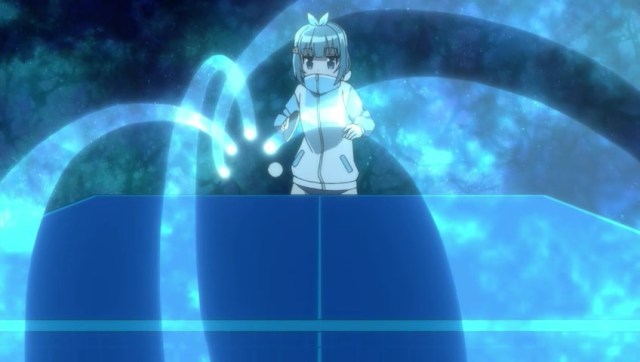 Bculating the best ack to the matches, each girl has their own play style, skills and superpowers so it is pretty cool seeing them plan their next move before each serve, or for some on the fly. Of course a “themed” show like this one is not complete without teaching viewers some tidbits about ping pong; for example paddle maintenance, strategies, conditioning, positioning during matches, etc.

The animation quality is good for what it is. I cannot call it ugly as it is clearly doing its own thing as far as Girls Club shows go. The soundtrack is as high octane as the matches which is obviously a good thing. It is cute and heart pumping.

As mentioned above when the girls are not focusing on ping pong or character developing flashbacks they spend most of their time snuggling or flirting with each other. There are many yuri pairings on the show between familiar yet welcome archetypes such as the shy girl X tsundere combo of Koyori and Agari to the smooth X boobies combo of Captain Kiruka-senpai and Munemune-senpai to name a few. Plenty of yuri fun to be had here.

Overall Scorching Ping Pong Girls is a really fun sports themed Girls Club show akin to Saki but has more than enough variety besides being a different sport to stand on its own. It has a large variety of characters who all contribute something to the show, the ping pong matches are heart pumping, the in-match dialogue ranges from serious to joygasmic to seriously joygasmic and the ships are super strong. Highly recommended to Girls Club and sports yuri fans. Would love it if this show were to get a second season one day.