This show reminded me why I still enjoy watching professional wrestling since becoming a fan 20 years ago. This is “I Wanna be the Strongest in the World!” or Sekatsuyo.

This will be a 2-part review with one talking about the show and a later post discussing why this show made me reflect on some things wrestling related.

Plot Summary: Hagiwara Sakura and Miyazawa Erena are the leading members of a popular idol group Sweet. One day, Erena is injured by the attack of a female pro-wrestler Kazama Rio during the recording of a TV program. Sakura gets mad at Rio and gives her a dropkick. To avenge Erena, Sakura enters the female pro-wrestling matches.

First of all, let me get the basic stuff out of the way. This is a show with a high degree of fanservice. There are plenty of close-ups of the breasts and crotch shots, there are some shower and locker room dressing scenes and Ryona fetish pleasing submission holds. In fact, 50% of all the matches are submission holds. It was not easy, especially during the first half of the show (There were several cringe worthy moments for me before reaching episode 5) but after getting used to this match structure, it was smooth sailing from there. 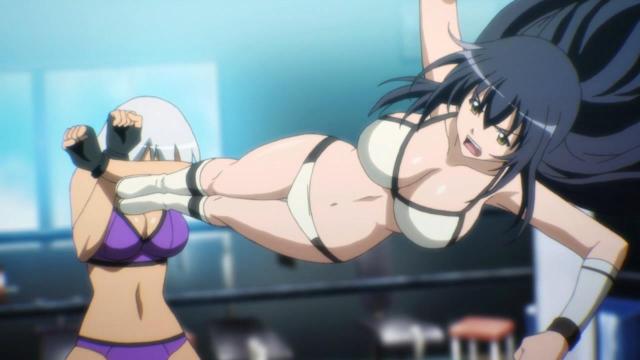 The animation quality’s passable at best. The girls are hot, yes, but it can sometimes be difficult to see what’s going on. I, being a wrestling fan for a very long time, played a game while watching the show. I wanted to see how many of the moves I could recognize. However, sometimes the camera was too close for me to get a good enough glimpse of the wrestling moves. Thankfully it didn’t happen often and I got a lot of the moves right.

The music is fine, although there is one background music that felt really off to me. The people who saw the show can tell which one it is. I look forward to the OST because I REALLY like Sakura’s entrance music. It’s super upbeat and fits her character perfectly. The other entrances are good too but Sakura’s is the best. 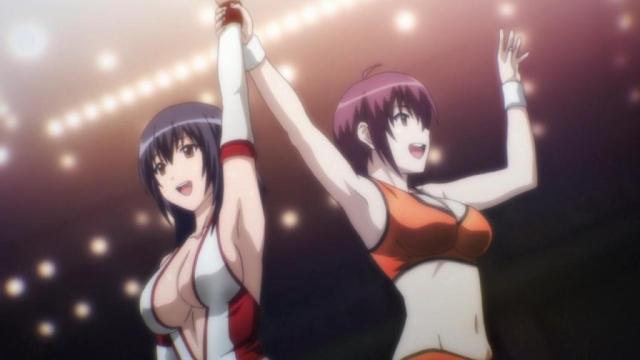 With all that basic stuff out of the way let me explain why I liked this show so much. The storytelling, chracter interaction and in-ring psychology were SUPERB! Watching this anime reminded me of how I feel about Queen’s Blade. Behind all the boobies and excessive fanservice lies a story about women fighting to become the best of the best and dealing with their own personal obstacles. This anime felt very similar. The characters who got a lot of screen time were all likable, especially Sakura herself. I REALLY like Sakura. If I were to compare her to a real life wrestler, I’d say she has the stamina and charisma of John Cena (Before he got stale) and the tenacity and athleticism of Daniel Bryan.

In-ring psychology: The thing about pro-wrestling is that the wrestling itself is only PART of what makes the sport/manly soap opera awesome. Storytelling also plays just as important of a part. Wrestling storylines do not have to be deep, cryptic or life changing, just interesting. If the audience does not care about the  in-ring combatants then it does not matter what the wrestlers do in the ring or how skilled they are. It is both the scriptwriters and wrestlers’ jobs to get the crowd not only to care enough to pay to see the wrestlers fight but also give the crowd their money’s worth during the match itself. THAT is what I personally think this anime did phenomenally. The wrestlers had good reasons to want to fight each other, the crowd was also interested and many emotions were expressed during the matches both from the crowd and the wrestlers. THAT’S why I love pro wrestling. In real life, wrestling is about suspending a viewer’s disbelief in favor of watching two combatants perform feats of awesomeness that one would not get to see in other martial arts like boxing, karate or MMA. In this show, the wrestling is real and that increases its awesomeness. The wrestling used on the show, imo, could satisfy both fans of mainstream wrestling and those who prefer the flip-dee-flips, loop-dee-loops, spot monkey antics of independent wrestling. The match types were strictly 1 on 1 with 1 title match and 2 stipulation matches. No Extreme Rules or other gimmick matches though. I can say the heels, despite playing no important role in the main plot, acted like any “evil” wrestlers would so that’s good.

Back to why Sakura’s awesome. Her path to becoming a pro was most believable. Despite my gripes with the first half of the show (Which I’ll explain in detail in the second part of the review), Sakura’s growth as a performer was very well done. There’s something about Sakura, besides her obvious sexiness that always made me want to cheer her on. She’s just so damn cool to watch! I can see why top wrestlers see great potential in her. I would even consider creating her in WWE13, even though I don’t know if they have one of her two signature moves in the moves list. Her second signature move is easy to find though.

Overall, this anime had some of the BEST women’s wrestling I had ever seen in a VERY long time. Who would I recommend this show to? I do not know. I don’t know many Western wrestling fans who could ignore the excessive fanservice and appreciate the show’s mesh of mainstream and independent pro-wrestling styles. I don’t know many Japanese Wrestling fans. I don’t know many women with high tolerance nor do I know any female wrestling fans. I guess the people I could recommend this to are the curious ones. The show is far from a masterpiece, with its average animation style, rough first half, excessive fanservice and decent music but if one were to get passed the fanservice, see it only as a marketing gimmick and view the characters and match quality, one will find something special. I know it won’t be easy though.

Here’s part 2, where I go into all the main event matches on the show and explain in detail why they’re all so good.

Yuri and Slice of Life are my anime passion.
View all posts by OG-Man →
This entry was posted in G-Views and tagged fanservice, female pro wrestling, I Wanna be the Strongest in the World!, Sakura Hagiwara, Sekai de Ichiban Tsuyoku Naritai, Sekatsuyo, sport, tournament, Wrestling. Bookmark the permalink.