To start off I did not expect this anime, a “girls with guns” show, to become as popular as it did. Several reasons were given. The main duo’s design are excellent (which they are). The protagonist has the right kind of appeal for mainstream Japanese animeniacs or the studio that produced it marketed it very well. Whatever the case it became one of the top anime of Summer 2022. I imagine peeps dropped by here because they wanted to hear my thoughts on it and if it lived up to the surprise hype. Let us find out as we take a look at Lycoris Recoil.

Plot Summary: These are peaceful days, thanks to a secret crime-fighting organization of all-girl agents: Lycoris. The elite free-spirited Chisato is their all-time strongest agent, alongside the cool headed talented-but-mysterious Takina. Working together at the Lycoris Recoil café, they serve coffee and sweets as well as childcare, shopping, and teaching Japanese. The chaotic everyday lives of this mismatched duo begin. 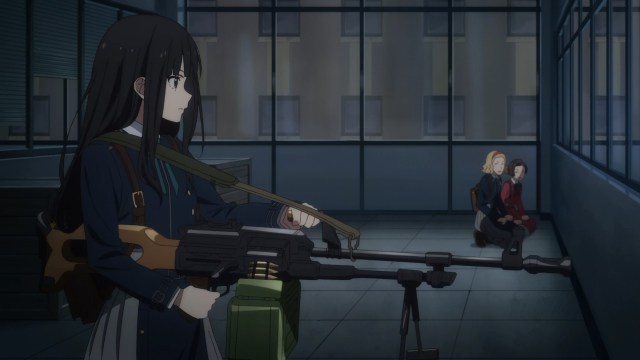 As mentioned in the introduction and plot summary the show is about cute and sexy girls fighting crime with guns and cool martial arts, in secret. That secrecy plays a role in the setting of a “peaceful” Japan free of crime and terror, which it actually is not as enemies as low as thieves from all the way to terrorists and secret organizations take issue with the current state of the country for one reason or another. The story shows how both heroines and their friends handle things with their own worldviews and often clash on the right and wrong way to handle things, specifically dishing out justice. The story and topics are not things we have not seen before in fictional media but even so are well presented and interesting to see the heroes and villains’ stances. Besides debates on order, peace and justice a couple more topics that play important roles are the value of life, finding one’s purpose in the world and most importantly around these parts, love.

Besides the themes and debates of the show the action scenes are excellent too. Every action scene be it our heroines taking down groups of thugs or formidable foes are well animated and get quite brutal as the story progresses despite one of the main girls valuing life. More on this later. Every time the hero team go into action expect awesomeness on the battlefield and the command post. 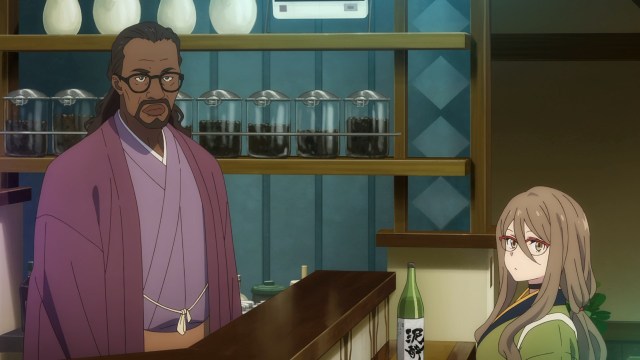 As alluded to in the action scene the main duo are accompanied by their equally great homies. First is Master Mika the wise kind of mentor figure with a very interesting secret or two. Mizuki the strudel hungry navigator who gets in on the action from time to time but mostly pines for sausages and complains about adult life when not bantering with her unofficial buddy in crime. Lastly is said buddy Kurumi who is either a child genius or a shortie. Her introduction and mannerisms are wonderful, especially her love of Enka music..Basically the main cast and their banter are all excellent.

The side-characters, friend and foe, play their roles well with my favorite being Fuki. She is the classic grumpy sweetheart archetype. Basically do not hate her after her understandably uncool first impression. Her partner’s kinda “meh” but has her moments too. As for the villains…Let me put it this way. As the story progressed and both sides’ actions and motives became clearer I began comparing key characters on both sides to DC Comics superheroes and villains. Basically that is a good thing coming from me as I love the DC crew and characters reminding me of them are wonderful.

With the action, interesting themes and brief character descriptions done let us cover my highlights on the show. First is the lighthearted stuff. Yes the action is great but what drew me in to the show were the lighthearted segments throughout, which fortunately there were plenty of for most of the story. Even during the more intense developments near the end the show snuck in some delightful scenes that did not feel out of place but were in fact much appreciated. It is a great balance of joy and seriousness with the joy filling my heart with joy. As always comedy is subjective but the execution of the jokes and punchlines are top notch. Team LycoReco never failed to put smiles on my face throughout the show.

Best to show the funniest outfit and have readers anticipating the cuter and sexier ones on the show.

The best way to go over the presentation is hinting our heroines, mainly Chisato’s, many, many outfits she wears throughout the show. In almost every episode she wears something different. Sometimes she has a different hairstyle. Takina does not change clothes as much but she does not fall behind in looking stylish. It helps our heroines are as adorable as they are sexy adding bonus style points to the counter. Everything else is very well animated too from important expressions to key moments that might be easy to miss the first viewing. The attention to detail is quite nice. The soundtrack is good too with a nice OP and especially ED. 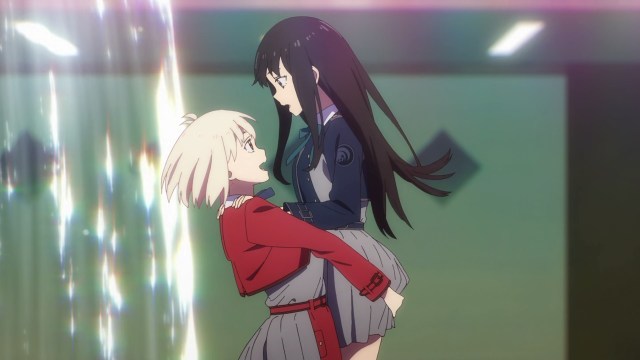 At long last it is time for the main event and main reason to watch the show. Are ChisaTaki excellent? Knowing what TV shows can or cannot get away with over the years depending on circumstances beyond viewers’ control, even ones who looked up the hoops some shows have to jump to work yuri magic, I would say yes. While ChisaTaki are a classic “Genki X Ice Princess” couple I dare say this is one of the best “defrosting” I have seen in my over two decades of consuming yuri media. What I mean by this is Takina going from the by the books super serious warrior to an almost “Chisato Lite” is fascinating. Usually when ice princesses defrost they merely become more chill and happier around their energetic love interests. With Takina however, without saying too much she has shall we say “zippy-dee-doo-die-way” moments too. Plus one has to respect a girl who will go the extra mile when she has her mind set on something. Keep this in mind while watching. Not to be outdone Chisato is a very interesting genki in her own right. She is cheerful and full of life but be careful not to push her buttons or really cross her. There is a reason she is dubbed the “Ultimate Lycoris”. Besides that she is pretty sassy, flirtatious (especially with Takina) and playful. She is also one of those peeps who hide their weaknesses. Nothing new of course but Chisato is one of those characters who becomes very vulnerable when weakened. Think of her as a mix of Vash the Stampede and Kenshin Himura. That is all I will say. Something else I found interesting without giving too much away is the difference in approach between ChisaTaki, specifically one who values all life except for one and the other who starts with a “life of the few for the many/most important” to a “life of the few for the many/most important but with less head shots”. It is an interesting dynamic. Also be sure to pay close attention to the multiple hints from start to finish, including where the epilogue takes place. Everything has a reason. IN SHORT…

Chisato falls for Takina at first sight and Takina falls for Chisato HARD. Keep this in mind while watching.

Overall Lycoris Recoil is arguably deserving of being one of the best anime of Summer 2022, if not the entire year. The main cast are excellent and the side-cast play their roles well. The presentation is great. the action scenes excellent too and the lighthearted moments FANTASTIC. Lastly ChisaTaki’s relationship development is great. Will we get more from this world? We do not know yet but what we got here was quite lovely indeed. Highly recommended to fans of fun and serious Yuri Girls with Guns shows such as El Cazador de la Bruja and Princess Principal.

Yuri and Slice of Life are my anime passion.
View all posts by OG-Man →
This entry was posted in G-Views and tagged action, comedy, girls with guns, Lycoris Recoil, science fiction, Yuri. Bookmark the permalink.