We last left our heroines with a shocking announcement. Let’s see how they handled things.

Naturally everyone was sad to hear Mami was leaving next semester. There was still time before then so they agreed to make one last special memory together by playing a match.

We joined Riko and Naomi on a parfait date. Riko wanted to play hockey again. Naomi asked her about what she said last episode, that she first quit hockey after Naomi took up ice skating. Riko was like “Yup. If you play hockey I will too. If you decide to stop again so will I. I want to play with you”. Best pair so far. Later they agreed with the plan to play a match. 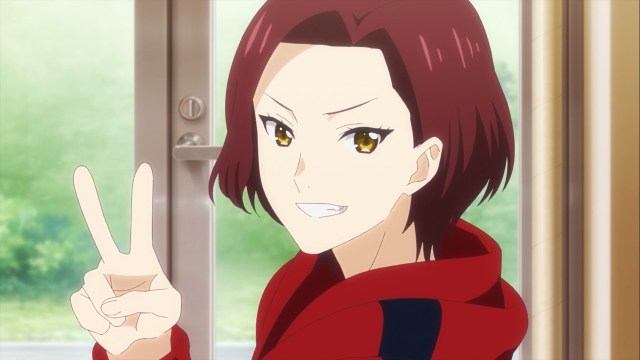 Coach Yoko tried to act all serious when the girls told her about their plan but couldn’t hold back her glee as her own master plan was going smoothly. She guaranteed they’d be ready to play their first game in 2 1/2 months time.

Here were the assigned positions:

Later at Grandma’s Inn everyone, including Naomi and Riko, were invited to spend the night. Naomi made a huge discovery. Grandma was a big fan of classic manga by Suzuko Higashio. Dunno if the author is based on a real person but Naomi passionately discussing them with Grandma was wonderful. Meanwhile Coach Yoko and Mascot Guy took the girls’ devotion seriously thus they wanted to look up an experienced team to give them a memorable first game. After a training montage Coach announced the date of their match was set.

To commemorate their debut match Mami sewed a special banner. They’re more amped up than before.

Finally the day of their exhibition had come. As we can see the more experienced team had half as many teammates than our heroines. Manaka hoped Riko’s experience and Kaoruko’s steadfastness would be enough to give them a fighting chance.

This screen shot shows how well our heroines fared in the first two quarters.

Coach Yoko knew the girls were nervous and motivated them to remember their training and do better in the 2nd half. While Manaka did her best to lead the team the one who felt the most pressure was Mami. This was primarily for her after all. Plus Manaka and Naomi were childhood homies just like Naomi and Riko. Their bond was enough to get that much needed moral victory goal. The Pros won at 9-1 but the real victory went to the Dream Monkeys.

Them being homies 4 life of course Mami and Manaka had a heartfelt goodbye. Pretty sure they’ll see each other again soon.

Next time ice princess Yu makes life a pain for Manaka as is tradition.

Yuri and Slice of Life are my anime passion.
View all posts by OG-Man →
This entry was posted in Episodic Anime posts and tagged Episode 3, Pride of Orange. Bookmark the permalink.