With the drama put on hold for the time being and our 5 heroines finally united it’s time for the next important chapter in their journey, their group name!

It was another day in class when Keke read a very important announcement on her phone. The Love Live! tournament was coming up and the applications were open. Ren heard about how the schools of participating groups became so famous for competing it helped them get more students applying. Ren had that to strive for.

Sumire meanwhile was more hyped for the fame and adulation that came with performing on a big stage like Jinguu Stadium. Kanon and Chisato’s reactions were more grounded.

Speaking of Kanon and Chisato they’re more surprised to see Ren wearing a General Course uniform. She explained that the Headmistress allowed students to wear whichever uniform they wished from now on. Kanon liked that. Keke was like “FOCUS LADIES!”. The next challenge came when she’s about to apply the group but noticed something very important they were missing, a group name.

Keke’s like “KeKa worked before so now that we’re five let’s go with ‘ChiKeReKaSu!”. Chisato suggested “Maru-Maru Circle” because of how multidimensional circles were. Sumire’s sadly denied an opportunity. Ren meanwhile hid her true power from the gang as shown here. Would have been cool with one of these too in all honesty though the last one would need a 2nd season. 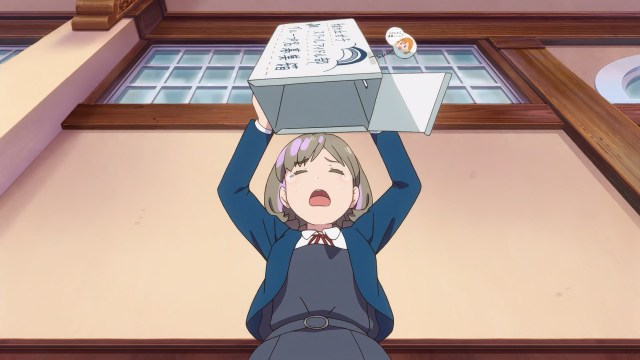 Keke sought help from school idol goddesses but it seemingly failed. More on that later.

Kanon asked Sunny Passion for tips. They said it’s their fans who helped come up with their group name but something else they mentioned got Kanon’s attention, live streaming. She held a Zoom call to discuss promoting the group. Notice Ren using voice chat. There’s a reason. 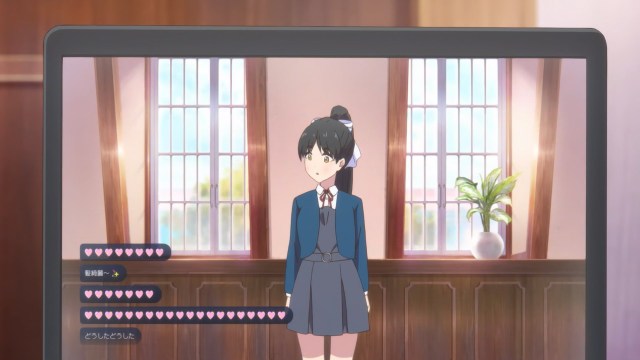 Like Rei Togetsu she ain’t “hip”, though in Ren’s case she’s advised to not bother. Let’s just say she won’t become a streamer anytime soon. For some reason her silently watching chat before realizing they’re talking about her had me laughing for minutes. Loop worthy moment.

With the streaming deemed a failure Kanon and Ren realized anther important thing missing, neither started working on the lyrics and melody yet. They hoped one would start so the other could take over. Ultimately the gang pushed Kanon to basically do both. Unable to come up with anything Keke was left with no choice but to use a “traditional Japanese method”. As shown in the screen grab that didn’t work either. Next was everyone watching Kanon which again failed. The next day Kanon talked with her classmates about the unfair pressure when they mentioned coming up with names to throw in the box earlier but couldn’t come up with any because they didn’t know what the group’s identity was yet. They’re like a blank canvas. The gang admitted this was true but something their classmates said sparked something in Kanon. She told the gang to give her some time.

After another montage Kanon finally unveiled the Liella name, which is based on the French term for “to connect”. In our heroines’ case use the power of school idols to connect everyone with the colors of the rainbow. Everyone loved it and we got a cool Kanon song too.

Great stuff as always. Next time a rap video?

PS: All this time I thought it was pronounced “Lie-luh” when it’s actually “Lee-elle-uh”.

Yuri and Slice of Life are my anime passion.
View all posts by OG-Man →
This entry was posted in Episodic Anime posts and tagged Episode 8, Love Live! Superstar!!. Bookmark the permalink.