When we last left our heroines they barely recovered from the shocking revelations about Darth Shino when they were attacked from behind.

Before Uta “deleted” Memory Kano she wanted to peek inside her to discover why her boss wanted her memories erased so badly. Like she said it’s Darth Shino’s unspeakable suffering that drew her to the Red Ring Gang. Too bad for her Niina wasn’t having any of it. She initially looked down on her but Niina showed she got her groove back and zapped her. Normally she’d enjoy that but to her surprise there was no anger or resentment in her attack. Niina was like “Oh. Guess it’s because I have nothing against you anymore. I just want to whoop your ass in hopes of better understanding you.” Uta was like “Are you for real? The same girl who ravaged so many girls’ Fragments suddenly pities me?! Screw that! Give me the good stuff! Hit with a large dose of rage, resentment, sadness, fury, disdain and-”

Thus Niina’s face turn was complete. This gave Hiori hope of saving Darth Shino, as long as they had “Kano”, knock on wood.

Before the gang prepared to head for the final battle, JRPG style (fitting as this show is based on one), Miyako chimed in regretting she wasn’t a Reflector to help them out. Ruka was all cool and stuff “You’re a great manager. We couldn’t have made it this far without you”. Miyako signed off with a “I’ll be sure that ditz doesn’t cause more trouble. Just complete the mission and come back safe, kay?”

With their combined feelings in sync our heroines opened a path to the Common. They’re shocked to find it in ruins along with powerless barely visible Yuzu and Lime. The Common was warped into Darth Shino’s current state of mind.

The Sith Lord launched the negative emotions at our heroines to form a Sephirot (I think). Fortunately Momo and Mio showed the gang their badass power couple energy.

Niina had an epiphany at this awesome sight but couldn’t think about it for long as she’s critically wounded. The gang were saddened but thought that as long as they stopped Shino and restored the Common they could save her and every other girl whose Fragment got taken away. 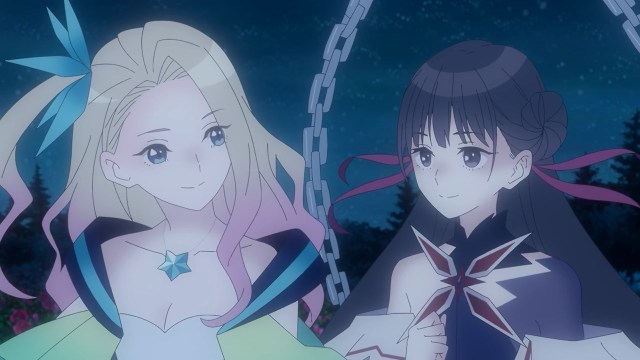 Everyone got dragged down to what I assume was Shino’s personal Hell on Earth, which was of course molded after Saint Ives Academy, specifically the Red Ring Church. She laid a trap for Momo and Mio temporarily separating them from the others. They were confronted by an “old friend”. Mio was ready to fight it with Momo but she’s like “You gotta go help the others. Don’t worry. I’ll come back to you. If not then wake me up again later”. Mio believed that wouldn’t be necessary this time.

Back with the others they made their way past the nega-spirit girls to Shino’s room, only to be warped to Crisis City. Actually it was a fiery recreation of her grave. She wanted them to go down the same way if they wanted to see her.

Darth Shino had another surprise for them. Amiru, who claimed to be her Fragment given physical form like “Kano”. Ruka warned Ryoka that Admiral Ackbar was nearby but she’s like “Screw Ackbar. Doesn’t matter if the Amiru in front of me is a trap. I won’t run away anymore. I want her taco”.

Shino resumed sinking the building they were on when “Mio” came to the rescue. Ruka strangely stood back. It was because “Mio” sounded a bit selfish in her rescue. Hiori could tell she was a fake with Ruka confirming it.

Hiori and Ruka suddenly figured it out. Wanting to show off their own power couple energy they took the plunge with “Kano”. It worked as they, along with the real Mio, finally confronted the Sith Lord. This felt like a Kingdom Hearts and Tales game final dungeon wrapped in one and it rocked.

Next time is the G-View.

Yuri and Slice of Life are my anime passion.
View all posts by OG-Man →
This entry was posted in Episodic Anime posts and tagged Blue Reflection, BLUE REFLECTION RAY, Episode 23. Bookmark the permalink.