It was fun seeing the OG gang kicking ass again but now it’s time to get back to business.

Yachiyo’s quest to find her missing wife and get her family back from the Magius.

We continued where we left off last season with Iroha missing and Yachiyo lonely without her. The longer she was without her wife, the closer she was to being consumed by darkness, allowing Doppel Yachiyo to take over.

She interrogated Wings of Magius lackeys, looked up Rumors and took down Uwasa in hopes of finding a lead to Magius HQ but no luck. As she continued her search she was about to drink from her mug but remembered how Iroha “lied” to her. Her babies weren’t there either so the poor dear’s heart ached.

Speaking of her babies we learned that despite some doubts they joined the Magius of their own accord. We also got some backstage Loli Dictator intimidation. 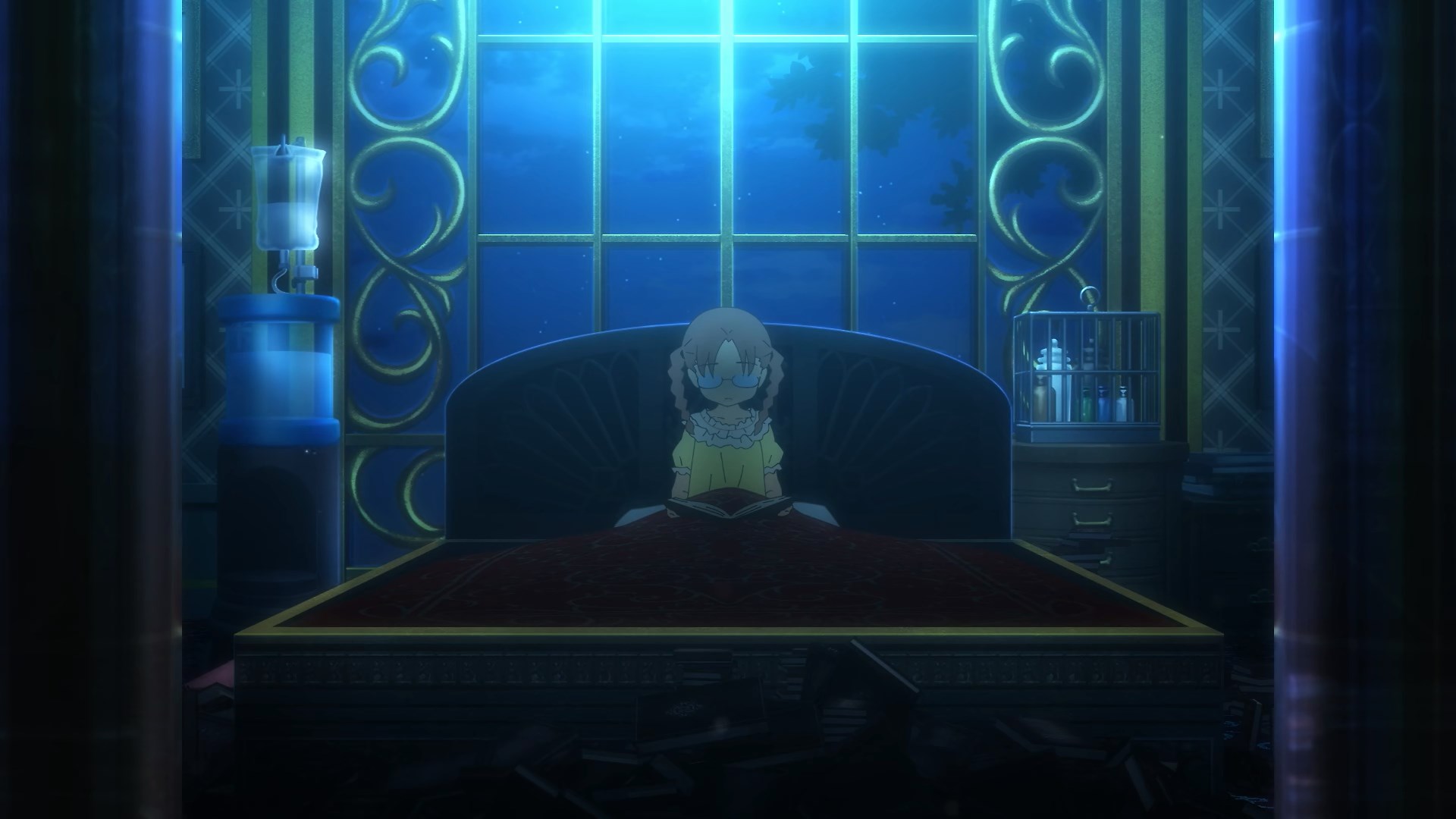 I mentioned to some peeps in the last episode that before bringing her up I’d totally forgotten about Kuroe. Here she was, called to another one of the Magius’ chamber, Nemu Hiiragi. Could Ui be a Magius too? So Nemu revealed herself as the creator of the Kamihama Rumors to Kuroe though she used too much power and became bedridden, possibly close to death. She had a secret mission for her, find the Rumor of the Eternal Sakura and protect a certain girl. During her search as she regretted accepting the mission Mini-Kyubey popped up. She followed it.

Mitama returned to her pad after an unknown “business trip”. Yachiyo waited for her, ready to interrogate a possible Magius member. Mitama explained that what she did was purify Magical Girls so Doppels wouldn’t appear. Doppels were a phenomenon only found in Kamihama Magical Girls. Think of them as one’s dark emotions taking over. Though they sacrifice conscious control of their bodies Magical Girls get a massive power boost and purify their Soul Gem afterward. Naturally relying on this “Super” Mode too much is a really bad idea but Magius plans to use Doppel power to their advantage. Mitama then claimed she’s neutral.

Yachiyo asked her to help find Magius HQ, pleading her case full of regret. Regretting her decision to continue living life regularly after losing Iroha. That decision hurt her even more. She wanted vengeance against Magius. 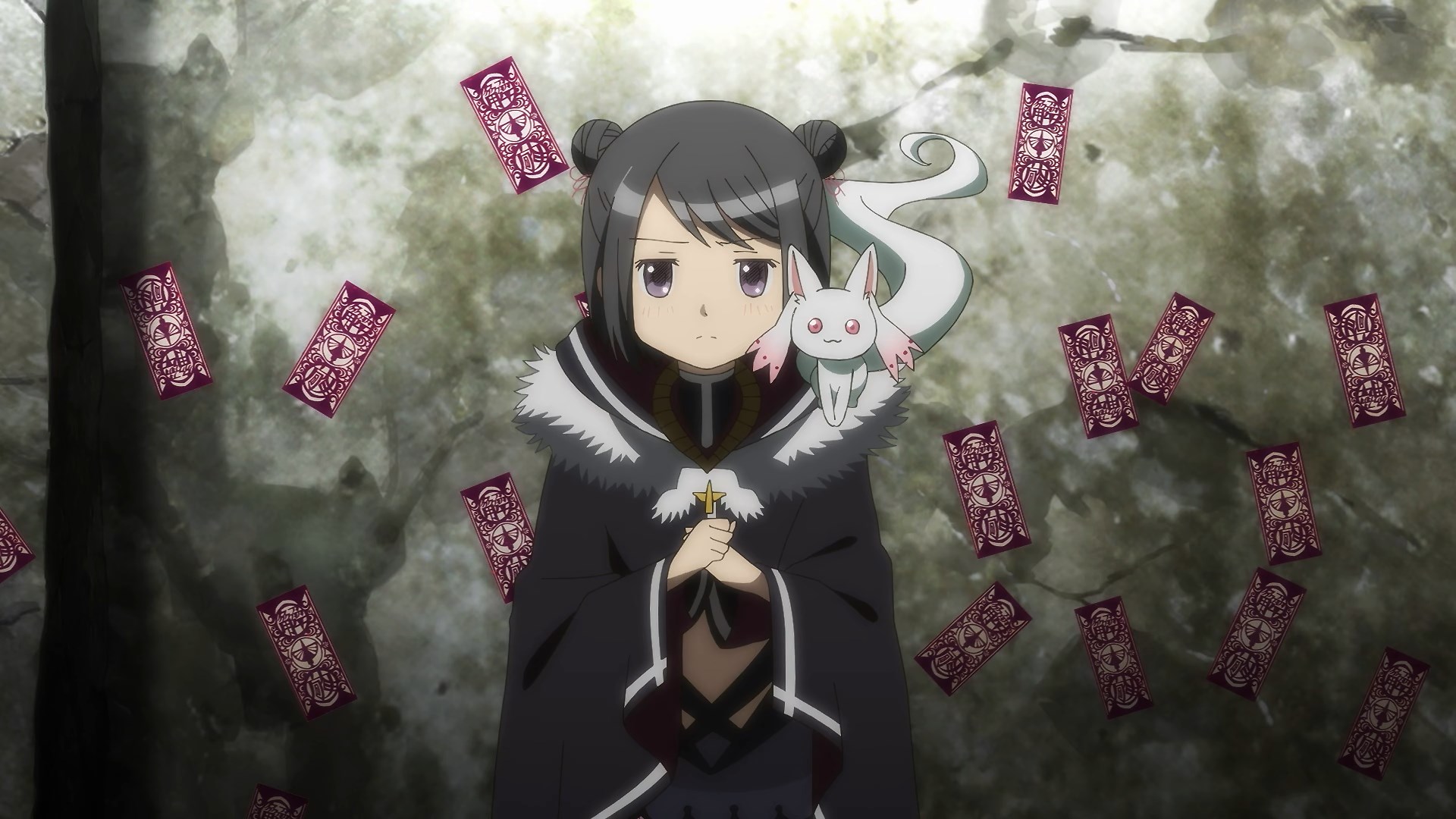 Her search took her to the same area Kuroe was at. Yachiyo recognized Kuroe from the premiere episode but lost her cool when she saw her wearing a Magius necklace. She was about to pull a bad cop on her when Mifuyu showed up. 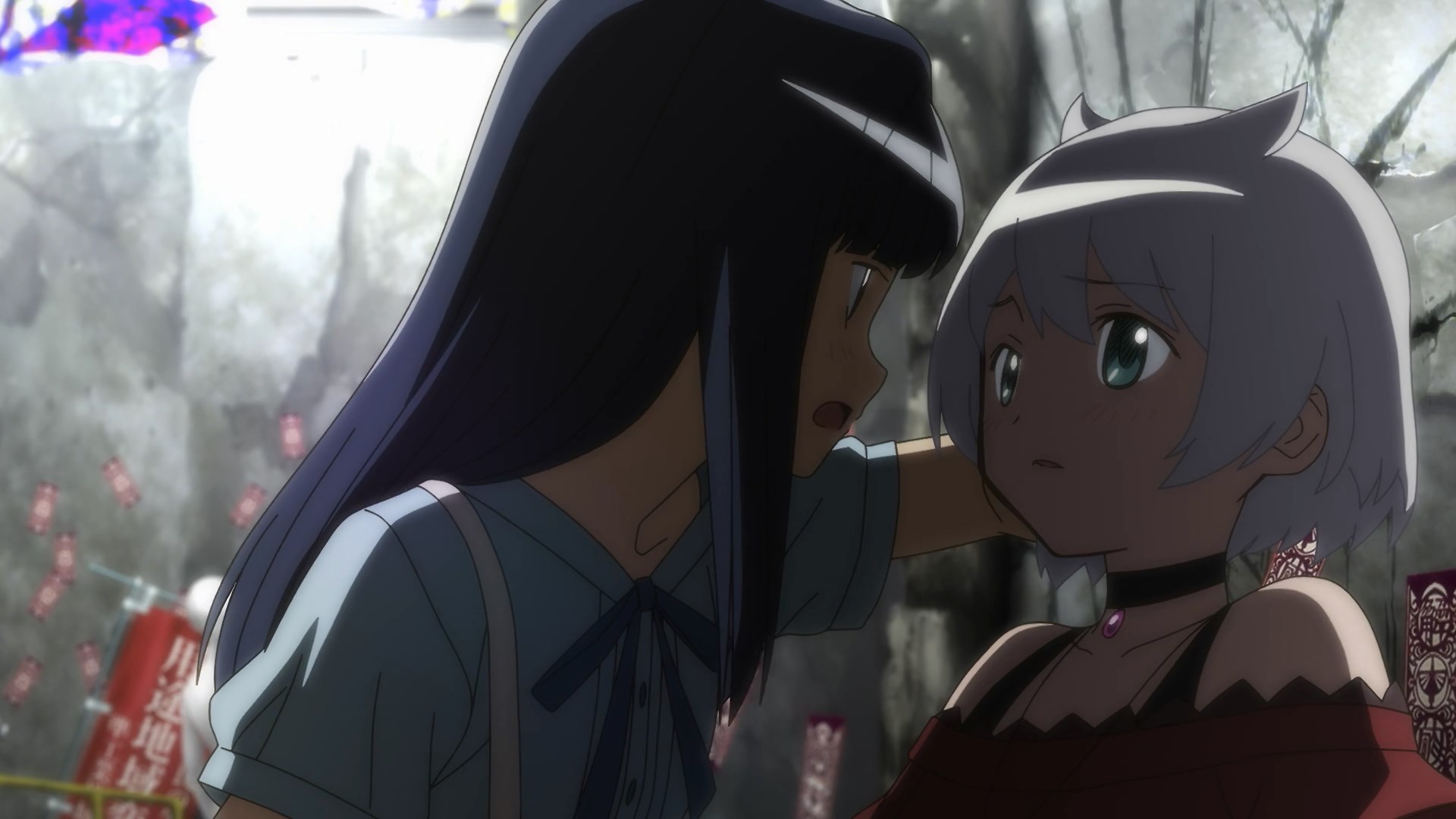 Mifuyu tried reasoning with her but Yachiyo wasn’t having it. She said the Magius’ plan would prevent weaker Magical Girls like Iroha and herself from dying. She must have known that would trigger Yachiyo.

The more she pleaded with Yachiyo to understand the Wings of Magius’ resolve the angrier it made her, especially by comparing herself to Iroha. So pissed was she she unleashed some kind of in between super form. Not quite Doppel but not a typical Super form either. As the battle got more intense she went full Doppel and took down Mifuyu but before she could finish her used her willpower to break the Doppel’s grip over her, refusing to sacrifice Mifuyu. Yachiyo hoped Mifuyu would join her but alas. As Kuroe was about to warp away with her Mini-Kyubey had other plans. With Mifuyu gone all Kuroe could do was follow MK.

MK led the two to another Uwasa barrier. Inside was the Eternal Sakura Rumor and at the center…Yachiyo had found the one she so desperately sought but freeing her wouldn’t be an easy task.

Hyped for next time!

Yuri and Slice of Life are my anime passion.
View all posts by OG-Man →
This entry was posted in Episodic Anime posts and tagged Episode 15, Magia Record, Puella Magi Madoka Magica. Bookmark the permalink.