The long wait for Dragon Maid S2 is over. Let’s see what more the series has in store for us.

Before we begin I want to make something clear. All I ask from visitors new and old, besides the obvious rule of being respectful in the comments, is to not include manga spoilers of any kind. It’s why I…

ALWAYS WRITE THAT RULE IN BOLD RED FOR NEWCOMERS!

Recently some visitors refused to listen, forcing me to be stricter from now on. In other words…

FROM NOW ON ALL COMMENTS WITH MANGA/LIGHT NOVEL/GAME AND OTHER SOURCE SPOILERS WILL BE DELETED.

For people who NEED to bring up the source, as always check out Rory’s coverage.

We joined our main dragon Tohru asking her beloved Miss Kobayashi if she’s the ultimate maid. Reason was she passed by a maid cafe one day and was like “How dare this establishment claim it hires maids greater than I!?”

Everyone took one look at her the head maid hired her immediately. Miss Kobayashi saw this as an opportunity for Tohru to experience first hand the pros and cons of the service industry, warning her of its treachery and seriousness.

To the surprise of no viewer Tohru adapted to the cafe with ease, becoming their sous chef. However, that wasn’t why she applied. 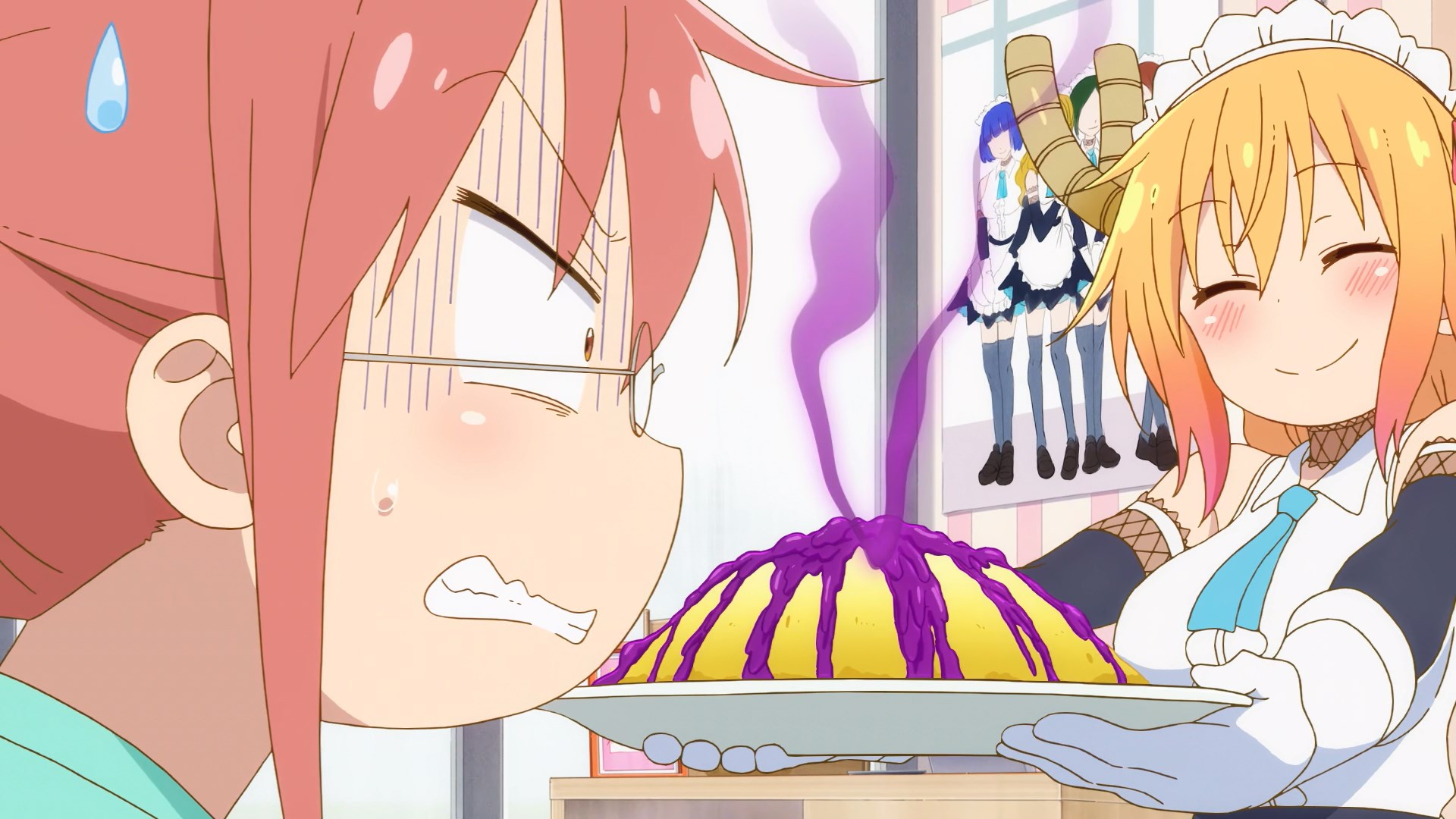 To sum up Tohru’s routine, she had the talent but not the charm, according to Miss Kobayashi. Everyone else didn’t mind as it made her even more popular. So much so when the staff begged her to stay she bestowed upon them her signature techniques. However, when she looked up reviews all of them only praised her cooking.

And now, the moment of truth. The debut of the dragon who will turn the internet into a bunch of namby pamby weenies. Just what did she do that made her such a controversial figure? Would we find out this episode? Let’s see.

We began with news reports of a certain mountain area being destroyed. Not just any area but Tohru and Miss Kobayashi’s special place. Tohru of course interrogated every dragon she knew. When she got to Elma the real culprit introduced herself.

This is Ilulu. She was disgusted that Tohru, a chaos dragon, wasn’t wreaking havoc on Earth but instead living merrily with humans, thus challenging her to battle. Elma, aware of how strong Ilulu was worried that if their battle wasn’t stopped their combined force would destroy the city and much more within their radius. Miss Kobayashi believed Tohru wouldn’t let that happen. Tohru tried reasoning with Ilulu but because all she knew was destruction wouldn’t listen.

Normally Tohru could handle Ilulu but protecting the city made it more difficult. Miss Kobayashi asked Elma to help but because of hers and the other dragons’ allegiances or in Kanna’s case, lack of power, they couldn’t unless Tohru was defeated. Growing more worried Miss Kobayashi went with Plan B, BRIBERY!

Back to the battle both sides grew irritated. Ilulu’s powerful attacks only getting “ouchies” and Tohru losing her patience from the rashes but forced to hold back to protect the city and woman she loved. Fortunately Miss Kobayashi struck a deal with Elma just in time.

As Ilulu was about to go all out Tohru zapped her with a critical strike, knocking her out before she could. She noticed one thing before going down, Miss Kobayashi’s influence. 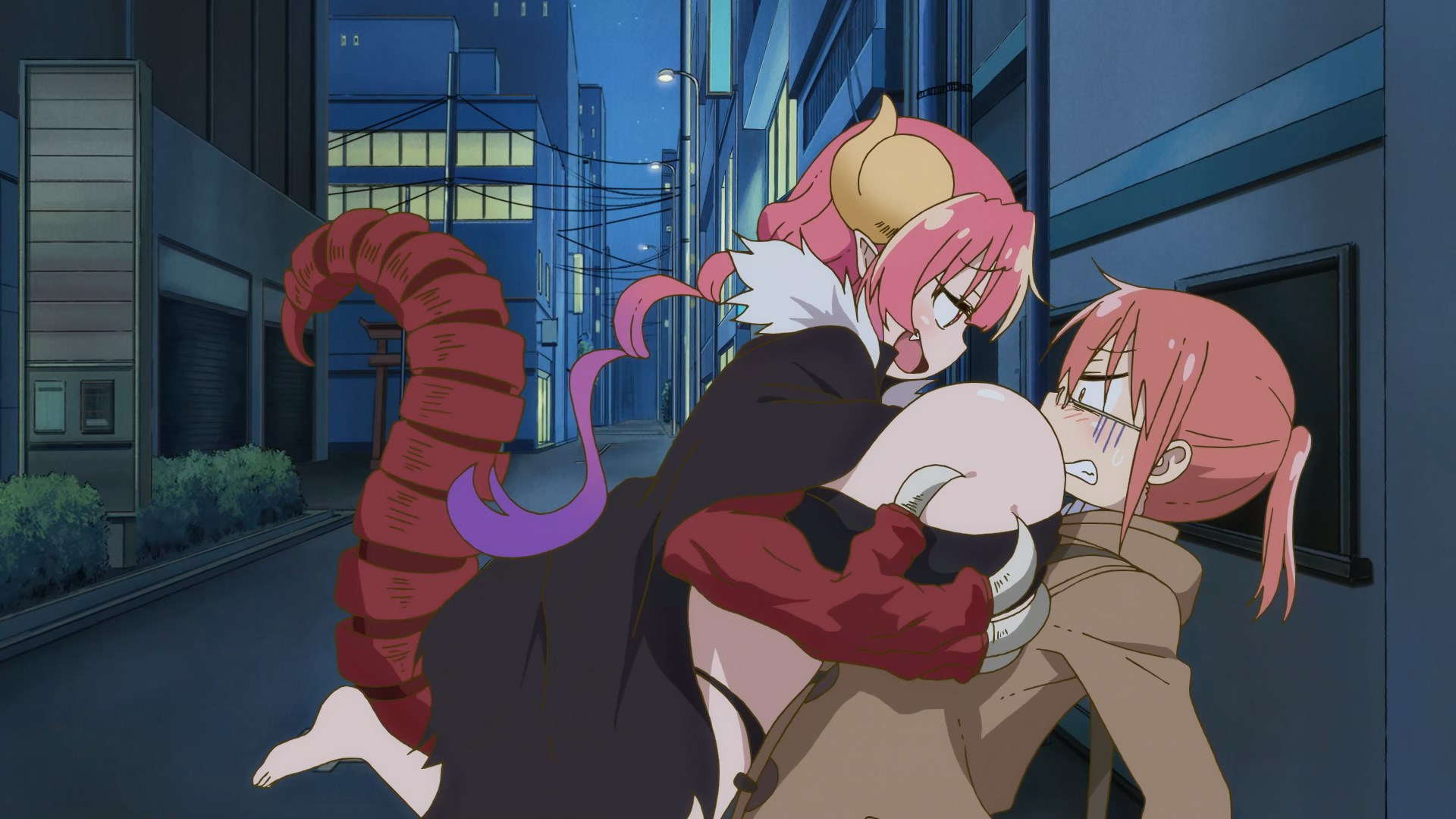 The next night Ilulu conveniently warped herself close to Miss Kobayashi’s route home. Based on how she answered her questions about Tohru Ilulu went for gold, unleashing her mighty injustice sacs of discord. Ilulu made two mistakes. 1: Comparing her human lust to that of a man’s. 2: Forgetting how anime girls/women felt about “sacs” mightier than theirs. The latter was her biggest error.

Ilulu refused to believe that humans and dragons could ever get along. Miss Kobayashi’s well worded response can be best summarized as, “Yeah. Tohru and I are different and we have our ups and downs but so long as we understand each other it’s all good. As for her feelings for me? I may not understand it but I accept them and her in my own way.” Her next question had some effect on the chaos dragon, “You weren’t born with those beliefs, were you?”. Her words almost got to her when she remembered a painful memory with humans. I guess to prove a point she used her magic to turn Miss Kobayashi into a man when she fell asleep. We’ll see where that goes next time.