The Dolls’ quest to rescue their Shadow Masters and pass the debut continued still.

Let’s quickly go over Lou and Ass’ part of the episode. As their search continued Ass grew increasingly irritated at how observant Lou was about everyone and everything, especially one important detail regarding the shadows. Heck, he’s jelly the other dolls weren’t as inane as he initially perceived.

Back to Lou. They spotted soot in the distance. Lou recognized the pattern. In the debut hall she noticed the shadow masters let out soot in different ways, even Ass’ master, who Ass himself didn’t pay attention to until she mentioned it. Louise’s soot had a wavy pattern. When it stopped Ass again tried to be the smart one but Lou called out to Louise. She knew what to do all along.

While Louise’s feelings for Lou still seemed vain I think she considered Lou a part of her. They have the perfect chemistry basically, as shown in Part 1 of this arc. We left the group with Ass considering sabotaging the pair.

In short, Lou X Louise is kinda narcissistic while Emilico X Kate are two beings with a growing bond as individuals coming together. Something like that. 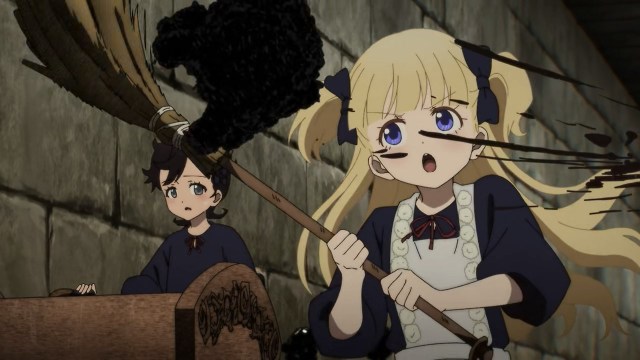 Speaking of Emilico, Rum and her found the location John showed them on the map. It was a mini-maze full of scorches. Emilico showed her resourcefulness coming prepared for battle while Rum did her best to keep up. There was a moment the duo appeared trapped because the maze layout on the map was different from the maze itself. Fortunately Rum remembered something John mentioned about a collapsed bridge and the two found the hidden exit.

Once out the duo noticed a hole in he grass wall. Emilico knew right away it came from Lou’s hedge clippers and was happy the team helped each other without knowing. As Emilico wished Rum luck in her search for Mistress Shirley Rum broke down revealing she wasn’t her face. Not only that but Rum wasn’t her real name. She was given that name by her imaginary friend Rummy. Basically Shirley hadn’t said a word to Rum since they paired up. My guess is either Shirley’s mute or even shyer than Rum. Rum was sad she didn’t know anything about Shirley nor could she read her emotions. Plus she only wanted to pass the debut for her own sake. 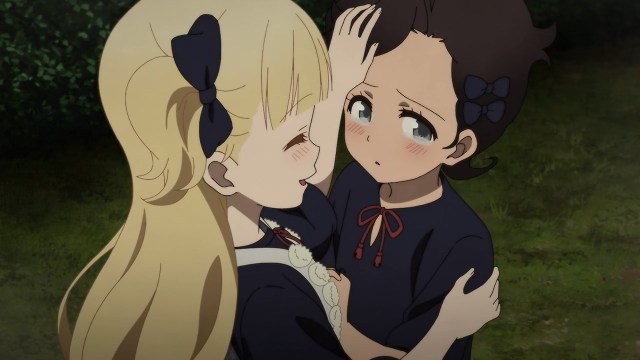 Emilico cheered up Rum, saying she couldn’t tell how shadows felt either but used her imagination to figure it out. She tried to stay positive and optimistic as a way to help ease Kate’s anxiousness. She told Rum that maybe Shirley didn’t like to talk either and she liked cleaning herself. Basically there wasn’t much for her to complain about Rum. Emilico’s words cheered Rum up and she was ready to find Shirley and use her imagination to try and understand her. After she left it looked like Emilico’s speech was meant to reassure herself as well. At least that’s how I interpreted her reaction.

After that we returned to Edward. He was approached by who I assume were his left and right hands, Jer and Allie. Long discussion short Edward’s master plan was to gain access to the third floor of the mansion where the elite shadows and Lord Grandfather resided. Once there he could proceed with his plan of a new world order under his rule. Then as he played the piano we got a surprise twist.

Either Edward’s half shadow or he could control soot too. Very intriguing.

Good stuff as usual. I have a feeling the next episode will be the conclusion of the Debut Arc.

Yuri and Slice of Life are my anime passion.
View all posts by OG-Man →
This entry was posted in G-Views and tagged Episode 8, Shadows House. Bookmark the permalink.