Gekidol Episode 10: Before the Curtain

Some more revelations along with a big play preparation.

We’ll start with the stage girls stuff then move on to the sci-fi stuff. So Akira plan for the next play was to introduce a never before seen play. To Lovemin’s surprise she’s appointed the playwright. Not knowing where to start Izumi had an idea. She found what looked like a diary in Kaworu’s room. More on that later. It was incomplete so Lovemin had to improvise the rest.

Once everyone unanimously approved Lovemin’s additions to the story Akira went ahead and chose Izumi to play the lead role of Miki Schteinberg. More on that later. Akira, Air and AIRI agreed. The reasons why as the Izumi side debated later, were obvious. She was super talented and had star power. It’s the same reason WWE keeps bringing in wrestlers of the past to compete at Wrestlemania (The talent part varies). Lovemin and Mayuri, however, voted for Seria, the incredibly talented newcomer. Surprised by the divide Akira was about to postpone the decision but Seria stepped up determined to play the main role. Impressed by her seriousness she scheduled an audition. The time had come for Seria to prove herself against Izumi.

Long conversation short the reason Lovemin and Mayuri voted for Seria was because since joining she’d already proven herself an incredible talent who kept improving every performance. The two were amazed and motivated by her progress. Lovemin even said her growth inspired her to write Miki’s role for her and through it realized a new talent in script writing. So Akira made the right choice. 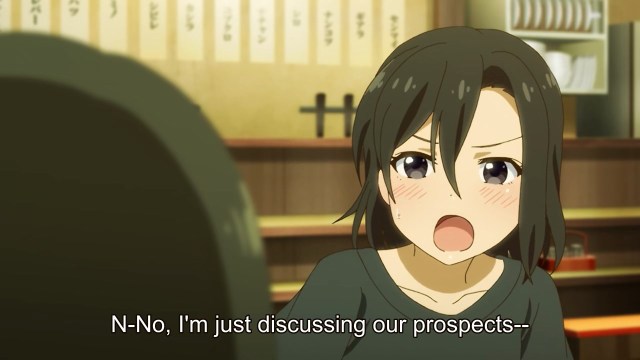 Long audition short Seria got the role because she went the extra mile and dug deep to become “Miki” while Izumi only focused on how Kaworu would play the role.

The main takeaway from this was AIRI of all people didn’t believe in Seria to carry a big show by herself. Will this get brought up next episode? Hopefully. The reason I say that was because of what happened in the sci-fi plot.

So the diary Izumi found was about two Gazer agents, Miki and Kyouko, sent back in time to stop a rogue organization called Innovators. One of their agents, Enri Viano, was hiding in a high school in the year 2012. Their mission was to stop her. From what we saw in Kaworu’s flashbacks she trusted the senpai named Azusa, who was Enri Viano in disguise. Kyouko was suspicious of her from the start. The next flashback came when Douche Producer found the pod Kaworu was inside of as a familiar aurora effect could be seen outside. In the flashback Kyouko was mortally wounded and it appeared the culprit was Enri Viano.

However, according to Doll, or as I’ll call her until things change, Doll 9000, as she went sci-fi horror on our asses, told Kaworu that her mission was to kill DP but because she loved him she went rogue and killed Kyouko or something like that. She wanted to show Kaworu the truth but she’s terrified to see it.

The big reveal of Kaworu being Miki all along was no surprise. I guess she rejected her mission out of love for DP and created the Kaworu alias. I still don’t care about their romantic subplot. What concerns me is it possibly becoming the main love story. It better not. Stick to being side-characters that add more pieces to the sci-fi stuff. We’re here for the Alice In girls, especially the maybe/sorta love triangle. Other than that, good episode.

By the way, whether Kyouko and Enri Viano looking similar to Airi and Izumi serves some kind of purpose or it’s just a cost saving measure to alter a character’s appearance and make them a brand new character I don’t know. Unless it is I won’t think about it too much. Not worth it.

Yuri and Slice of Life are my anime passion.
View all posts by OG-Man →
This entry was posted in Episodic Anime posts and tagged Episode 10, Gekidol. Bookmark the permalink.

7 Responses to Gekidol Episode 10: Before the Curtain