Looks like our heroines had a bit of a falling out this episode.

We began with Sorawo (Guess it’s with a “w” all along.) seeing visions of the Space-Time Man warning her not to return to Otherside with Toriko.

The next day as Sorawo gazed upon a big meal with Toriko ready to plan their next “adventure” she had a talk with her:

Toriko: She IS alive…She has to be be. She’s really important to me so please help me find her.

Sorawo: Why do you expect me to risk my life for someone I’ve never met?

Later we found Sorawo at Kozakura’s house. She explained that she tried going to Toriko’s house to apologize for not properly voicing her concerns but when she got there a lot of creepy stuff happened. Worst of all Toriko disappeared, thus she came to Kozakura for help. She initially hesitated but changed her mind when she saw a photo of what appeared to be Satsuki. There were too many convenient events one after another.

As she puzzled over the coincidences weird people knocked on her door. Sorawo sensed their hostility as they got louder and scared even me. I had the lights on by the way. 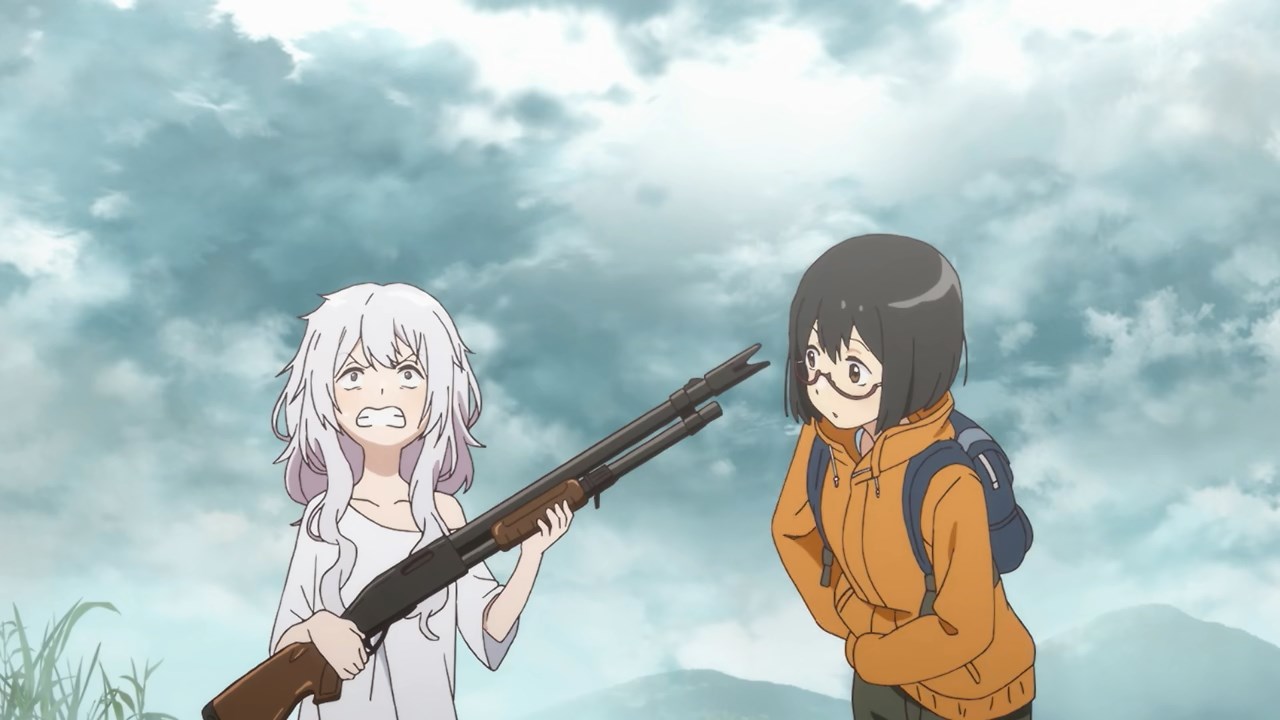 After that brief “WTF MOMENT” Kozakura was forced to join Sorawo in her search for Toriko because they somehow were warped to Otherside by the creeps. Good thing she came prepared. Plus she was as worried about Satsuki as Toriko so she hoped to find her.

From one “WTF MOMENT” to another, Sorawo’s backstory. After Kozakura eloquently told Sorawo that she “gets scared easily” Sorawo shared her backstory. I…have no words. No wonder she had a pessimistic outlook on life before meeting Toriko. I mean, “pooooooof”. That’s the sound of my brain overloading. Toriko’s backstory from what Kozakura told her was more sensible in comparison.

Before we move on we got this little moment. So Kozakura’s freezing. 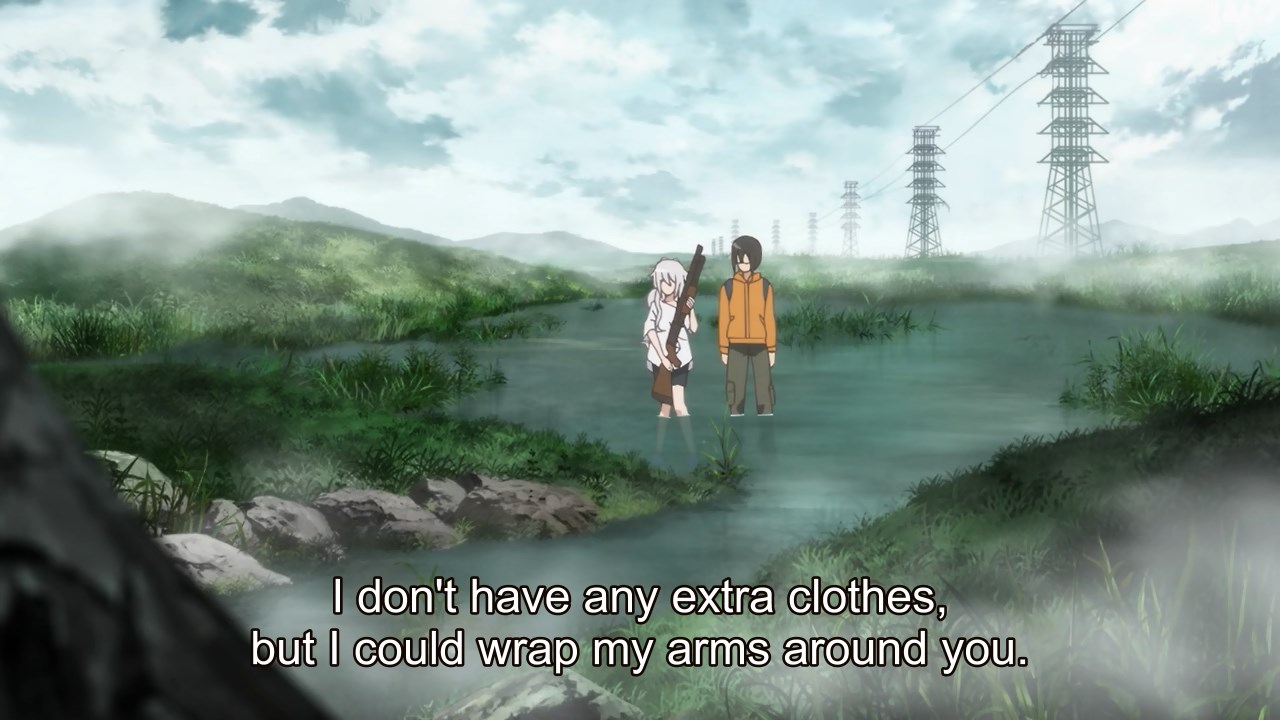 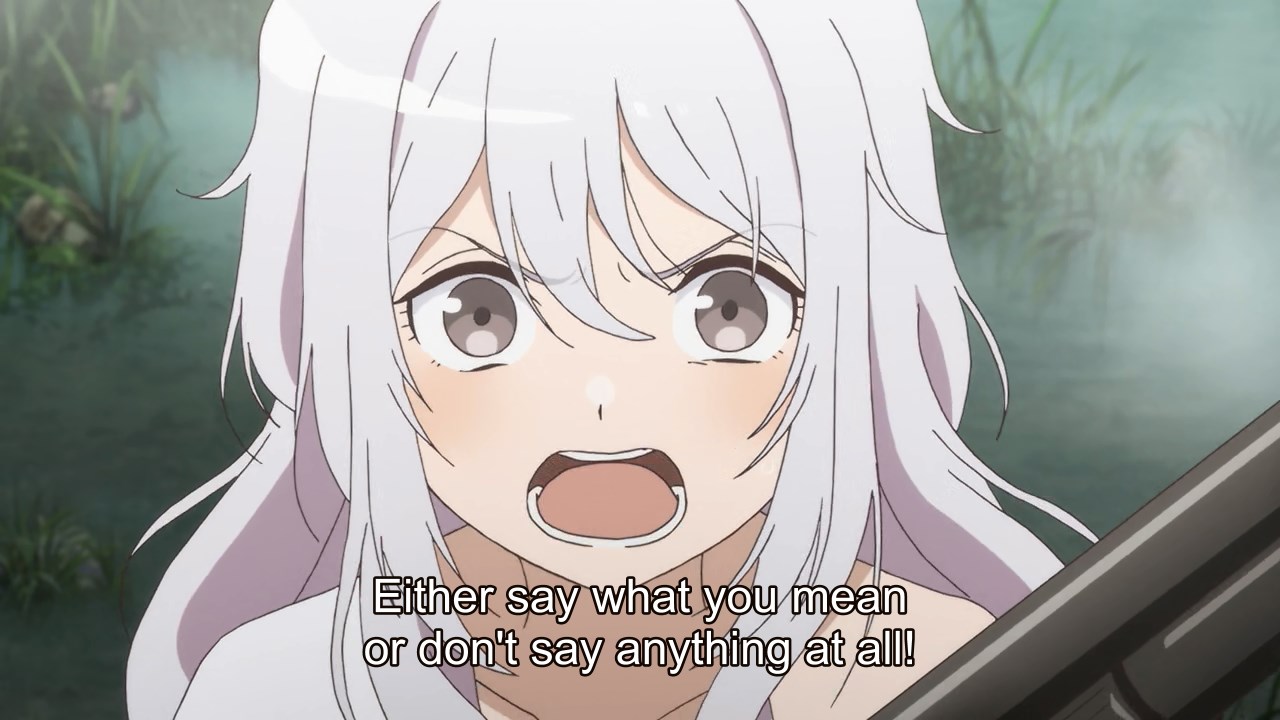 Gotta watch your words around Kozakura. 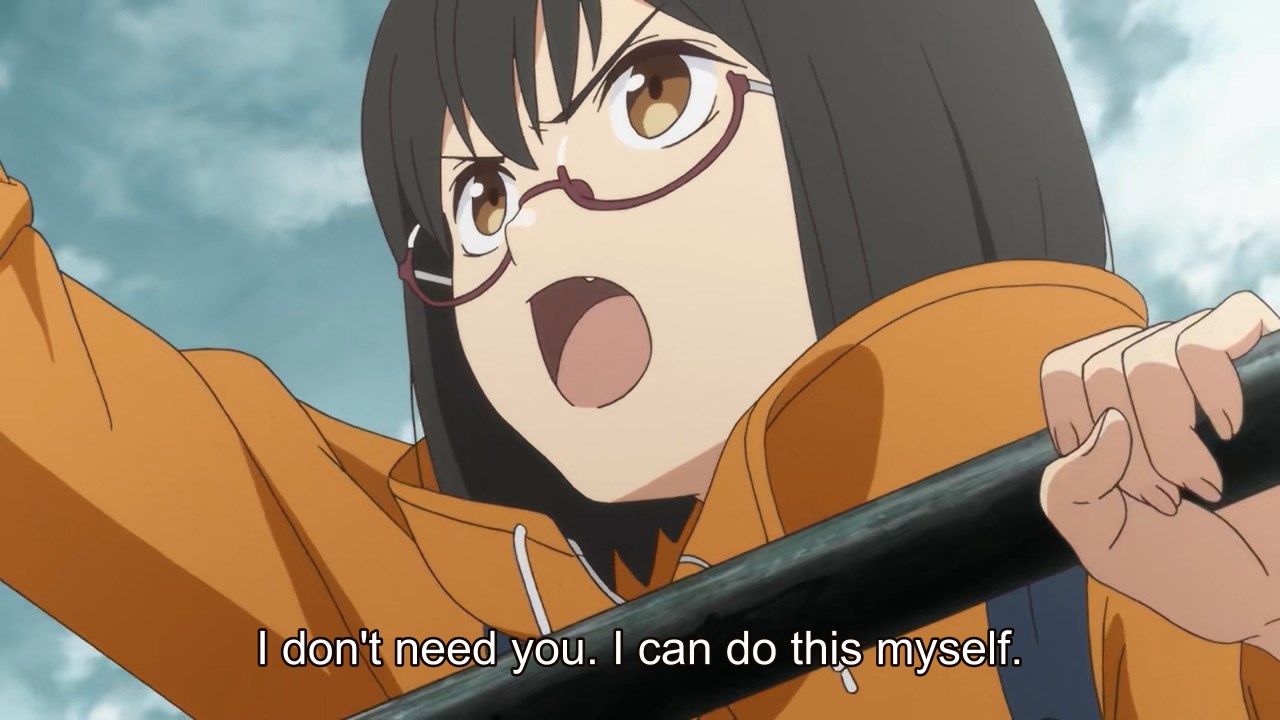 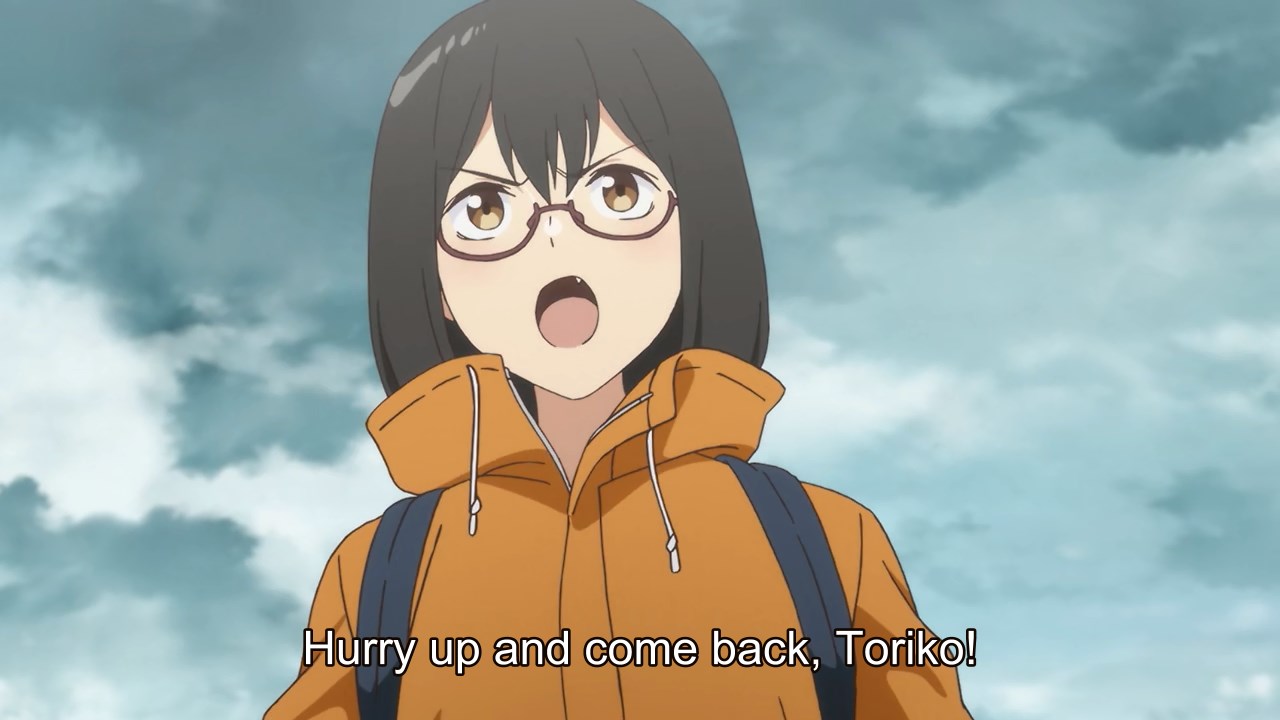 The two found shelter. As Sorawo climbed up a building to scout the area she again thought about Toriko. She thought how much scarier Otherside suddenly was without Toriko around but then she was like “No. I got this. I don’t need her help. You hear me Toriko!? I can make it without you so come back to me damn it!”

On top of the building she thought she saw Toriko and signaled to her but no response. Then she thought she saw Kozakura wander off somewhere, followed and was approached by the Space-Time Man who messed with her head. Fortunately Kozakura was indeed nearby and snapped her out of her trance. As they continued their search Sorawo used her power to analyze the area. The moss people weren’t exactly illusions. Suddenly she was freaked out by an evil looking Sorawo pulling a Pennywise. She chased her doppelganger and found Toriko.

This time Sorawo wasn’t under the Space-Time Man’s trance but Toriko. she thought she saw Satsuki floating but… 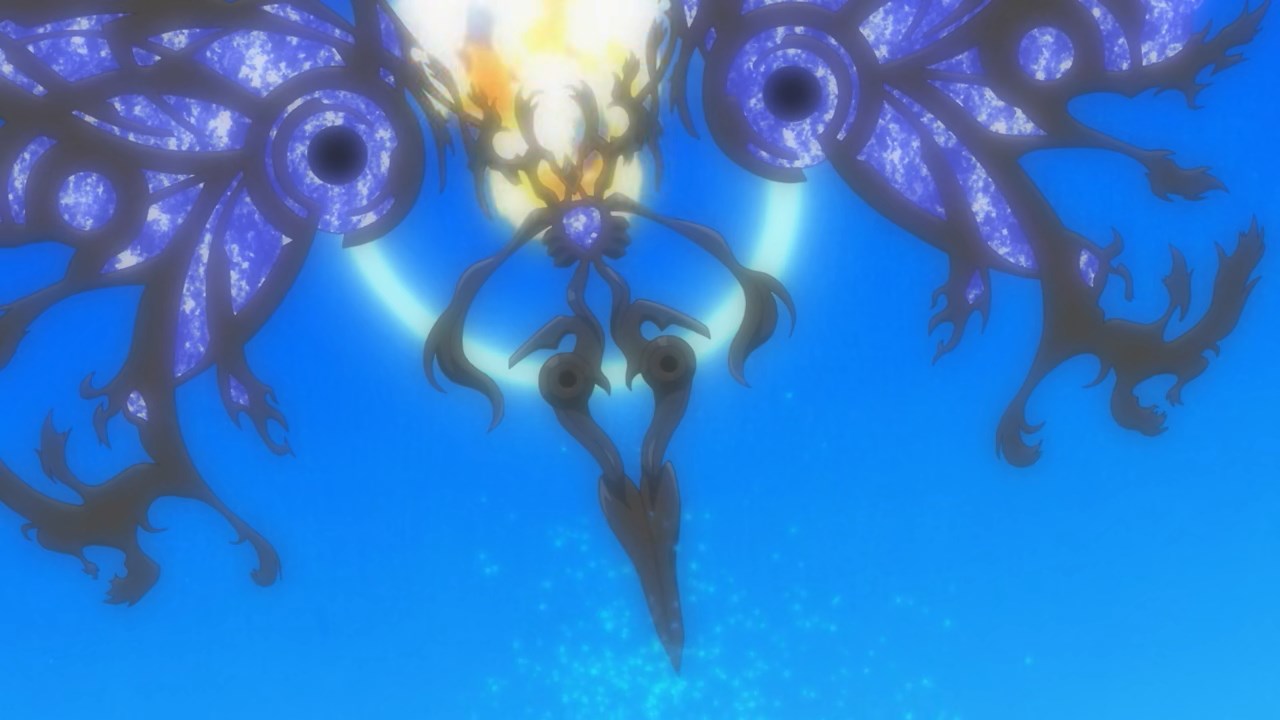 I think she talked about the Otherside monsters preying on people’s fears to lure them into their traps. Well she said it was to “communicate with us through fear” but yeah.

I think Sorawo chased the Space-Time Man away with rifle shots. The two patched things up afterward. 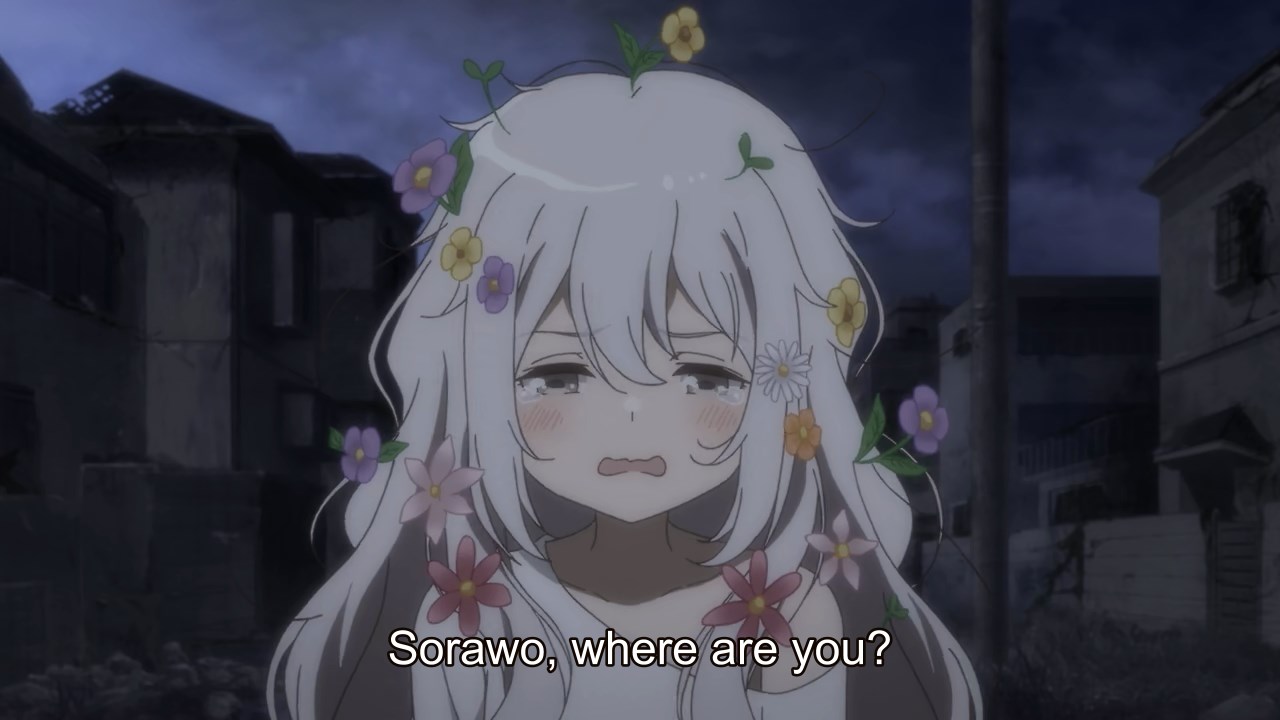 Only to get chewed out later by Kozakura for abandoning her. Good stuff yet again.

Yuri and Slice of Life are my anime passion.
View all posts by OG-Man →
This entry was posted in Episodic Anime posts and tagged Episode 4, Otherside Picnic, Urasekai Picnic. Bookmark the permalink.