It was the 2nd year of high school for our heroines. Change was on the horizon. Everyone could feel it but had no idea what awaited them.

We began the episode with Adachi thinking about GOD and wondering if there was a divine entity she could pray to to grant her wish, being in the same class as Shimamura in year 2. The Lord works in mysterious ways, even in yuri stories. I do believe this was the first time viewers learned Adachi’s first name while Shimamura’s may have been mentioned once before. It’s Sakura Adachi and Hogetsu Shimamura.

I mentioned this before but it’s kinda scary how relatable Adachi is. Perhaps for some viewers it’s Shimamura but to me I 100% relate to Adachi. Again it’s a little scary. 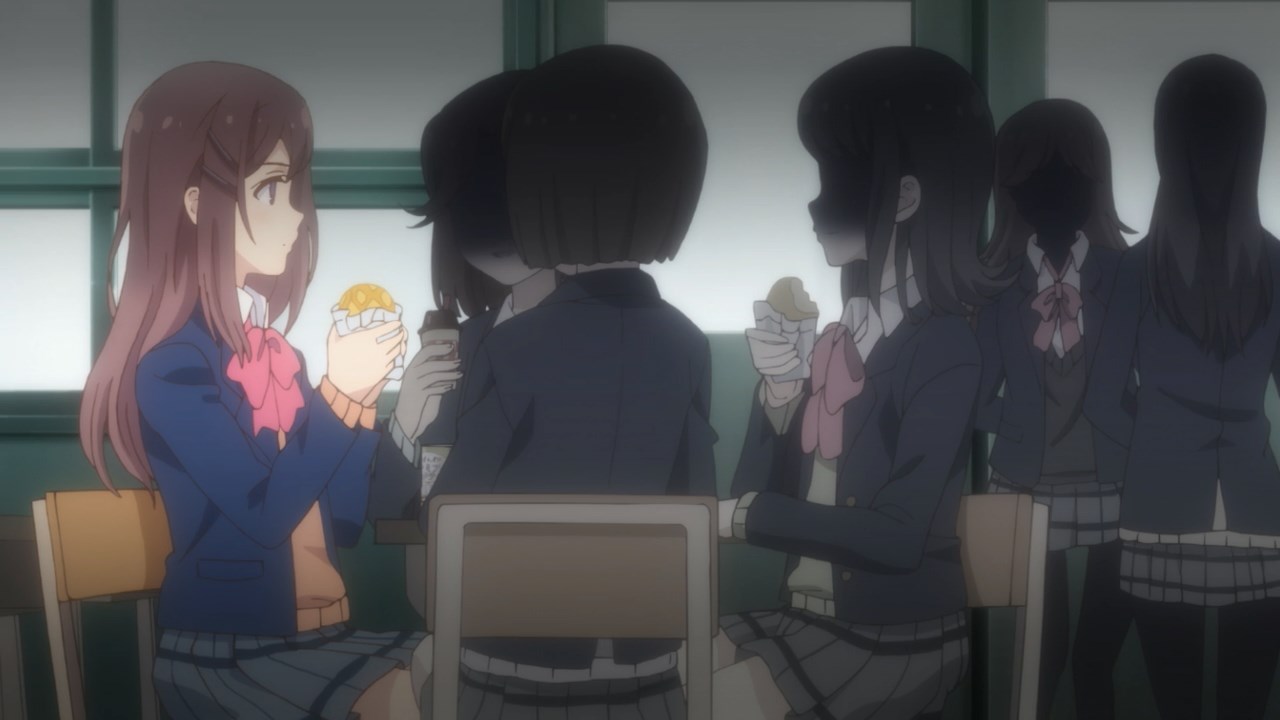 I’ll go into more detail on this moment later.

Shimamura’s reasoning for not getting along with others or forming close friendships with people was this. While it made some sense, the thing about relationships that I learned the hard way back in my school years (all the way to college) was to make the first move but not go too hard. With friends you just gotta be brave and step up. Relationships are absolutely a game of chess though but Shimamura’s deal was with people in general.

One thing that hadn’t fully changed was Adachi’s passive possessiveness of Shimamura. She did not want to share her with others. She barely coped with Nagafuji and Hino but Pancho, Sancho and Delos were pretty much strangers to her and she wasn’t ready to step up again choosing to retreat instead. Adachi was absent for a while since then. Shimamura considered looking for her at their old spot but again thought it was “going back to the regressive past” like the last time she thought about “their spot”.

One day as she left school Shimamura’s phone rang. Deep down she hoped it was Adachi but Tarumi was on the other line. She invited her on another (not) date to make up for last time. Tarumi went all out, openly thinking how to best open up to Shimamura. 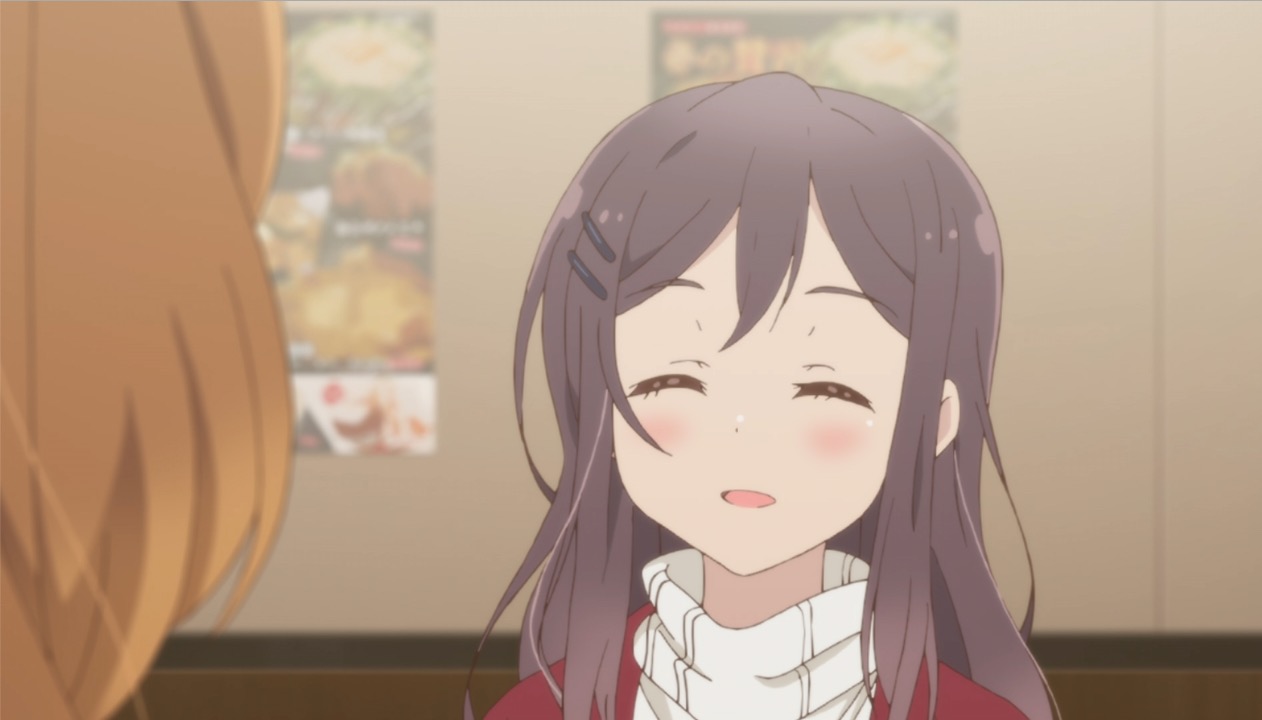 As hard as both girls tried their second (not) date was almost as awkward as the last. Most likely a combination of Tarumi trying really hard (not exactly TOO hard because she’s aware of it) and Shimamura “not feeling it”.

To make things even more awkward Tarumi could tell Shimamura wasn’t all there.

Fortunately Shimamura cut her some slack when she revealed her main goal. Pretty sure her ultimate goal was something beyond friendship but we’ll talk about that next time.

Oh right. Yashiro showed up at that moment, giving fans of hers more credence she’s an alien cupid who may hook up with Shimamura’s imouto.

Let’s go back to this scene again. This right here showed us despite their different mindsets…Adachi and Shimamura weren’t that different from each other. They both saw people they didn’t care about as shadows or dark figures. They could talk with people, sure, but it’s not like they’re really invested in what others had to say. As Adachi said before Shimamura was her “sunshine”. Symphogear fans KNOW how powerful that is. Meanwhile Shimamura had the classic “the heart knows what the brain doesn’t”. She keeps saying how she can’t feel anything with other people but can’t quite understand why it’s different with Adachi.

Excellent episode as it showed Shimamura slowly getting there. Next time looks like things will step up yet again. 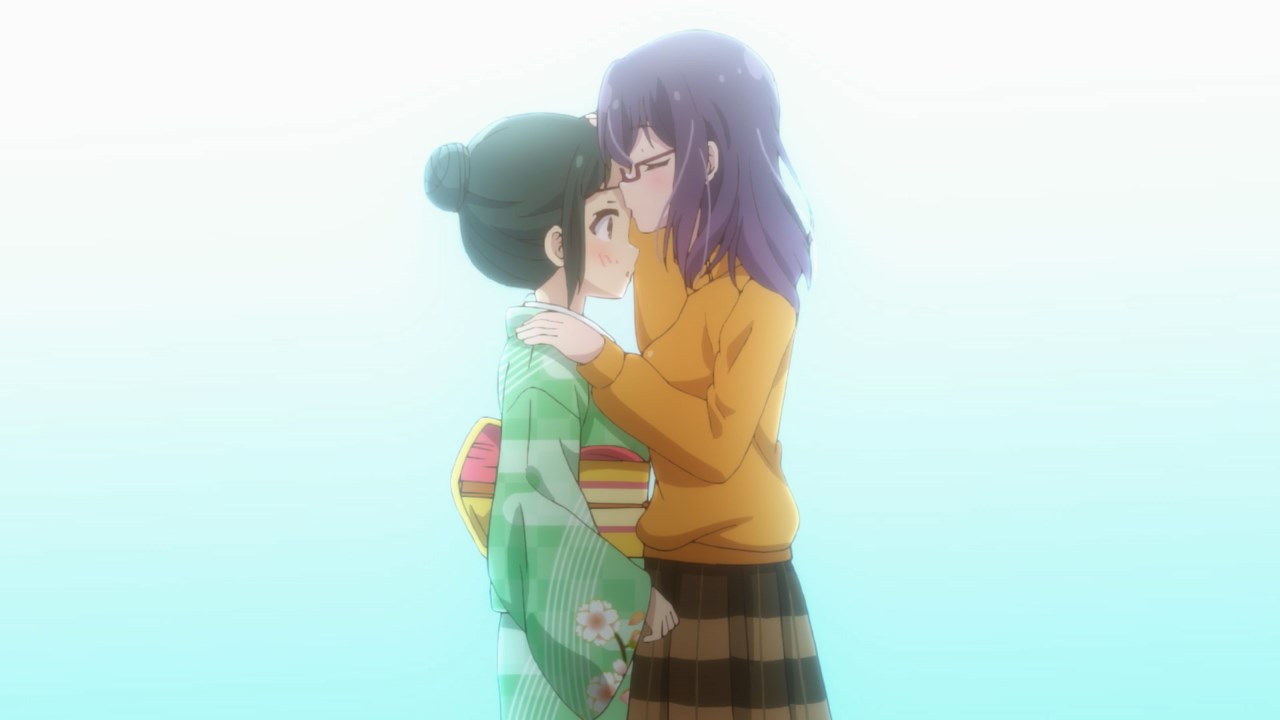 DID YOU REALLY THINK I WAS GOING TO FORGET THESE TWO!? Come now ladies and gentlemen. You know how invested I am in NagaHino. I bet you think I’m going to just say “You have to see it for yourself”. HECK NO! We are diving in head first this time brothers and sisters! So we joined Nagafuji visiting Hino’s house, aka a mansion. Their relationship was the same, Nagafuji barely containing her true feelings for Hino and Hino unsure how to react.

I think the reason why Hino’s relatives’ faces aren’t fully shown is because they’re part of the problem for her. Put simply Hino’s an ojou-sama but she’s also a tomboy who couldn’t care less about the “hoity toity-ness” of her family name. Nagafuji noticed this.

As both ladies surprised people of culture in the bathhouse Nagafuji jokingly talked about trading houses with Hino who gladly would have accepted as she preffered a common life more. She even said nothing would change were she to leave her home.

Suddenly Nagafuji was like “Not in public but when we’re alone they’re all yours baby”. As Hino tried backing away Nagafuji wouldn’t let her go, leading to Hino most likely solving the puzzle. I mean NagaHino have to be official by now or close to it.

As always no manga/light novel spoilers.

Yuri and Slice of Life are my anime passion.
View all posts by OG-Man →
This entry was posted in Episodic Anime posts and tagged Adachi and Shimamura, Adachi to Shimamura, Episode 10. Bookmark the permalink.

14 Responses to Adachi and Shimamura Episode 10: Winds of Change