Although we already talked about some early screenings Fall 2020 officially starts NOW with this highly anticipated show. Let’s see what awaited us in the premiere, shall we?

They knew what we came to see, yes. There’s plenty more where that came from. 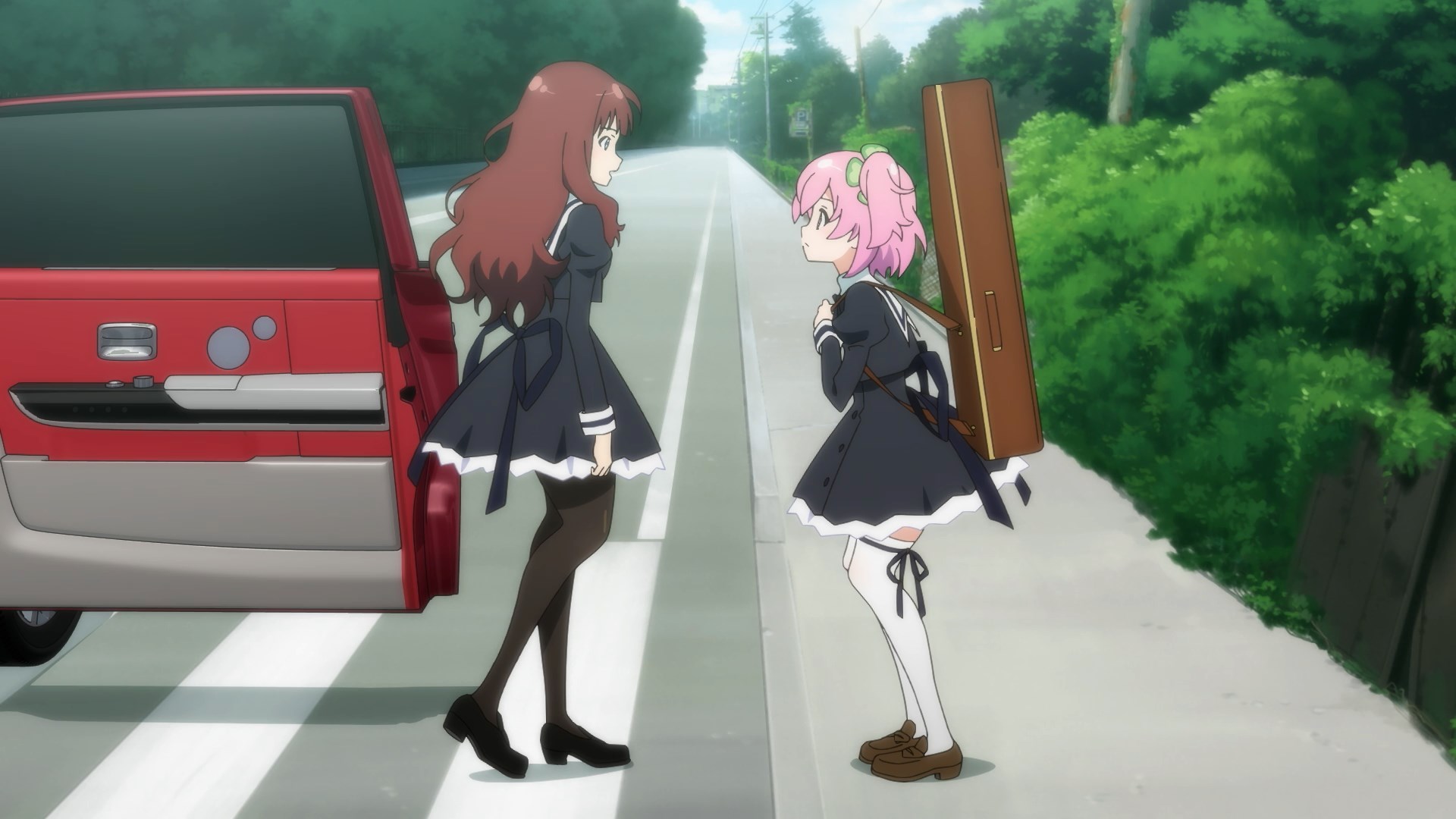 The prologue showed an epic battle but we’ll talk about it later. Let’s start with our main heroine, Riri Hitotsuyanagi’s introduction. She’s an aspiring Lily. Lilies are warrior girls with magical powers who are the only ones capable of fighting the alien threat known as the “Huge”, which are extraterrestrial robot things like the Neuroi. Riri was lucky enough to be chosen from the “We’ll call you” waiting list. She narrated all this to viewers in an adorably clumsy way. Upon reaching the front gate of the “Yurigaoka Girls’ Academy” (Yuri. Gao. I heard of such a combination once before, yes) she was nearly run over by the car of the ojou-sama Kaede Johan Neuvel. Ah yes. Riri gets teased for her name. “Riri the Lily”. You know, “Riri the Riri”. 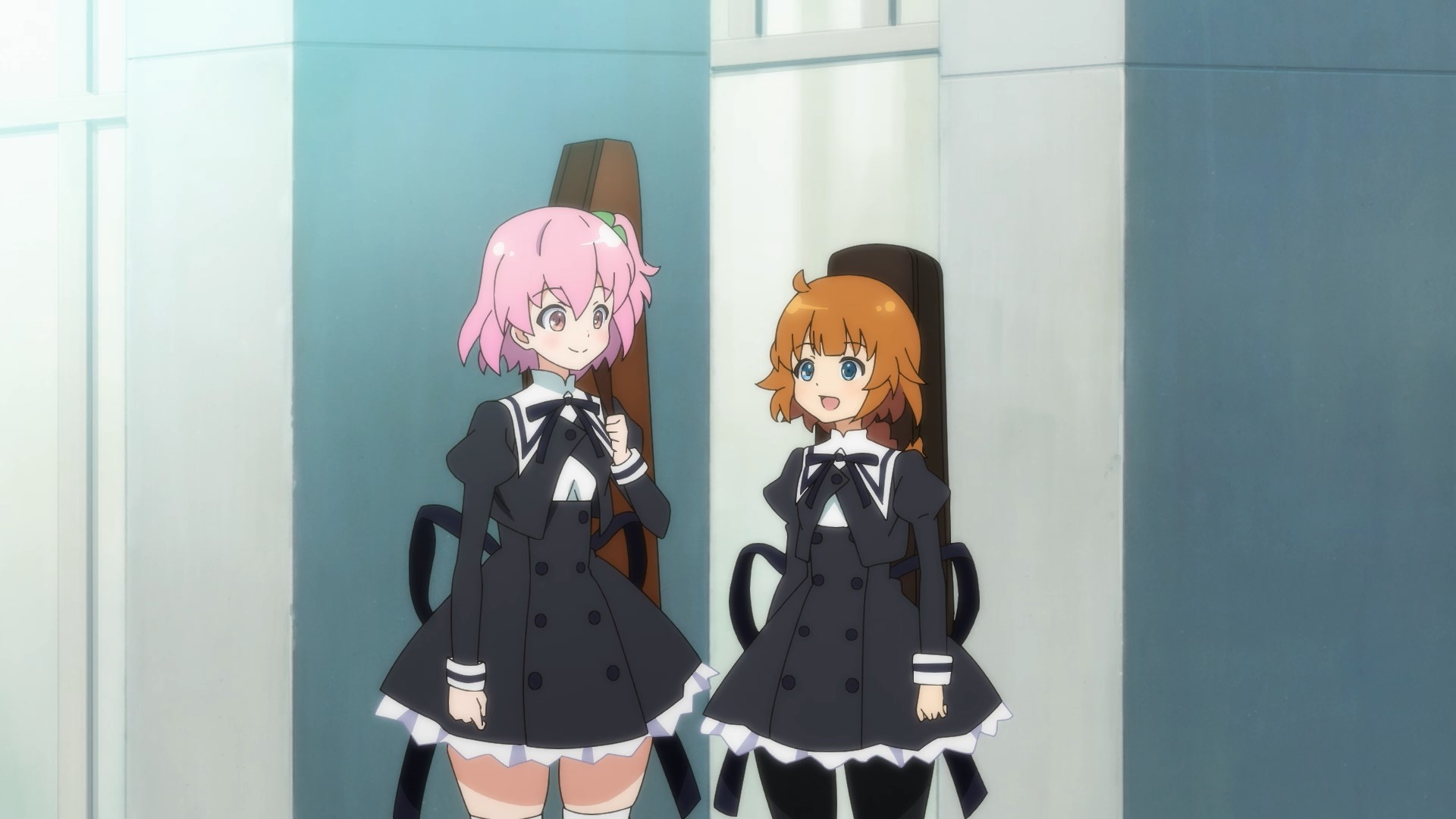 Fumi Futagawa. She’s a big fan of a newsletter that reports any and all happenings related to Lilies. That’s how she knew about most of the students despite being a newcomer like Riri.

Araya Endo. She wants to become Yuyu’s “Petite Soeur”. Oops. Wrong series. I meant her “Schutzengel”. Who is Yuyu? 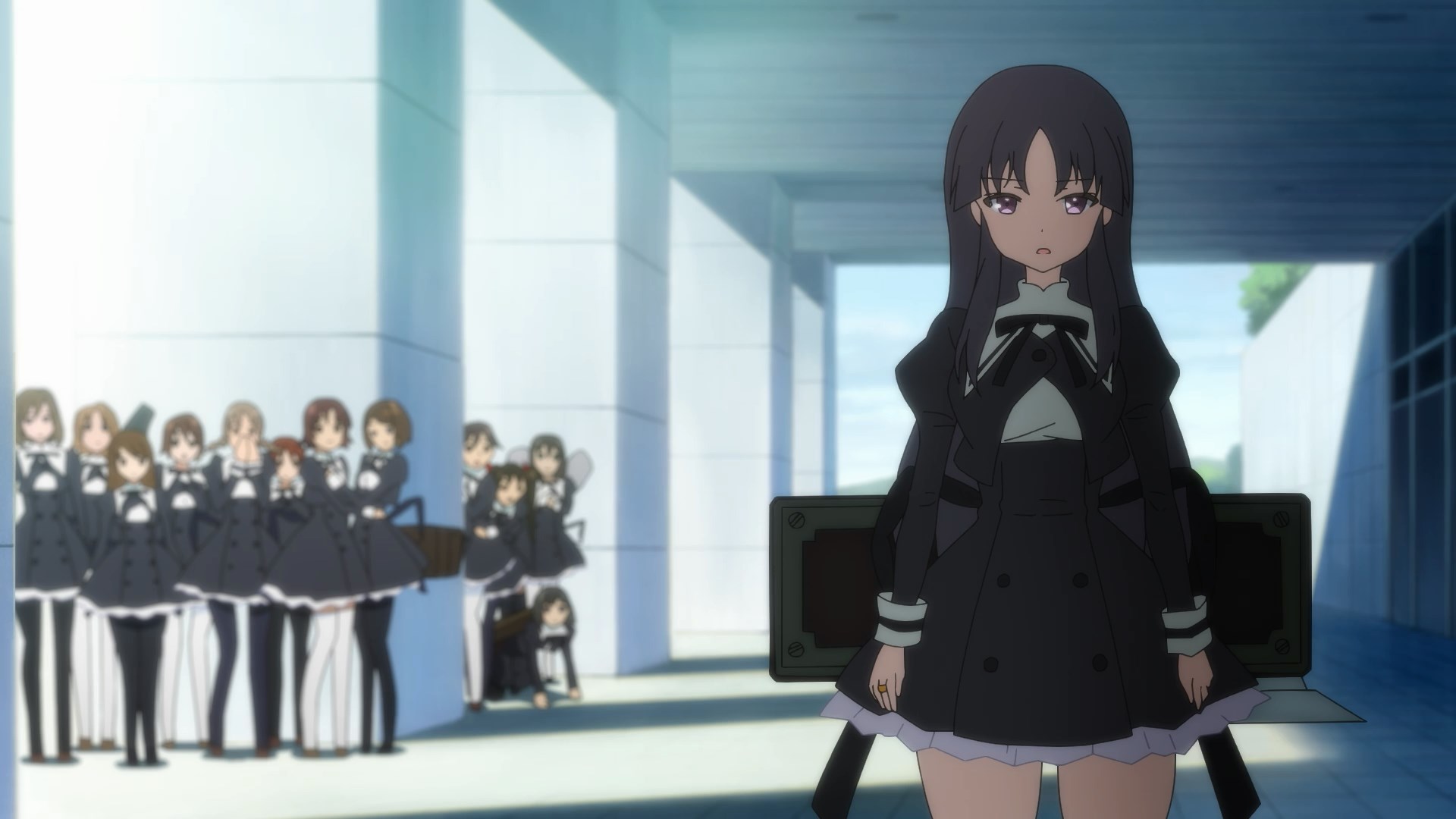 Yuyu Shirai. An ice queen veteran Lily. She had no interest in dueling Araya but wouldn’t turn down a challenge either.

Based on Fumi’s reaction Miriam Hildegard von Gropius here may be her type. That or she’s a hardcore Lily fangirl. I’ll go with the former.

Here we have Ichi, Soraha and Kasumi. Ichi is probably Araya’s roommate or in the same class. Not sure. Soraha is probably Kasumi’s “Prince”.

Upon seeing Yuyu Kaede rushed over to prove herself a worthy “Schutzengel”. Riri, however, was like “Lily shouldn’t fight each other” and surprised Kaede by stopping her from outta nowhere. Before any battle could ensue a senior Lily informed the girls of a Huge on the loose. Yuyu was ready to track it down herself but the senpai told her she needed a partner. She had Kaede go. Riri got herself to join the party, much to Kaede’s irritation. 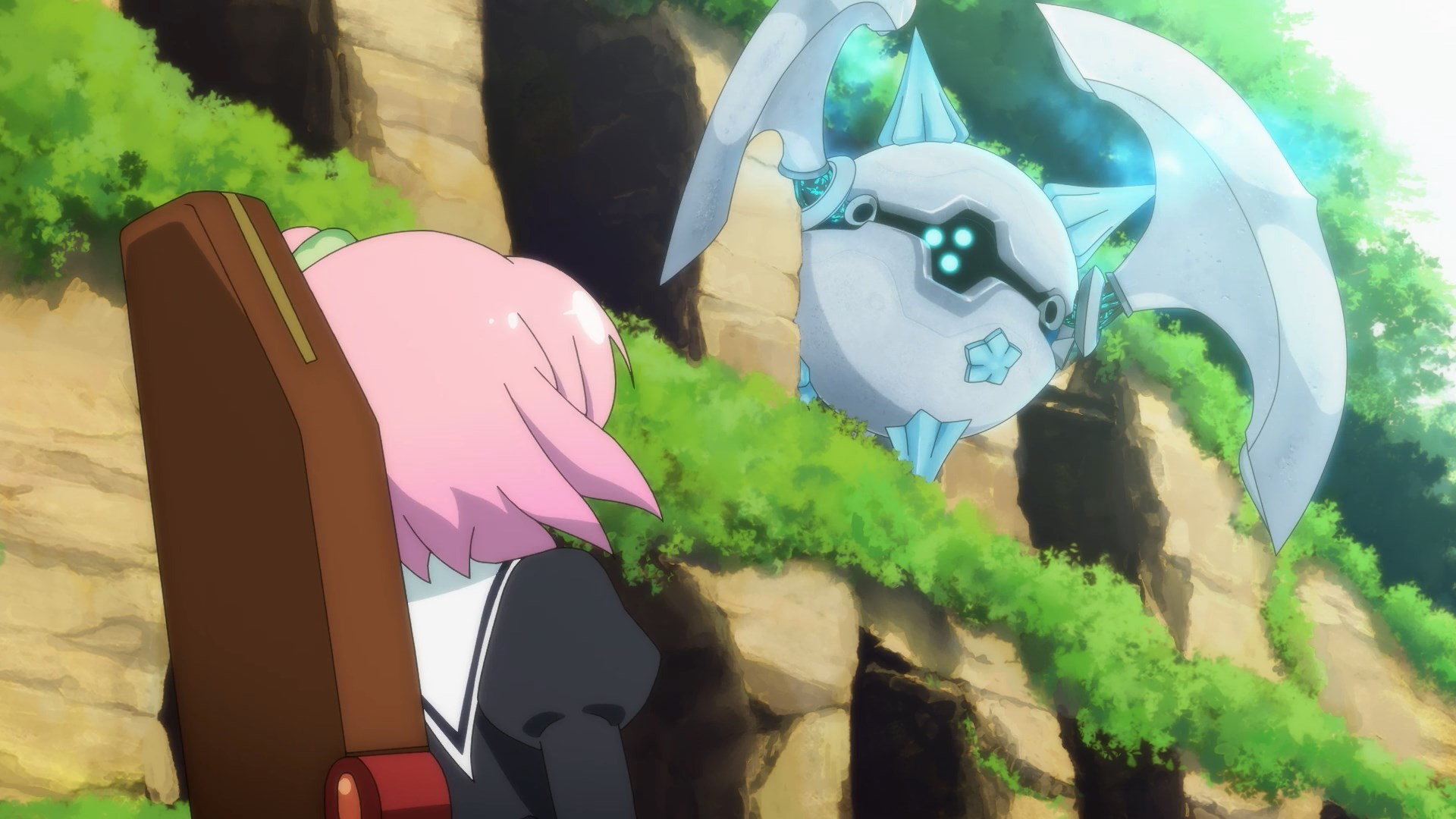 They ran into the Huge at a historic battle site. Riri tried engaging the Huge but we would soon find out she hadn’t made a pact with her CHARM (A Lily’s weapon) yet. Fortunately Yuyu got her out of harm’s way but the Huge scarred her arm.

Some kabedon action right here as Kaede scolded Riri for her “incompetence”. Yuyu helped Riri form a quick pact with her CHARM while Kaede held back the Huge. Suddenly a smokescreen.

Yuyu readied for an attack but Riri’s excellent country girl vision and senses detected a Kaede Rush so she helped Yuyu dodge it in time. The Huge tried having the Lilies attack each other.

Pay close attention to Yuyu’s CHARM here. It will be important soon.

Riri wanted to help Yuyu fight the Huge. The CHARM sensed her resolve awakening its combat mode. Kaede saw an opportunity for her and Riri to team up and finally take down the Huge. It crashed on the hillside causing a rock slide. Riri pushed Kaede to safety (Remember this) while Yuyu shielded Riri. 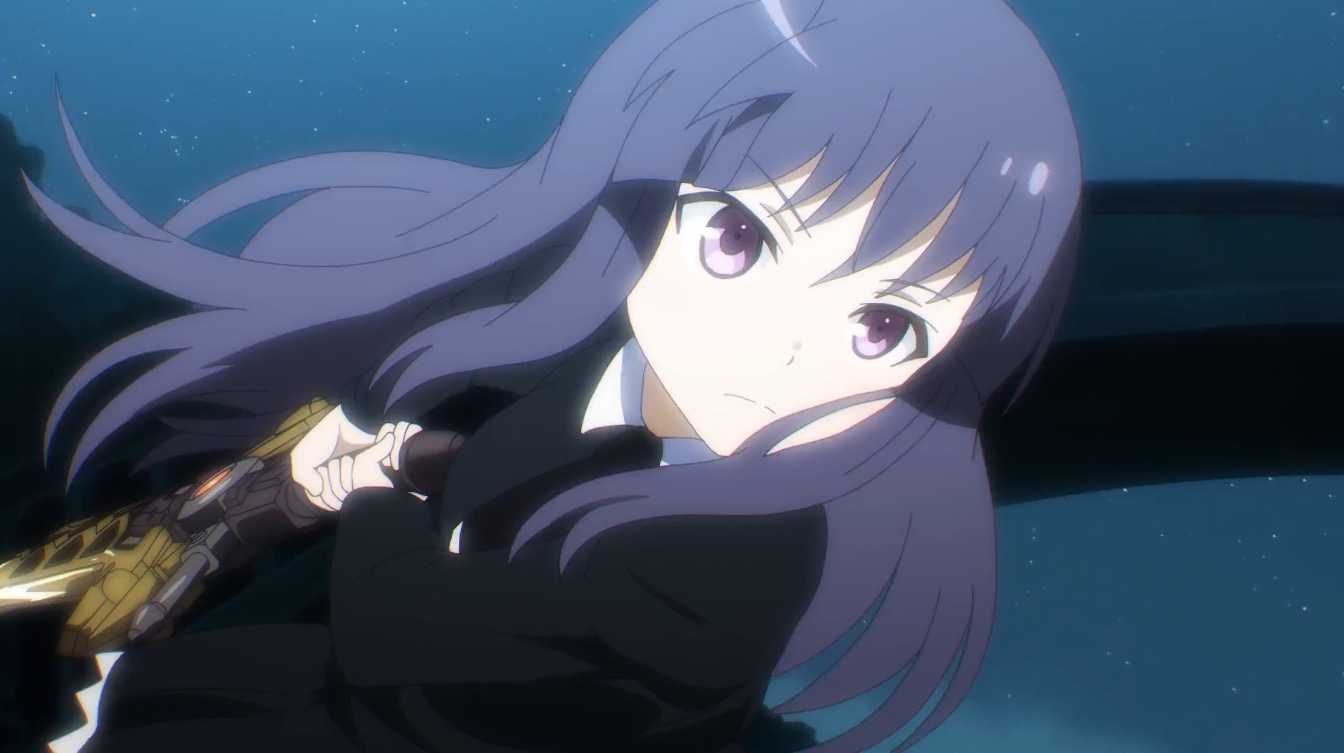 Time to talk about Yuyu’s CHARM and the prologue scene. Two years ago Yuyu and her Lily partner saved Riri and a friend from a Huge. Back then she wielded a different kind of CHARM. Riri was inspired by her coolness to become a Lily herself though was surprised by her current coldness compared to back then.

Moyu Mashima. Most likely a Huge researcher. Reminds me of a certain Titan researcher. She also looks like Asuka from Euphonium. I love Asuka so that’s a good sign.

Remember how Riri saved Kaede from the rock slide?

Yuyu ain’t the Lily she wants to be a “Schutzengel” with anymore.

Yuyu’s roommate. She helped her save Riri and her friend two years ago.

Badass fight scenes, cute and sexy gays and of course thicc thighs. I am so ready for more.

BTW, check out the ED for some more yummy goodness.

I don’t know if her name is meant to spelled “Riri” or “Lily”.

Yuri and Slice of Life are my anime passion.
View all posts by OG-Man →
This entry was posted in Episodic Anime posts and tagged Assault Lily: Bouquet, Episode 1. Bookmark the permalink.

30 Responses to Assault Lily – Bouquet Episode 1: A Tale of Blades and Gay Thighs