We already talked about the anime so of course we must now talk about the game it was building up hype for. Question is whether this lesbian jet ski racing game was worth the wait. Let us find out as we once again take a look at Kandagawa Jet Girls, developed by Marvelous and Honey Parade Games, published by Marvelous and XSEED.

Length: 12+ hours to beat all the Story campaigns (Not 12 hours each)

The sport of the future is here: jet racing! The brightest, most daring young athletes in Japan take to the waterways of Tokyo on high-tech jet machines. Each Jetter, or driver, pairs up with a Shooter, who blasts the opposition with various types of water guns. The fans are wild, the races are wilder, and the water’s great! But there’s more at stake than a trophy or two. Each racer has her own dreams, her own driving force pushing her onward. Some race for glory, some out of obligation, some to show their faith in a higher power, and some for nothing more than the thrill of it all. And each one, together with both her partner and her competitors, has a heartfelt story to tell.

Experience tales of friendship, hardship, family, and love, all infused with a rush of adrenaline in a whole new kind of racing. The Kandagawa River is ready for your challenge!

Each team/couple’s story remains true to the description of “gay jet ski racers” though some of them are more open with their feelings than others. Some are subtle, others not at all and a few want Taco Bell, like in the anime. Which ones are gayer I will leave up to players to find out though readers who saw the anime already got some hints from the main six. Speaking of the anime Rin X Misa’s story is similar. There are differences between when important events happen and which teams they race but their overal story arc is largely the same. Think of their in game story as a slightly altered abridged version of the one in the anime. The other couples have their own stories to tell so one of the big draws is learning more about them. We got a few snippets of their stories in the anime but they are expanded in the game. As for the Senran Kagura DLC girls they are just extra playable characters.

Then there is the exclusive seventh couple, Grindcore. Readers can tell from their appearance they are the “Bad Girls” team (Well, one more than the other). Like the others the yuri power is definitely with them too.

Next up is the presentation. Like other games in the “Takaki-verse” (Senran Kagura and Valkyrie Drive) the characters all look cute and sexy with cutscenes presented in classic Visual Novel or Japanese Adventure Game style but with the characters moving. For readers who played games in the aforementioned franchises the one thing that stands out will be noticed right away. That being the girls’ teeth. It is an interesting. Usually in Japanese media girls and women are rarely drawn with visible teeth (Not counting single/double fang/s or jaws) but here the ladies’ choppers are fully visible. Nothing against them at all, just interesting seeing a game with an all-female cast feature them. It is a rare but welcome sight. The tracks all look pretty cool set across waterways in various Japanese locations. Though the tracks are all in cities they find ways to stand out, especially the Tokyo Resort. Each track has three unlockable times of the day: Day, Dusk and Night. While the only difference is the time races are set in it is nice to see the various changes in scenery. The races are visually pleasing to watch also with racers streaming across waterways shooting, dashing and splashing all the way through. Good stuff. It is not “Triple A” quality water effects but for a water racing themed anime game they look quite good. The soundtrack is nice with each team playing their own theme during Final Laps. Nothing amazing but the tunes are fun to listen to like in the Senran Kagura franchise. 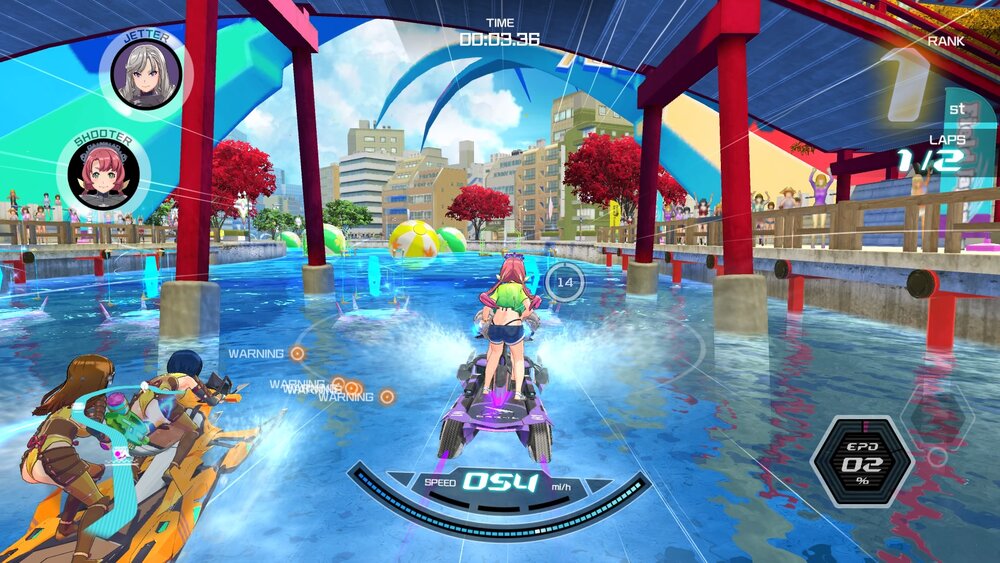 On to the gameplay. Best way to describe is “Waverace meets Mario Kart: Double Dash”, sort of. The concept is one girl is the Jetter and the other the Shooter but unlike Double Dash they cannot switch mid-race. At first the only playable Modes are Story and the Mini-Games in the Locker Room but beating the first Story race unlocks the other Modes. More on them in a bit. The game play, as mentioned is Waverace X Mario Kart (or any other Mascot Racer) in which players surf on their jets and shoot down opponents’ shields to slow them down. Besides the default water gun there are other sub-weapons in the “?” “boxes” such as the Rifle, Shotgun and Grenade Launcher. They all have their range of effect. Weapons can be upgraded to Special Weapons when the “Energy Meter” is full. Racers can pull off stronger versions of the sub-weapons or Extra Boosts (similar to the Gold Mushroom) or temporary invincibility. The “Energy Meter” can be filled up slowly by racing or performing other things such as drifting, attacking opponents or pulling off tricks. Besides Special Weapons the Meter also serves as a Boost. Part of a winning strategy is knowing when and how to use energy. While the Tutorial can be skipped it is recommended to check out how mechanics work, such as drifting, raising and lowering the jet nose and pulling off tricks off ramps. Each jet has their stats, Handling, Speed and Acceleration and riding them feels quite smooth so racing has little to no issue.

Although the number of locations is not massive (and many of them are the same location but on a different time of day each one has three different routes, meaning three tracks per course, ala Super Mario Kart and its 3 different Mario Circuits, Donut Plains etc.

Going back to available Modes. As mentioned earlier each of the seven couples have their own Story Campaign. Players start off with Rin and Misa but quickly unlock the other five couples. Grindcore are unlocked later. At first I thought all the other Stories would be unlocked but they are random from the looks of it. Keep playing until they are all available.

Next is the Locker Room. Like other games in the “Takaki-Verse” there is plenty of customization items to unlock and purchase (using in-game currency though there are DLC items too) from costumes for the girls to Jet upgrades and accessories like skins and decals. With the former players can not only change the girls’ appearance and hairstyle but their skin color too, which I believe is a first for the “T-V“. Whether that is a good or bad thing depends on who one asks. The usual other items like event CGs, songs, etc can also be unlocked for purchase. Besides the shop and customization the other available activity are the Mini-Games such as washing the jet or swabbing the ship deck. They sound simple in description but the gameplay is a little more than that, from pressing the right buttons, avoiding obstacles and timed button mashing. There are four Mini-Games, each with 3 difficulties. While they can get repetitive over time they are the quickest way to earn money in the game as far as I know.

Third is Free Play. Here players can team up whichever girls they please together. For example, Manatsu and Emily’s partners are Yuzu and Jennifer respectively but say players want to race as Manatsu and Emily together? In Free Play that can be done. Also players can pick whichever available course and track to race on and increase the A.I. difficulty in case Story Mode was not difficult enough, which it is not really.

Fourth is Time Trial. That is self-explanatory.

Fifth is Online. More on that in a second.

I have said good things about the game so far but now it is time for the unavoidable critiques.

The “Intimacy Mode” found in other “T-V” games before getting cut from the PS4 version of “Senran Kagura Burst Re:Newal” is not present in this game either. Same goes for the “stripping in combat”. On the bright side several of the unlockable costumes are quite sexy.

The five modes I just mentioned? Those are the only ones available. In a time where most racing games are packed with different modes KJG is lacking in Single Player content. There is no Grand Prix or Battle Mode. While personally that is not a huge deal it is very noticeable.

There is no local Multiplayer, only Online for up to 4 players. Online is basically Free Mode but on the internet. As someone who rarely plays online multiplayer this is a bummer.

Overall Kandagawa Jet Girls is a fun and sexy racing game but its lack of Single Player content and no offline multiplayer does sting. The couples’ stories are absolutely worth experiencing, especially for fans of the anime, it is fun mix up teams in Free Play, the customization is very good as is the presentation. There is a lot to like in the game but not enough modes to enjoy it for long. It kind of reminds me of Kill La Kill The Game: IF, fun to play but not much to do in Single Player and the roster is not that big (Although KJG’s is pretty good including the DLC and the various team combinations). I recommend it to fans of the series though whether they will pick it up right away or wait for a good enough discount is up to them. Again a fundamentally good racer but not enough modes to play longer than brief stints, which is not a problem depending on who one asks.

The game is available physically in the US, Europe and digitally on PSN and Steam.