Over the years the main draw in most games for me was whether the game featured a female protagonist or cool/cute/sexy playable lady. That is what drew me to this game. Question is whether my instincts led me to victory or defeat. Let us find out as we take a look at Dusk Diver. The console ports were published by PQube and the game was developed by WANIN Games, JFI Games, JERA.

Length: 10-12+ Hours (Depends on how many side-quests players complete)

Plot Summary: Yang Yumo and her best friend Liu Yusha arrive at the bustling city of Ximending, Taipei. They have aspirations of going to a university there when out of nowhere a rift to the Phantom World of Youshanding appears. Yumo feels a strange energy inside her, confirmed by a shady looking “old man” dressed like a gangster named Leo. At first she has no desire to enter the other world to fight the phantom beasts but is convinced when Yusha’s and the rest of Ximending’s lives are at stake. Uncertain but determined Yumo joins a group of Guardians to protect the city and the people from otherworldly invaders.

Put simply the story felt like a prologue or origin story to something greater. Yumo meets Leo, the Boss and other Guardians to uncover the mystery of why the dimensional rifts are happening along with the identity of a mysterious attacker targeting the Guardians and everyone close to them. There is not much backstory to Yumo and friends. To make up for that the cast are all fun, quirky and likable fellows and ladies. Players learn a little bit of the cast through certain cut scenes and side-quests but do not expect deep character exploration, hence why I said their amusing interactions make up for it. It is a neat story and hopefully there will be more to come in the future.

Exploring a video game recreation of a real city.

The main appeal of the presentation is that the main setting of Ximending is based on the real life city in Taipei. Every single shop, food stand and merchant are based on real locations and people working there at the time the game was being worked on. It is a digital recreation of a city worth visiting one day. Besides the coolness of the setting the NPCs are interesting. See, from a distance the civilians all have different colored silhouettes as their actual appearance is revealed when approaching them. The NPCs are almost faceless, meaning players can see faces but they are intentionally difficult to distinguish. Again, interesting. Yumo, her friends and other important characters are obviously identifiable. After all, it is not difficult to tell who Yumo resembles when battling in Youshanding. Hint: A hothead blonde from a popular 3D CG American Anime. The characters all look cool. the soundtrack, specifically the stages in Youshanding, are pretty cool. Speaking of Youshanding, while Ximending is a really cool and bustling city with various locations to check out and get lost in, it takes a little bit before reaching a cool stage of Youshanding. I would say the stages start becoming more fun to battle through starting from the first main boss’ building. From there the stages become more interesting despite looking similar to the first couple of stages and having a different color scheme. It helps add more visual appeal.

While I enjoyed the presentation there are a few a minor hiccups. Sometimes when the action gets really hectic expect some slowdown in frames per second. The game usually runs around 50-60 FPS but can drop to 30 or so at the aforementioned hectic occasions. Also during a side-quest battle Yumo randomly got stuck in the “T Pose”. Fortunately the game did not crash nor freeze. I quit the mission and Yumo could move normally again. I finished the mission on the second attempt and did not get another “T Pose” hiccup again.

On to the gameplay, which can be best described as part Yakuza, part Persona and part 3D Beat-em up. The Ximending part of the game has Yumo exploring the city and after more Youshanding Story Missions are completed visit food stands and help residents/visitors/merchants with side-quests. The quests range from finding people, purchasing items or rescuing them/retrieving items from a mini Youshanding rift. It is not much but it is cool. There are other small activities such as training missions and collecting hidden “Rainbow Cubes” (They have a cooler name in-game but I call them rainbow cubes). Think of the cubes as the Stars in 3D Mario games to grant access to main story rifts.

Yumo and Le Viada in battle

On to the Youshanding part of the game. As mentioned the combat is a 3D Beat-em up with Yumo and the Guardians battling waves of phantom beasts. Yumo can use Light, Heavy Attacks, timed dodges that temporarily slow time (Just Dodge), call her Guardian allies for Assist Attacks (Think of Assists in team fighting games like Marvel vs Capcom 2 or Skullgirls), unleash Special Attacks that differ based on the Guardian Yumo picked in the lower left corner of the screen, and lastly transform into Super Yumo when her Hair Meter is full. Not bad for a teenager who learned how to fight from watching Kung Fu movies.

The RPG elements come to play in Skill Points that are used to level up Yumo’s various combat stats to learn new combos, raise her attack, Just Dodge cooldown time, Super Yumo timer etc. Skill Points can also be used to power up the Guardians’ Assist Attacks. The Guardians can learn new attacks by eating their favorite snacks and participating in battles, followed by checking out their special friendship raising event. This unlocks a special training mission with the Guardian. Beat these to unlock new Assist Attacks.

The bestiary is not large so expect to see color swaps, different colored versions of the same enemy but stronger and with different moves) like in other JRPGs and beat-em ups. The game is not very long (the main story can be completed in 10-12 hours) so it makes sense. 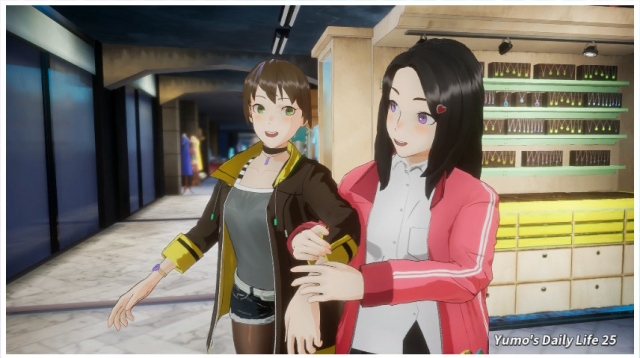 Yumo and Yusha on a date.

Yumo and Le Viada on a date.

While the yuri does not go far both Yusha and Le Viada have the hots for Yumo, one more more open than the other, yes. Yumo is an oblivious lead though.

Overall Dusk Diver has the potential to become a great series if more entries are ever made. As far as this game goes it is a simple but fun 3D beat-em up. The cast are neat and quirky, Ximending is fun to explore (Do not expect Yakuza or Persona levels of depth), the presentation is nice and the combat is simple but enjoyable (Do not expect Devil May Cry, God of War or Bayonetta levels of depth).

Visit the Dusk Diver PQube Homepage to check out where to buy the game physically. Otherwise the game is available on the Nintendo eShop, PS Store and Steam.