Note: Review is of the Nintendo Switch version

I am not a go kart racer/mascot racing game expert but I have played a fair share of them from the titans of the genre (Mario, Crash and Sega Trilogy) to the obscure (Looney Tunes and Toy Story). I believe I have enough experience to judge good racers to the not as good. Will the following racer be able to somehow match the titans in quality or become a meme for C.A.G like Garfield Kart or Hello Kitty Racing? Let us find out as we take a look at All-Star Fruit Racing, developed by 3DCoulds.IT and published by PQube. 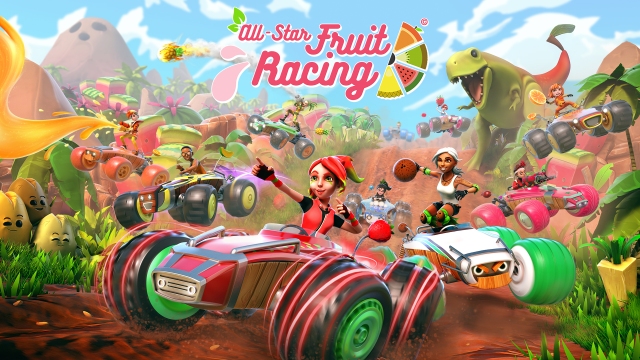 Description: A group of kids, mostly female, who look like they would fit in the Burger King Kids Club, aka 90’s kids, living on some fruity archipelago divided by four fruity islands compete in chaotic races.

There are over 20 playable racers. Some of them unlocked by winning Championships.

First up let us go over the best part of the game, the presentation. The racers, while looking like they are from the 90’s all have fruity motifs shown in their gear and default vehicles. With 22 racers there may be a few that grabs players’ fancy, unless the player is somehow put off by the designs. The four islands all look wonderful featuring over 20 cool tracks to race around. The fruitiness is very much felt even while speeding across the tracks and bombarding rivals with familiar but neat weapons. Only nitpick is that sometimes it is hard to discern where to go in a few tracks, specifically ones with multiple routes. It is not a big issue but has happened once or twice. The soundtrack does its job though unless the music and sound are tweaked in the menu the music is barely noticeable. Another minor nitpick that does not affect the game but is noticeable is the simplicity of certain animations and sounds, specifically when racers fall off the track or character sound bytes. When falling off the track racers are simply sent back to the track. There is no animation of the racer falling into water, lava, off a a high area etc. They are simply paused and resume the race. As for the sound bytes it is like most, if not all the ladies sound the same. The make the same taunt, victory or disappointment sound etc. Same goes for the few male racers.

Moving on to the Gameplay. As far as how ASFR compares to other racers famous and not as much I would say this one is somewhere in the middle, not terrible but not amazing. It does an adequate job. It is difficult to explain. While the controls are responsive, the cars are easy to handle and the game is as speedy as needed, they do not “feel” as tight as the well known titles. It feels like racing on ice most of the time. The tracks also have an uneven difficulty curve. Normally one would expect tracks to start off easy and ramp up in difficulty as players progress and unlock more cups and tracks. Here, though, the third track already felt like a major challenge. Speaking of driving the Drift mechanic works differently in ASFR. Unlike most where players can get extra speed while drifting and lose it if they stop drifting before meeting the boost requirement, ASFR has an ability that lets players store some boosts. It is a bit complicated to master but once you do it will make races less difficult. The Career Mode is not an “Easy, Medium or Hard” Difficulty. Do not expect the classic difficulty choices for all races. The Cups and racers have a set difficulty and players must adapt and manage.

Game Modes include Career (Where players unlock new racers and vehicle customization parts), Time Trial, Elimination/Battle, Single and Multiplayer Races. A unique addition is choosing between Juicer and Random Juicer though races in Career Mode automatically pick between the two per track (Same goes for number of laps). The difference between the two is the following:

Random Juicer is the classic “Item Roulette” where racers get random items when passing item blocks. In Juicer races, to use certain items racers must collect enough fruits to fill up their Juice Meters. Then they can mix them to create some of the weapons mentioned above or combine them all to unleash the racer’s super weapon. Each racer has their own unique weapon such as a coconut bazooka, giant rolling peach or cherry bombs. Be sure to check the video preview of the racer’s super weapon to know how and when to best use it.

Overall All-Star Fruit Racing is an above average racer that takes some time to get used to and is enjoyable afterward. The presentation looks pretty good for the most part but sounds average. The gameplay is solid and challenging in Career Mode. The game features enough modes and unique features and mechanics to deliver a good time to players willing to give it a chance.