This is another Yuri Visual Novel I followed closely since its inception. I mean, the two love interests are a shapeshifting snake woman and a wandering female monk. That alone was hype worthy. Now that the wait is over the question, as always, is whether it was worth it? Let us find out as we take a look at Mizuchi, by Aikasa Collective.

Length: 8-12 hours for all endings (Depends on reading speed)

Plot Summary: The protagonist is the daughter of a poor family thrown to the bottom of a snake pit for a crime she did not commit. As she fearfully awaited her impending doom a mysterious entity approached her. After a strange interrogation she is freed. To her surprise her “savior” was an intimidating yet alluring white serpent woman. Could this be the snake god she and the rest of her village worshiped? 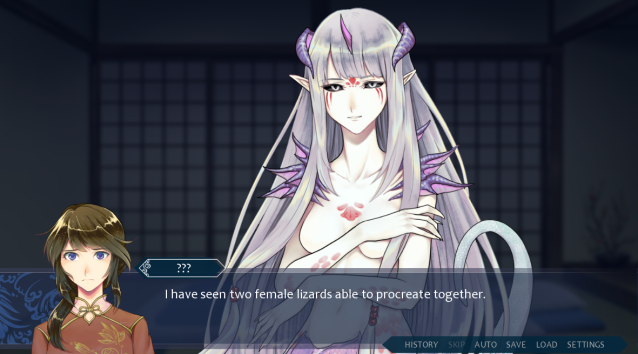 This moment right here let me know I would love this naga. Oh and those who wish to romance her first are advised to remember this moment.

This is a story inspired by (loosely based on) The Legend of the White Snake along with other Asian folktales. If I were to describe Mizuchi it would be about three women of different origins seeking to uncover their purpose for being through a series of discussions that often have them questioning their own understanding of life. Many topics are brought up such as Asian history, culture, colonization, human and bestial hierarchies and much more. This is all in an effort to answer three questions:

Through this story “plreaders” (play-read) will learn that no matter how many years of experience and wisdom someone may have they still do not know what it is they really want out of life. For our three heroines it is facing several personal struggles of the past, present and future to find the answers they seek. Heck, “plreaders” may find the answers and theories presented worth discussing outside of the story. The time period the story is set in also plays a role in the ladies’ development after all. 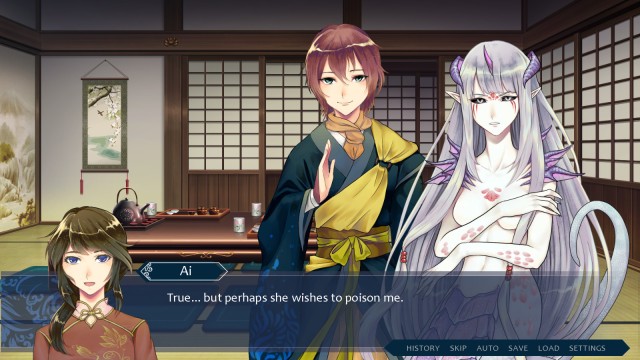 Life enhancing/changing discussions aside it is the story of a beautiful woman (Who does not believe this due to her poor upbringing) named “Linh” and her unexpected sexy weirdo housemates. First up is the main naga herself Ai. She is a know it all snake woman with her own sense of logic which is a mix of primal/bestial and societal. Because of this she is rather blunt and has a gung ho attitude. She is also a shapeshifter and possesses many other supernatural abilities. In short she is a magical smartass tsundere who cares about Linh. Second is the wandering monk Jinhai who has an interesting introduction. She is a calm and humble woman willing to listen and help everyone in need, including Linh. She also has a bit of a naughty side, by that I mean she likes to playfully tease Ai. The two have an…interesting relationship to say the least.

Let us return to Linh. She is a kind and adventurous woman willing to learn and grow despite raised in a somewhat backwoods village. Mind you dear readers, the village is this way for reasons explained in the aforementioned discussions. She is obviously not fond of the situation before and after being saved from the snake pit but learns to adapt over time, forming a dysfunctional but jolly new family with Ai and Jinhai. Still, there are a few things she misses of her village life. It is this along with various other experiences throughout her story she must bring forth with herself and when enough trust was earned between the three, her housemates, who, as mentioned, have their own issues to deal with related to Jinhai’s devotion to helping others and Ai seeking her ideal self. From their discussions and experiences the three find out that despite their vastly different origins they share common ground. One small thing to keep in mind. The story is told from Linh’s perspective throughout.

Jinhai is a great cook and (mostly) a vegetarian, much to Ai’s dismay (for obvious reasons).

Next up is the presentation. While a majority of the story is set in a big house, there are other locations, all beautifully drawn. The game features additional motions for the characters despite them being the traditional still images with different expressions. As shown above the CGs are excellent. A nice touch was giving Ai a slithering sound in her primary naga form. There are other nice sound effects too. The soundtrack is a pleasant one with each tune fitting the scene, sometimes stopping and resuming when the tone briefly changes or for quiet moments.

How to get the desired outcome is interesting in this game.

Normally I would not spend much time going over the gameplay because it is no different than most other Visual Novels. While it is no different in Mizuchi, multiple choice dialogue options once in a while, here there is a twist. From what I have gathered getting the desired outcome is not that simple. One would think getting the True Ends for Ai or Jinhai means favoring one over the other. Not exactly. While it does work for their Good Ends, the True Ends require additional balancing and timing. What I mean is choosing options that appeals to both while still favoring one. For example, to unlock Ai’s True End it is required to favor her while spending time with Jinhai too, just not more than Ai. It serves as both an Ending and Story significance as Linh prioritizes one over the other while slowly discovering what “love” is but not ignoring the other. In story she spends time with both as “plreaders” will notice some events not chosen in the first playthrough will be referenced such as Linh’s special lessons or a visit to the “forbidden” room. Main story events remain the same. referring to certain encounters later on, but how Linh gets there and what Ai and/or Jinhai does at that point in time depends on the choices made. There are 5 endings and which one “plreaders” get is based on who Linh prioritizes most…or not prioritizing either woman. Yet again it plays into the theme of “finding one’s self”.

The 15+ Patch content is beautiful. Very sexy of course but more so beautiful. Keep in mind that “love” is another topic of discussion. Fans of a certain “something, something”, it is there. Just gotta be patient and make the right choices, yes.

Overall Mizuchi was indeed worth the wait. It is an interesting and enthralling experience with a dash of Asian folklore and mythology. The main story is engaging with many engaging moments and some neat surprises (not just which form Ai will take next), touching and intense moments . The three leads are all wonderful and both romances develop very nicely. The presentation features simple and beautiful backgrounds, very nice CGs and a calm soundtrack. Definitely a fine addition to the fantasy section of one’s Yuri VN collection.