Looks like the last storyline we get to see animated will be Cham Jam’s road to an idol festival. Let’s see how it starts. 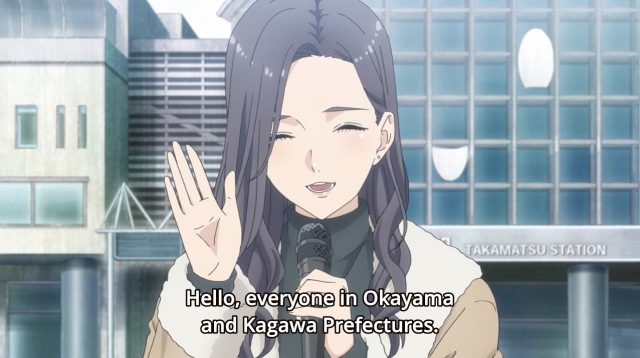 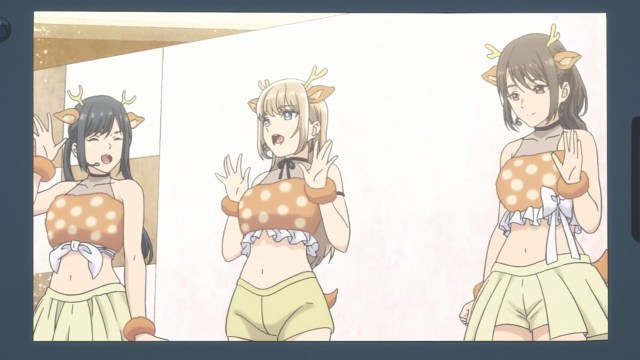 As mentioned in the intro the big story going in was Cham Jam invited to perform at an Idol Festival. The girls and their fans were excited and worried at the same time. The big group headlining the event was a trio called Maple Doll. The interesting part was the lead singer, Mei, was also the Center of Reo’s old group. 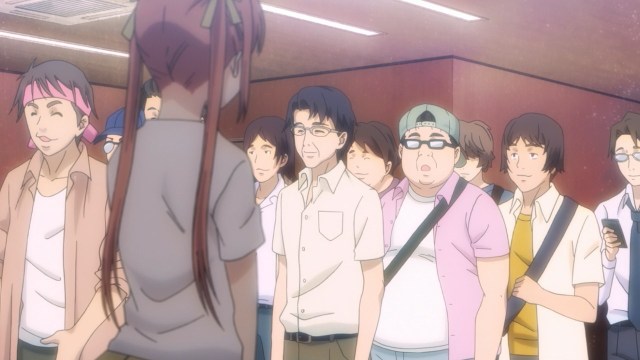 Seeing Mei on the poster reminded Kumasa of the the first time he saw Reo. Remember, she’s a lower rank member of the group similar to Maina in Cham Jam. Reo felt she was in Mei’s shadow back then and still felt that way in the present, hence her being a bit nervous while practicing for the festival. 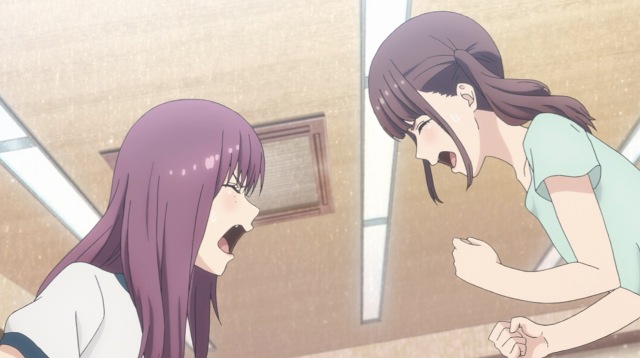 I said this a couple of times before. Aya and Yuka are the HimaSaku of the show.

A-Ya was the most intimidated by Maple Doll’s aura. She wanted everyone to train their butts off for the festival.Even Yuka had some difficulty keeping up with her routine. Fortunately the girls  found the right tempo to keep up. Most of them anyway. More on that later. 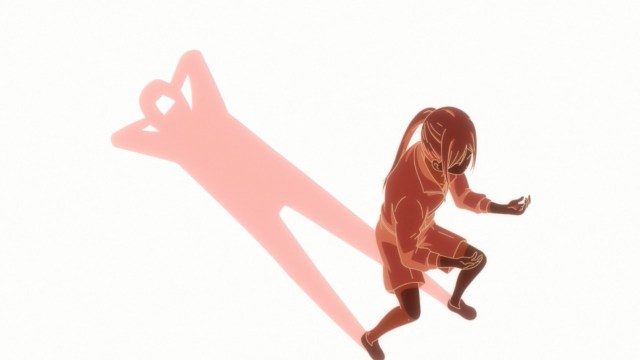 Let’s check in on our uber Maina stan heroine. Thanks to the training fans saw how pumped Cham Jam were for the festival. Eripiyo wanted to give Maina one of her best 5 second support speeches yet. Too bad that was the one time she got tongue tied. Poor dear was haunted by the slip up for a while. During lunch break she got a Cham Jam blog update. The group would make some kind of TV appearance together. This being Maina’s first potential TV appearance she was quite nervous to watch it alone lest something “unsanitary” happened. Neither Kumasu or Other Guy would let her come. 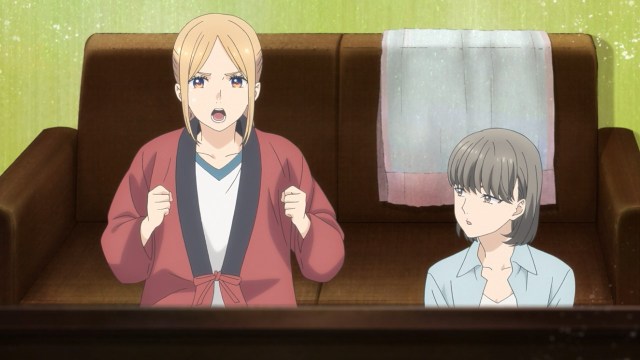 Fortunately her romance gossip loving coworker Miyu agreed to join her, mainly to find out who she liked. 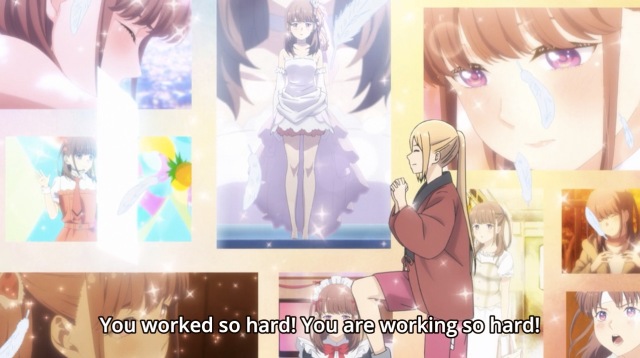 Little did Eripiyo know Maina worked as hard as she did to get closer to her. Anyway Miyu’s visit to Eripiyo’s went exactly as fans would expect. 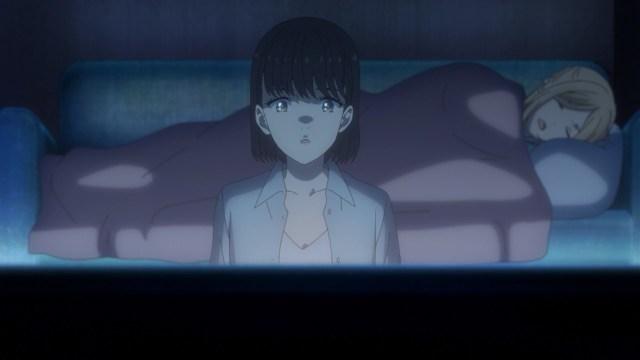 Miyu would never be the same.

But late that night she saw something that forever changed her life…So much so it opened Eripiyo’s eyes to how lucky she was. She wanted to share Maina’s greatness with everyone but didn’t know how. Other Guy recommended she use Twitter. Eripiyo only created an account because Maina liked it. 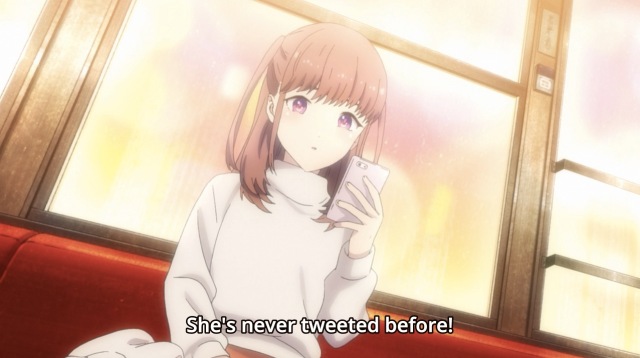 Maina checking Eripiyo’s tweets, because of course she secretly followed her on Twitter.

Moving ahead a bit remember the practice sessions? Maina was the only one having a hard time keeping up. She felt deflated when suddenly she read a barrage of Eripiyo’s “Why Maina is the greatest idol in the universe” tweets. Happiness restored.

There’s also Reo being nervous about meeting Mei again. She didn’t feel like she was ready to face her. Her not mentioning Cham Jam to watch out for didn’t help. We’ll see what happens when the two clash in the finale next time. Great stuff as always. Very sad the next episode will be the last, unless we miraculously get an S2.

No need to build up anticipation for the main event this time. 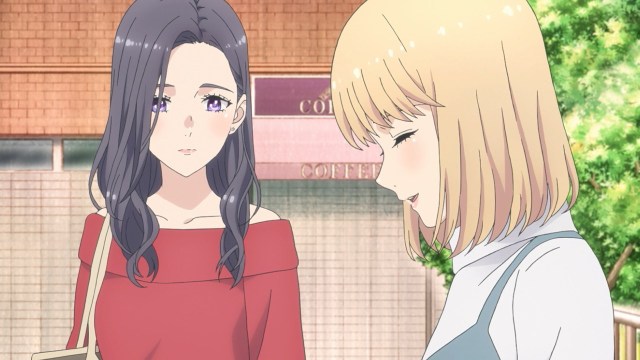 Yumeri called Maki for some reason (Wanting to be with her obviously). She saw a fan greet her and was like “You got a lot more popular after the idol ranking”. Bringing up the ranking reminded her of their little bet.

Yumeri: Oh yeah. I’m supposed to do whatever you say.

Maki: I see you remembered. Right then…I want you to surpass me.

Maki: Hmm. Then how about we stand side by side. It may be tough at the Festival so…let’s stand together Budokan. 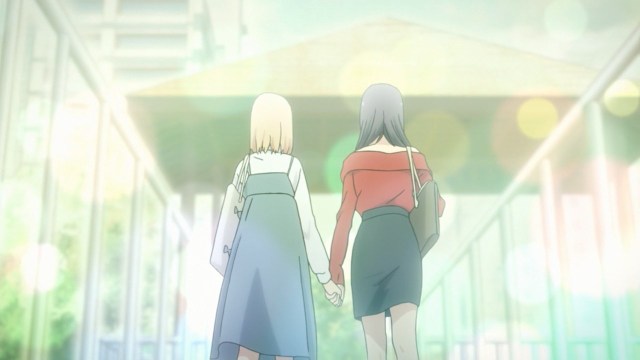 So it wasn’t as heart pounding as their previous moments together but still powerful. A promise to become equals on stage. Can you all imagine YumeMaki and Maina as the Center dominating the front row? The dream babeh. 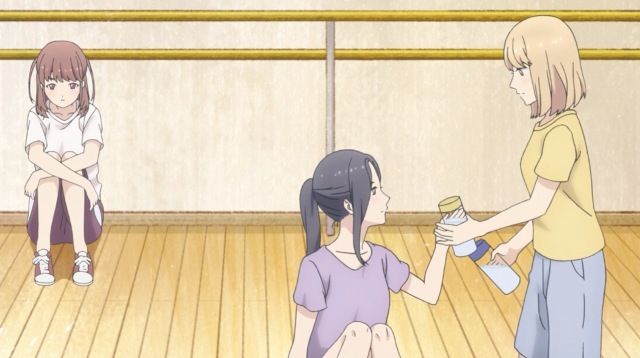 Not much else to add. The two were close to each other as always. #Glorious.

Yuri and Slice of Life are my anime passion.
View all posts by OG-Man →
This entry was posted in Episodic Anime posts and tagged Episode 11, If My Favorite Pop Idol Made It to the Budokan I Would Die, Oshi ga Budoukan Ittekuretara Shinu, OshiBudo. Bookmark the permalink.