When we last left our heroines they located the source of the Invisible Girl and Endless Solitude Rumors. In Meduka Maguca fashion things didn’t end well. We now continue with the aftermath of the latest Rumor.

These two remind of Linda/Underling and Warechu, the recurring troublemakers of an enemy organization. A more mainstream example is they’re the Team Rocker of Meduka Meguca. Thanks Macho Chikorita. I’m sure they’ll have another intimating moment like their debut but for right now every time they’re on screen “Warechu/Pirachu’s Theme” plays in my head.

The thing I liked most about Alina when she debuted was the fansubs translating her Engrish in Italian. Looks like it’s already been dropped. I am sad. Now Alina’s just another crazy antagonist. Nothing special to me. The last lunatic baddie I enjoyed watching was Dr Ver from Symphogear. He has yet to be surpassed for me. Anyway Alina’s mad her toys got smashed and went on a rampage summoning her Doodles. 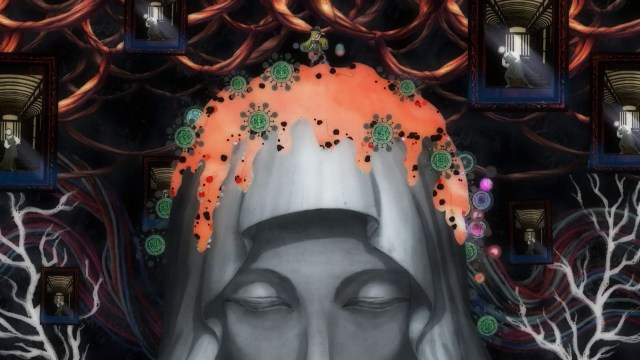 Admittedly her flesh colored Doodle blood paint is icky. Still doesn’t mean I care about her.

Felicia supercharged by a Power Link with Tsuruno.

I wonder if Felicia’s the only one who can Power Link with the others? I’ll get back to her in a bit.

Alina was about to orgasm when a bullet outta nowhere paused her menstruation. Mami was like “Stand down cuckoo for caca puffs”. Alina tried acting creepy and left.

So Mami’s a Wing of Magius member too. She drank the kool aid and was like “Patience. You’ll know why we’re doing what we do in due time. I owe it to the girls I cherish”. Could the Meduka and Sayaka be from the Magia Record timeline or another one? I don’t think they’re from the Meduka Meguca timeline, or maybe they are.

Oh and Mifuyu was there too. Yachiyo again tried calling out to her but no dice.

The mamas immediately took their new daughter home. Sana understandably still grieved over her lost love. Big Mama had an idea. They went mug shopping. It was a cute scene.

The mamas welcomed Baby Sana to the family. The word family pinched her inside. She went to her old home. She went to her room and saw a food tray. She hoped maybe, just maybe there’s still hope for her family.

Alas poor Sana was bitten hard by the truth bug. Still the same self absorbed garbage she remembered. Things were made worse hearing other families greeting their children. She’s like “Screw you guys. I’m going home to my new family”. She got the welcome she deserved there. 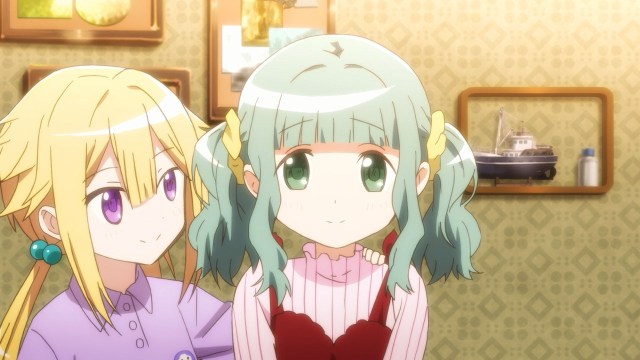 Felicia welcoming her baby sister. Felicia’s probably the youngest but look at how happy she is. She’s the first adopted so she’s the big sister.

Felicia started off as a Dollar Store Kyouko to me but now she’s Iroha and Yachiyo’s cute little firecracker. One of the best parts was her asking Yachiyo Mama to play more video games but Big Mama was like “Do the dishes first”. So cute.

After the ED we got a brief scene of The Wings of Magius being nice and stuff. Basic “The antagonists aren’t all bad” scene. The important thing to note was the not yet revealed members. Could they be other wings or the Magius themselves?

The episode ended with Sana giving Iroha Mama the first big clue she’d been searching for. Remember Ui and her two friends? Neru is another Wing of Magius.

Yuri and Slice of Life are my anime passion.
View all posts by OG-Man →
This entry was posted in Episodic Anime posts and tagged Episode 10, Magia Record, Puella Magi Madoka Magica. Bookmark the permalink.