When we last left our heroines the savior Misa-Nee had the brilliant idea of having Ao move in with Mira to avoid going abroad with her parents. Let’s see how it went. 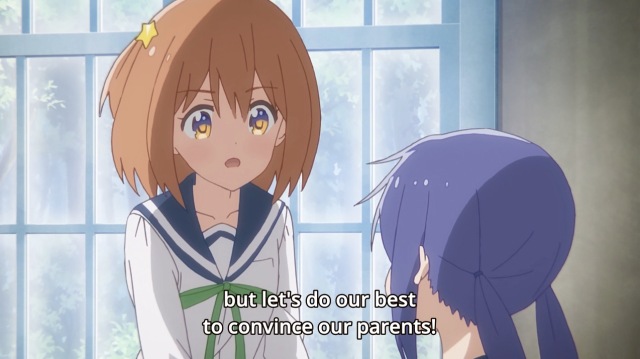 There lied the challenge. 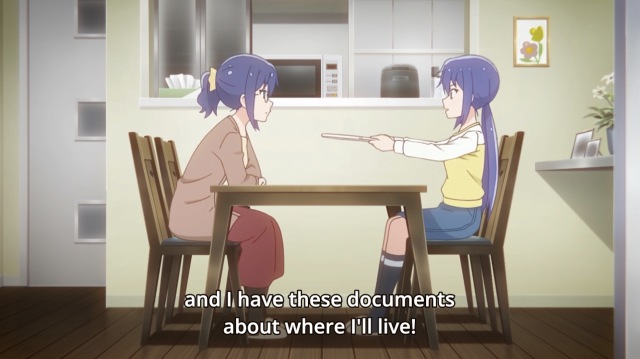 Mom was a tough cookie to crack, using the ever powerful “worried parents” card that’s super effective in loving families. Fortunately Ao had a trump card of her own, the “tantrum”, if you could call what she did a tantrum.

Mira seems beyond ready for her future spouse to move in with her.

Mira’s Mom was more accepting while at the same time equally as serious as Ao’s Mom. In the end the young couple were victorious. HUZZAH!

Ao and Mira promise to be more open with each other.

After school Ao and Mira visited Suzu to give her the good news and thank her for helping. She wasn’t her usual gay gay self. She hid her sadness with one of her patented Suzu flirts but she couldn’t hide the sadness of seeing her one true love moving soon. She’s devastated. Understandably so.

The Suzu and Sakura segment was great!

That evening Suzu waited anxiously for Misa-Nee to reply to her message. To her surprise she got a text from Sakura. She asked for her help baking Valentine’s sweets. Naturally Suzu’s like “WHO’S THE LUCKY GIRL!?” but Sakura said they’re friendship chocos for the club. Sakura had an epiphany during Suzu’s lecture.

Suzu tried flirting with Sakura to no avail. To her surprise the reason was Sakura could tell she wasn’t being true to herself. Yup. The tsundere ironically noticed Suzu hid her true feelings.

It was V-Day. Sakura’s day went quite well. She hoped Suzu’s did also. Speaking of Suzu…

I’d like to think they figured out a way to make a long distance relationship work.

Next up was a Monroe segment. To sum it up Monroe had a last minute reflection. With her time as president ending very soon she stopped to ask herself “Did I have fun as club president or was it all just to obtain experience for my future goals?” 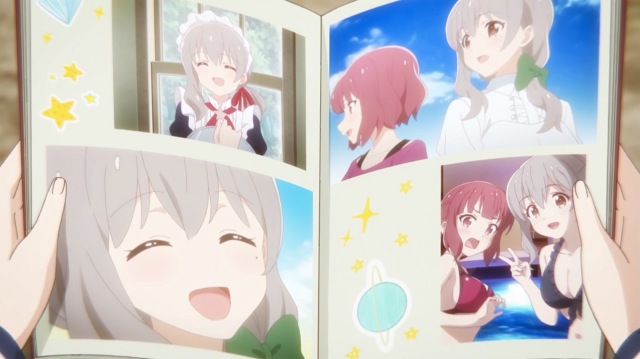 I’m still waiting for the Monroe and Sakura bikini fanart. I NEED THEM!

Thanks to the gang gifting her with a photo album with all of the best Monroe photos she noticed how happy she was in all of them and had a long overdue cry. Not an off-screen one like Sakura.

No sooner did Ao move in with Mira the two had a lovers’ quarrel. Mira wanted to help Ao unpack but Ao didn’t appreciate her going through her stuff.

You could have Suzu move in with you. I’m sure she’d be elated.

Thanks to Misa’s words of wisdom Ao knew what to do.

Viewers who saw the episode know why this was hilarious.

Now that they’re living together they have plenty of time to learn more about each other in preparation for their marriage in the near future.

A very important episode, this was. Tune in next time for the formal introduction of Sakura’s imouto and the grumpy girl.

Yuri and Slice of Life are my anime passion.
View all posts by OG-Man →
This entry was posted in Episodic Anime posts and tagged Asteroid in Love, Episode 9, Koisuru Asteroid. Bookmark the permalink.