Sports Festival and a very special day were covered in this episode. 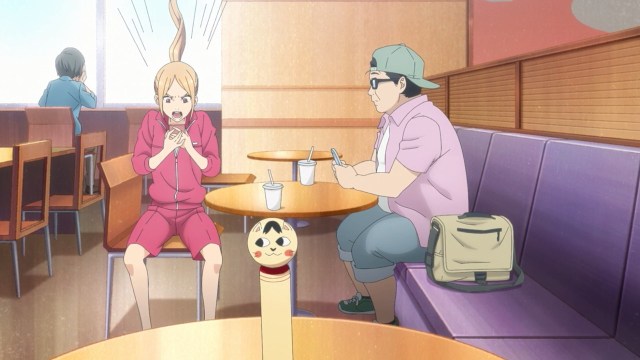 We began with a flashback but we’ll get to it later. First order of business was an upcoming election to determine the Cham Jam rankings. Eripiyo understandably gave up before the election even began.

She knew Maina always had the least number of fans in line for handshakes (2 in total though she mistakenly counts only herself. Whether on purpose or not I can’t say). Thus she began plans of rallying all 30000 of Maina’s fans across Japan (though Kumasu knew a lot of them were extra accounts created by Eripiyo herself). As part of the election the girls would compete in a sports festival. 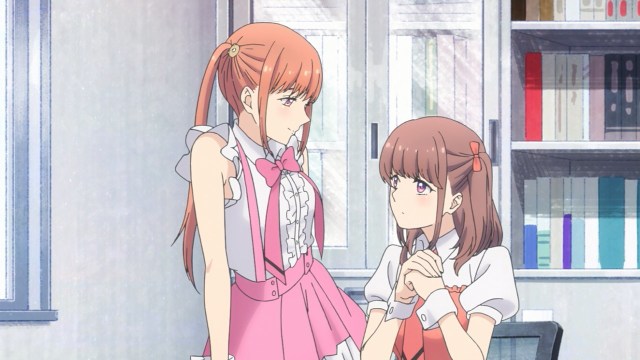 Don’t ask me why. Reo looked sexier than usual in this pose.

Cham Jam worried over the rankings and the festival as everyone but Sorane wasn’t very athletic. Maina worried the most. Reo came to her with words of encouragement. The exact words would be revealed later. 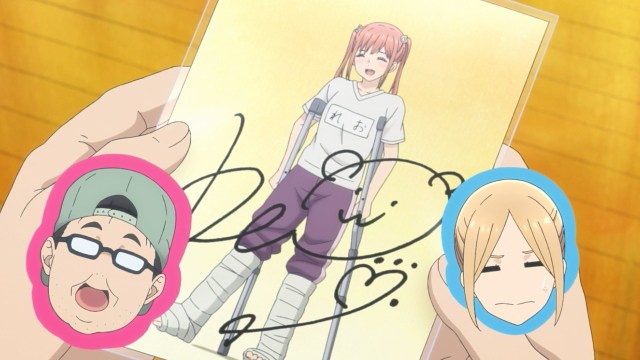 Speaking of Reo she injured both legs the year prior so she would referee the competition instead. 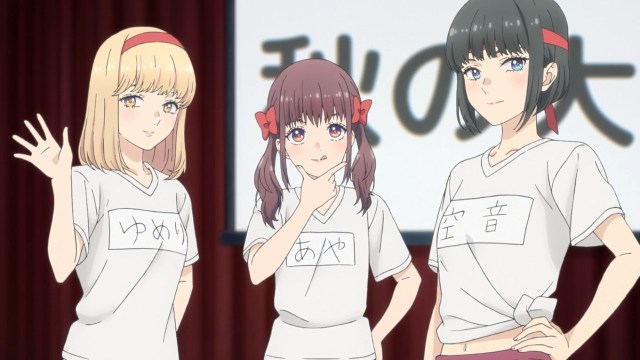 The festival had begun and the first event was a relay race. Aya, aka A-ya, made a mad dash to Yumeri but tripped. 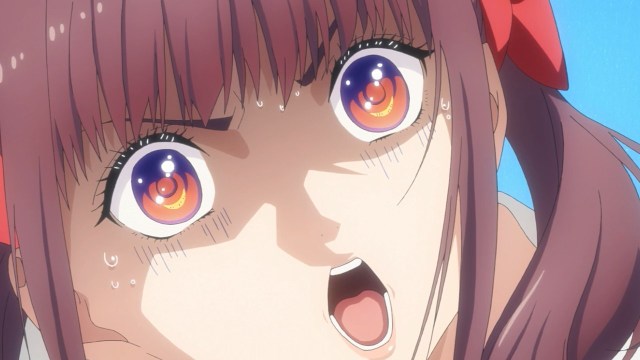 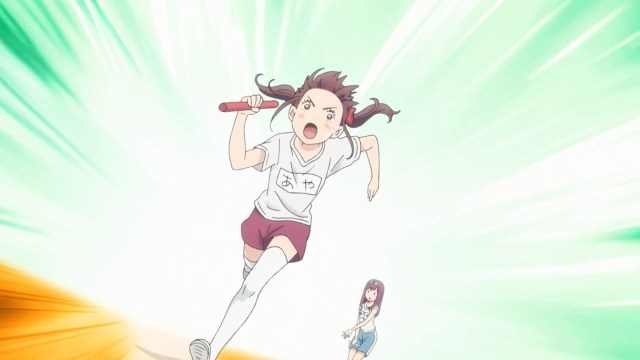 We got a hint on what kind of relationship between Aya and Yuka in Episode 2. Here we got a better idea.  My “nee-san from another okaa-san” Luzeri-chan described them as Himawari X Sakurako V2. That’s about right.

The batons were passed to Maina and Yumeri.

The two “strolled” their way to Maki and Sorane. Maina had a hard time keeping up when suddenly… 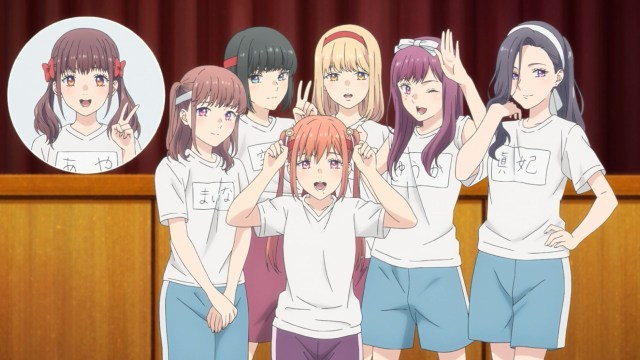 Sports Festival photo. A-ya was out of action after the relay race so Reo took her place.

So back to the flashback at the beginning. We got to see Reo and her old teammates. She was the least popular member. She did have one super loyal fan. Kumasu promised to help her become #1. Those words motivated Reo to work harder than before. So much so that after her old group disbanded she became the leader of Cham Jam. Kumasu would happily continue to ensure she stayed #1.

Reo’s words of encouragement to Maina came from her experience with Kumasu, “Believe in your fans and they will help you succeed”. As we can see they’re one step closer to fulfilling their destiny. 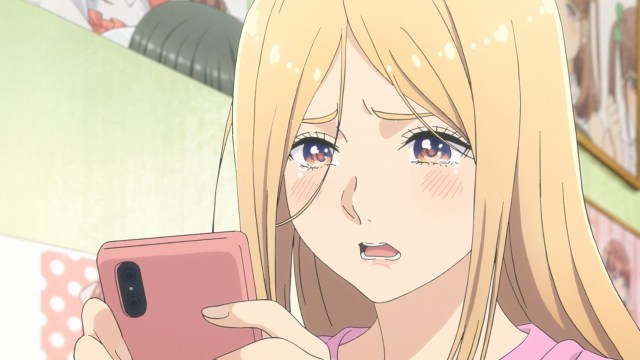 We already know this but Eripiyo’s gorgeous with her hair down.

I honestly don’t have much to add about the 2nd half of the episode. Reo’s birthday was coming up and Kumasu was in charge of organizing it. Eripiyo and Other Guy joined in because they’re his only friends, something that was heavily emphasized. The majority of the segment was Eripiyo working her butt off in multiple part-time jobs to make enough money to afford more Maina CDs because “1 CD = 1 vote”. It was meant to show how hard devoted idol stans worked to support their favorite idols. Nothing would stop Eripiyo from supporting her one true love…not even injury via wild boar. The random boar attack was so funny I needed to take a long break before continuing. 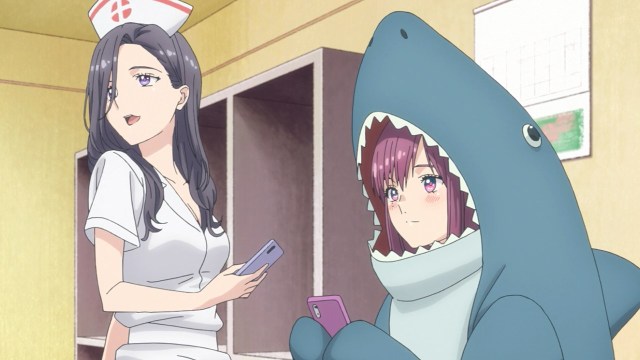 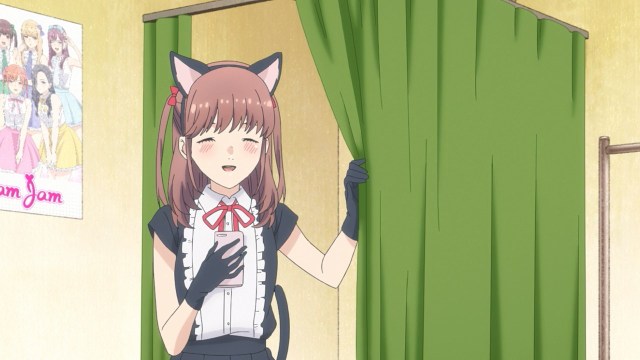 The birthday party went without a hitch and to the surprise of everyone Maina made ranked 3rd! Good for her!

Yumeri imagining herself at the next fashion show. #2 sexiest right here.

Let’s rewind back to everyone worrying worrying the rankings. Yumeri thought about what it would mean to rank #1. For a moment she relished it…until she remembered “the promise”. She was like “If I rank in the Top 3 with Sorane and Reo what will happen to my promise of walking down the runway with Maki?”

Maki: No worries Yume. I’m sure your fans will help you rank up.

Yumeri (That’s not what I’m worrying about).

Back here again. As Maina got her surprise love boost Yumeri noticed Sorane and Maki in front of them and was like (I want to do my best but if I run hard and pass the baton to Sorane early Maki won’t stand a chance). Unfortunately, as Maki told her in Episode 2, “I’m always watching you”.

Maki: You should give it your all in the rankings Yume.

I have a feeling these two will be the end of me.

Maki: …How about this. The loser has to do whatever the winner says. That enough motivation for you?

Yumeri’s team won the festival. If the preview was any indication expect her to have something big planned for Maki next time.

My body is ready.

Ah yes. This too is very important.

Yuri and Slice of Life are my anime passion.
View all posts by OG-Man →
This entry was posted in Episodic Anime posts and tagged Episode 4, If My Favorite Pop Idol Made It to the Budokan I Would Die, Oshi ga Budoukan Ittekuretara Shinu, OshiBudo. Bookmark the permalink.