At first I was thinking of having my 400th anime review be a special show but because a rumored second season was yet to be confirmed as of the day of this writing I scrapped the idea. Let us instead talk about the next show I finished watching, Houkago Saikoro Club. An anime about a Girls’ Club who enjoy playing board games among others. 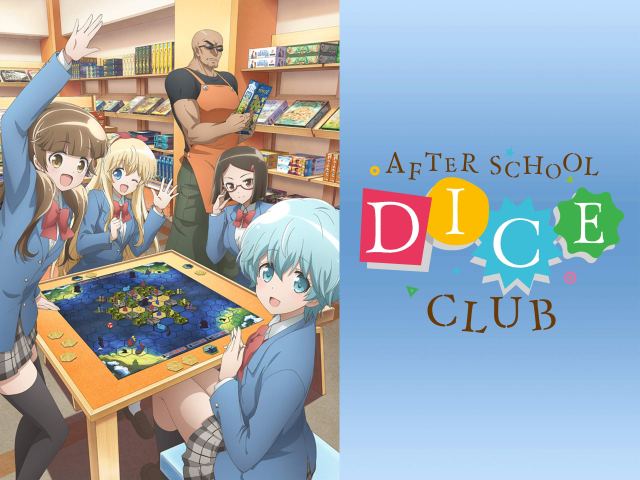 Plot Summary: Miki is a loner who has difficulty opening up and socializing with others. She also does not know how to have fun (This will make more sense when viewers see her flashback). That all changed when she met Aya near the river after an unusual circumstance. They then joined the class representative Midori (also after an unusual circumstance) to form a trio (later quartet) of friends playing board games during their free time. 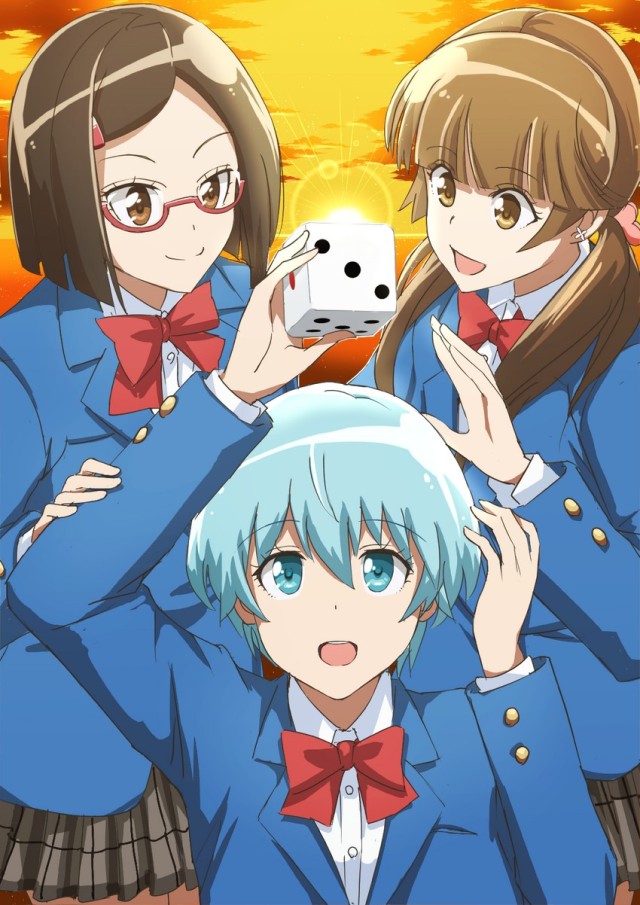 Put simply HSC is a chill show about a group of girls who play board games, dice games, card games or a mix of the three as viewers learn the rules, get a demonstration of how it is played and generally have a good time watching cute girls playing games.As mentioned in the plot summary Miki is shy but thanks to her friends slowly starts opening up to others. Although she is not very assertive at first she is definitely very perceptive, noticing many things quicker than others. Her specialty are memory games. Aya is the genki of the group, always full of energy. Her nearly limitless energy and enthusiasm, devotion to the team and eagerness to play every game presented makes her a very important member. Midori was initially stern but quickly opened up to her soon to be friends. She keeps her team under control but is at times responsible/dedicated to a fault. While more social than Miki she too has some trouble opening up when it comes to something related to her character arc. The fourth girl occasionally pops up in some episodes until officially joining the club in the third quarter. Her character arc shares similarities to Midori’s and Aya’s, more so the former.

When not playing games the girls are either doing cute things or dealing with their character arcs. Some more than others. Without giving anything away, Miki works hard to slowly come out of her shell. Midori has a life goal but must face many obstacles to achieve it. It is related to board games. Once her life goal is revealed Midori suddenly becomes the central protagonist. Miki eventually gets the spotlight back on her. Aya has the least problems of the three but does face a strong obstacle in the fourth quarter of the show. 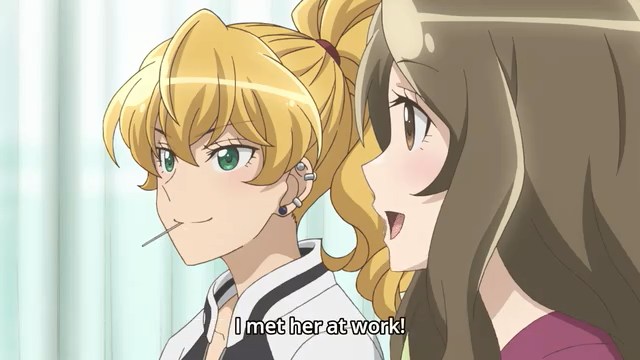 Side-characters are hit and miss. Most of them are likable, especially the above two, but some not so much, specifically two male students and one adult. I guess to me that is three characters I did not like. It can be different for others. Because of them my least liked episodes were 2 and 10 (though 10 had a wonderful moment between Midori and fourth girl). The male students are not crappy people by any means. They simply contributed nothing to the show, IN MY OPINION. The seitokaichou is cool though. 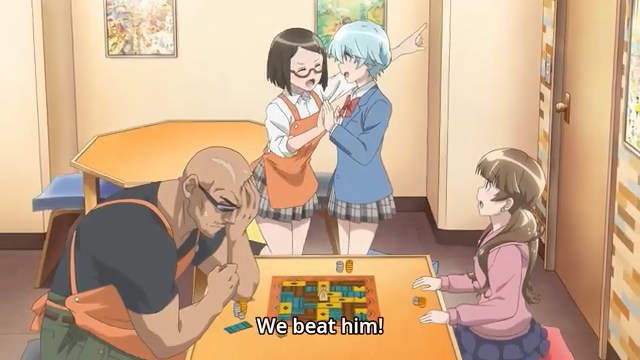 The first game of the show.

On to the games. As mentioned the girls, along with a fourth/fifth player or more, play board games, card games, dice games or a combination of the three. Most of the games are of European origin, mainly Germany. Other countries are represented too of course. Midori is usually the one explaining the rules. She loves them and works at a game shop. We then see the game being played. Whether the viewer enjoys seeing the girls depends on two things:

In cases like this I feel the latter is more important because the competition can be fun but if the viewer does not care for the competitors then it is just as bad as not enjoying the competition. I can attest from personal experience that while board/dice/card games are more fun played than watched there can be excitement for spectators depending on how competitive the game is. This being an iyashikei (I think so) series there is usually nothing on the line though there were a few games with stakes. I did not recognize any of the featured games but the girls’ enthusiasm more than made them fun to watch. I imagine another goal of the show was showing that although board games are niche they still have an audience and are fun to play. Mission accomplished.

The presentation is nice. Not much to say. The best parts are in the OP song, which is excellent btw. Other than that it is solid. The soundtrack is chill. As mentioned the OP is great and the ED is quite nice.

On the yuri side there is not much. However, one thing I will say is to keep a close eye on Midori. Her and two ladies I already mentioned. We all know the truth ladies.

Overall Houkago Saikoro Club is a fun and relaxing show with a few hiccups that can be overlooked. Everything about it is super chill and I quite liked it for that reason. The main girls are all wonderful and the side-characters, though some nuisances, are more hit than miss. The games themselves all look fun to play. Whether viewers enjoy seeing everyone playing depends on their investment in the games and players.

Yuri and Slice of Life are my anime passion.
View all posts by OG-Man →
This entry was posted in G-Views and tagged After School Dice Club, Board Games, Card Games, Dice Games, Houkago Saikoro Club, Iyashikei, school life, Slice of Life. Bookmark the permalink.