To commemorate my recent acquisition of a Nintendo Switch I figured what better game to review as the first entry than one about cute alien girls shooting giant Earth girls with “Happy Bullets”? That is what we are here to talk about as we take a look at Gun Gun Pixies.

WARNING!: This is a fanservice heavy game similar to the Senran Kagura franchise, the Gal*Gun series or Akiba Strip (I know GG and Akiba are het. Just using them as examples of other ecchi games) for example. Players who dislike such games are advised to move along.

Plot Summary: Planet Pandemo is suffering a population crisis. Individuality is revered but at the cost of social interaction. Thus Pixie Team, Bee-Tan and Kame-Pon, were sent to a girls’ dormitory on Earth to study their behavior in hopes of helping the people of their home planet. Just one little itsy-bitsy problem (or advantage depending on who one asks), Earthlings are gigantic compared to Pandemonians.

Three of the girls Pixie Team interact with from left to right: Kira, Amayo and Misa.

The story is a fun and fluffy romp with some serious moments here and there. Little of it is game changing but the personal obstacles the girls and even pixies must overcome are understandable and relatable. They range from health concerns, family issues and social anxiety among other things. There are no jaw dropping twists but it is still fun watching events unfold as players help the pixies find answers. The main cast of girls and some surprise guests are all likable from the dormitory tenants to our lead duo. They all have their fun and cute quirks. Of course they are all cute and/or sexy too as is to be expected from a Idea Factory and Compile Heart title, who, like Kenichiro Takaki’s “Ecchiverse” as I like to call it, is full of lovely ladies who are “ecchi” on the outside but deal with very real issues on the inside. Good stuff for people who do not prematurely judge the “fanservicey” nature of the companies’ games.

The presentation is what is to be expected from an IF and CH title. The visual novel style cutscene art are nice to look at with the girls breathing and bouncing their chest (If they are big enough) once when they are about to speak. There is no Dual-Audio this time, which makes sense for a game like this with some scenes of the girls moaning. Then again English voice actors in some ecchi anime dubs are required to moan…Anyway it is no big deal as the Japanese seiyu do a great job. The in-game graphics are the standard IF/CH PS2-PS3 style anime game style. It gets the job done and as usual for their game catalogue the girls are nice to look at. The soundtrack is solid. Not the best IF/CH offering but it features nice tunes to listen to and the serious/upbeat tunes get the job done. 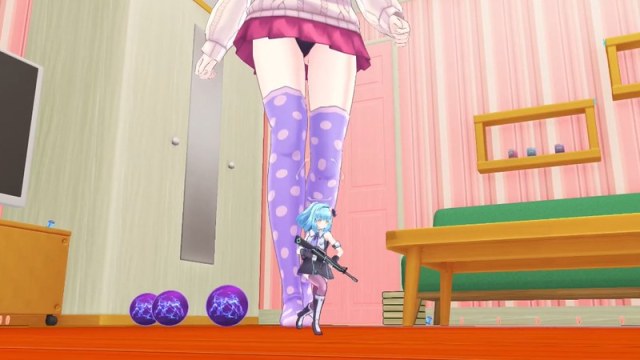 As mentioned above the Earth girls tower over our lovable Pandemonian soldiers.

Next up is the gameplay. GGP is a third person shooter with some platforming and stealth mechanics. As either Bee-Tan or Kame-Pon, whose only differences are visual as they play virtually identical despite BT wielding a pistol and KP a rifle, players will run around, explore, sneak and of course shoot enemies or the giant cuties on route to completing missions that can go from 10-45 minutes on the first playthrough. Said missions range from shooting the girls with Happy Bullets till they give the necessary information, destroy all enemies, investigate certain items/search points and reach certain parts of a room. The game is split into 8 chapters, each with 3 missions, the last one being a boss battle with a sexy bonus stage afterward.

While crouching players get a good view of BT or KP’s booties. Here BT is wearing the chocolate lingerie (surprisingly available from the start in the Customize Menu).

There are three rooms (levels) in total to venture through and while that is a small number the gameplay finds ways to keep repeated exploration enjoyable. While exploring players will come across Picoins (bronze, silver and gold) to spend on gun upgrades (more ammo and firepower) unlocked costumes or lingerie (some unlocked by playing the game and others by finding panties on the floor or costumes hidden somewhere in the rooms), blue bullet packs and power points (green circles) where players can recover lost health or fire charged shots. Keep in mind for power points that players must stand still in the center of the circle to fire charged shots or prompt the “Recover” action. Oh and there are warp points disguised as electrical outlets/LAN ports.

As mentioned before the game is a shooter with some platforming and stealth. Let us first go over the stealth. It is an intergalactic law for aliens not to reveal their true identities to other beings, thus our little heroines must make sure to not be seen or heard by the giants. The giants have a red sensory area the pixies must dodge to avoid detection. Running and shooting near them will trigger their hearing though this is less difficult to avoid than being seen. Have either sight or hearing meter fill up and players fail the mission. Should players be in danger of detection they can run for cover, crouch or pose as action figures to avoid detection. Just be careful not to get stomped or attacked by other threats. Our heroines get KO’ed after taking four hits.

Pixie Team will face other threats besides the giant cuties.

Besides the giant cuties other alien threats will appear to cause trouble for Pixie Team. Luckily they come prepared. Both come equipped with tri-shot and single big shot firearms that can be powered up in the store. The game uses Manual Aiming so pulling off direct hits can be tricky, mainly due to aiming on a controller. This is probably less difficult on the PC port. Oh and Pixie Team can stomp the aforementioned other enemies. It took me till near the end of the game to figure that out.

Now on to the part that will take the most getting used to, the platforming and camera. See, the pixies run and dash. They do not walk. Reason I say this is because the jumping is a bit clunky. Not to say it is hard to get around the rooms but the controls were not made for precise platforming. This will be most noticeable when traversing the higher parts of rooms walking on LED TVs, upper shelves or items hung on walls. The camera is from the N64/PS1 era of consoles where the 3D platforming camera were in its infancy, meaning expect to run into some trouble. Luckily nowhere near as many as I heard from reviewers early on. The game got patched by the time I played it so the only time I really noticed the camera being a bit of an issue was behind drawers and closets or in tight corners in the lower or upper parts of the room. Said upper corners had the camera zooming into firs person making it a bit difficult to jump. Let me put it this way, thank goodness this game does not have fall damage. The aforementioned warp pads and a new item make climbing back up easier but the latter is made available near the penultimate chapter so warp pads it is for the most part.

After completing the first chapter Free Play becomes available where players can replay chapters, take on more challenging extra missions and relish the unlocked sexy Bonus Stages. There are other unlockables after beating the game. There are 6 total endings. 4 of them depend on which girl players “investigated” more than other. 1 hidden route can be accessed in Chapter 5 (How to do so is easily hinted at if players look hard enough) and the 6th ending is determined by poor ratings in all Boss Fights (so a bad end). Speaking of Boss Fights.

Before getting to the main event let us briefly go over Boss Battles. For various reasons the third mission of every chapter will have the giant cuties grow restless and it is up to Pixie Team to calm them down. Normally when firing Happy Bullets at the girls there are four specific spots to aim for (upper body, lower body, head and butt). In Boss Battles however, it is no holds barred. every body part can be targeted…EVERY. BODY. PART. The battles will act like 3D shoot-em ups with the giants emanating a barrage of “gloom bullets”, killer glass hearts, sweat glands/tears at our little heroines. Some bosses use similar “fighting styles” (expect three pole fights) but they become a little harder the second or third time around. 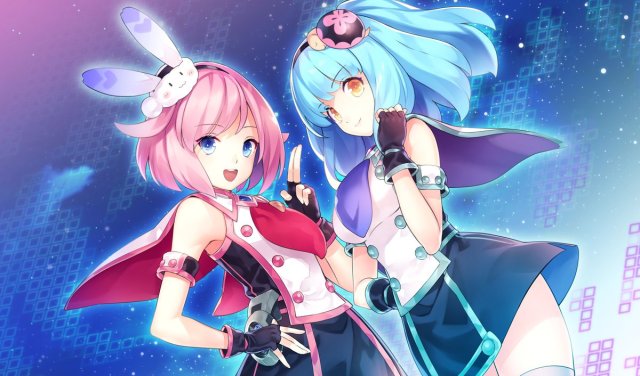 Now for the main attraction. Bee-Tan is a “Hunter” Class lesbian who loves cute girls and relishes the opportunity to express this and “study” them, if you know what I mean. But like other prolific “Hunters” such as Eruna Ichinomiya (Mikagura Gakuen Kumikyoku) and Dancho Arthur (Million Arthur anime) Bee-Tan’s heart belongs to one special girl, Kame-Pon whom she is determined to win her love. Kame-Pon. That and when things get serious she, like her fellow Hunters, is one of the most dependable people around. Kame-Pon meanwhile is the serious one of the two, not tolerating BT’s naughtiness but not leaving her side either. Keep this in mind as the story progresses. The giants have their own yuri traits and moments as well.

Overall Gun Gun Pixies has some flaws like every other game but more importantly is a fun and gay romp. The cast are enjoyable, the presentation and gameplay are solid, Pixie Team are great and there is plenty of ecchi and yuri goodness for fans of the combo.

PS: Two more giant cuties appears in Chapter. One of them is “Almighty” (BROTHER!).