Let’s quickly check out the other Fall anime I’m watching but have no plans on covering weekly.

Let’s start with an enjoyable but least cool of the three (mainly because of Episode 2). Put simply it’s about a trio (soon to be quartet) of girls coming together to form a club who play board games, card games, dice games and other tabletop games. The presentation while playing games is fun and the main three girls are neat. We have Miki (cocoa hair) the genki, Aya (aqua blue) the shy girl slowly opening up thanks to her friends and Midori (dark chocolate) the sexy incho who started off as a tsundere but quickly became the game mistress. After all, she works in a board game shop with her intimidating but cool manager seen above. The 2nd episode wasn’t as cool because, while the guy who liked Miki was innocent, het rom-com stuff is not what we’re here for. Hopefully one of my buddies’ predictions of each episode featuring different people to play games with comes true. We know the anime is co-ed and that’s fine so long as it doesn’t devolve into a het rom-com.

Readers can see why I’m hesitant to cover the show weekly. Despite the co-ed cast I still humbly request mange readers and people who looked up info on the series online to not spoil anything, 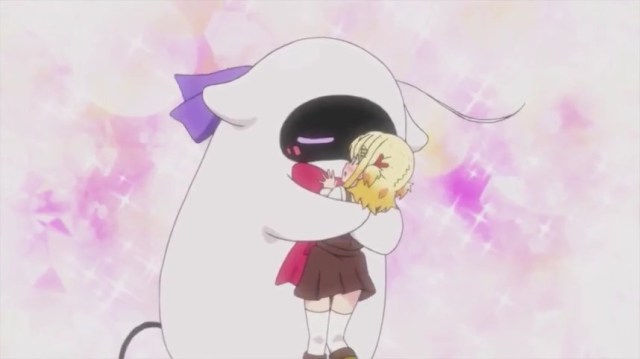 Next up is Null Peta. It’s a show about child genius Null reviving her deceased sister Peta in a cute Baymax like fluffy robo-body. The show so far has a Dexter’s Laboratory style of humor with Null being super intelligent but bratty and Peta the caring older sister inside a cute but extremely powerful/dangerous robot body.

Why did Null revive Peta inside a weapon of mass destruction? Because comedy.

Despite their shenanigans the sisters love each other very much.

Only nitpick with the show are the episodes being short. It does make sense as Dexter’s Laboratory episodes were also short and Null Peta chapters don’t have enough material for 20+ minute episodes unless they combined two to three chapters per episode. 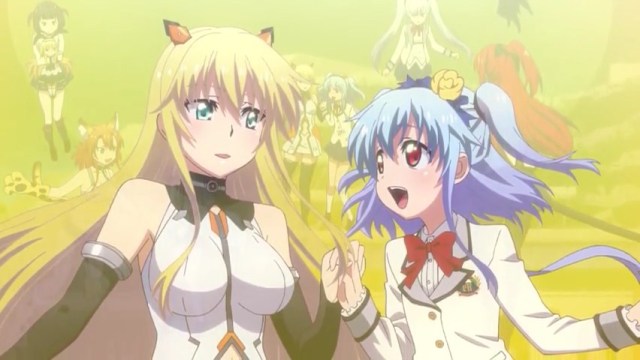 Z/X: Code Reunion (Pronounced Zex) is currently the coolest of the three “side-anime” I’m watching. It’s a show about humans and Z/X (invaders from another dimension) joining forces to combat a greater threat as seen in the first two episodes. The show initially reminded me of a PG Valkyrie Drive without the steamy content. The whole “girls with some illness lured to a school that’s actually a military academy” part is similar along with the humans and Z/X bound together. The main couple who pretty much got engaged in the first two episodes are Rigel the sexy Z/X and Azumi her adorable fiancee. Azumi is more open with her love whereas Rigel is all serious and tsundere on the outside but cares for her just as much deep down.

Azumi and her team.

When an alien invader attacked the school Azumi, Rigel and four other girls (along with their Z/X) somehow found the school’s super secret combat facility and the five were conveniently partnered with five Z/X of the five Realms (Blue, Green, Red, Black and White). Their hair colors were another hint. Azumi’s teammates have their own Z/X but they aren’t all humanoid. Two of them are a living katana (That or the Z/X lives inside of the sword) and a doll after all. There are most likely other potential couples but for now Rigel X Azumi are the main draw.

I’ll talk about those shows again in the near future after more plot developments.