Here we are with another anime with Re: in its title following the tradition of titles such as Re:Zero, Re:Life, Re:Creators, The Repo Man etc. This time it is another idol show but do not underestimate this little underrated powerhouse. Find out what I mean as we take a look at Re:Stage! Dream Days♪.

Plot Summary: Mana Shikimiya enters a new school looking for a fresh start after an uncomfortable past event. There she meets Sayu Tsukisaka and the leader of what can be best described as a cultural dance club Mizuha Ichikishima. They put on a demonstration of what they do and it reminded her of idols, something she wanted to forget. However, thanks to Sayu’s charming wiles she is convinced to try again. Together they find other girls and form a group to compete and win the Prism Stage idol tournament.

Before we get to the main draw of the show let us briefly go over the setup. One the surface it sounds like yet another idol anime, which it is. Fortunately there is no school being threatened of shutting down this time. That should be Love Live’s thing. Bad idea when other idol anime use that as a setup. It is all basic idol stuff, girls come together, some are more difficult to recruit than others, they form a group with a name and stuff, work together to be the best, meet rivals, grow closer, etc. Cool. Having said all that what makes Re:Stage special is the strong focus on the relationships between the three established couples. The humor revolves around their personalities and interactions with other equally amusing groups, besides the super elite group to beat. Like every comedy in existence the enjoyment highly depends on the viewers’ sense of humor and i a cute girl centered idol anime how much the viewer enjoys Girls’ Club (Cute Girls Doing Cute Things) comedies. Each girl has their own personal obstacles to overcome and with the help of their friends, especially their soul mates, they pull through.

The neat thing is that unlike other shows where it takes time before some of the tougher to recruit members join, here they are one and done. No 2-3 Parters here because the writers know that is not what the people came to see. Having said that each girl have familiar yet interesting enough obstacles to overcome.

The presentation and soundtrack are extra colorful. I like cute and colorful anime like this one. The Insert Songs are cute too. 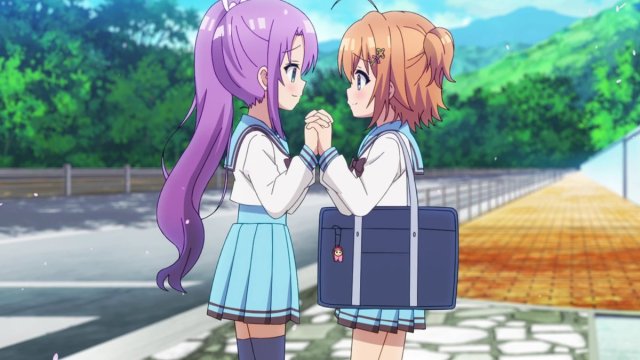 Now let us go over the main reason readers of this blog might consider checking this show out, the fluffy gay couples, starting with the main duo of Mana X Sayu. Mana is the heart of the group and an adorably calm girl. After meeting Sayu her admiration and love for her grows stronger with each passing day. Sayu is serious but has some small tsundere traits (toward people other than Mana) and a has the token cutie fang. She has an interesting hobby that provides some of the show’s best moments. It can be argued her love for Mana is even greater. Think of these two as idol Saki X Nodoka. 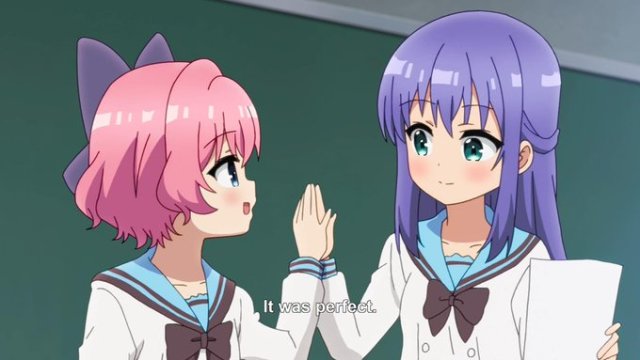 Next up we have Kae and Kasumi. Kae is a quiet super genius with the token cute monotone face and voice. She is a distant cousin of Tony Stark’s. Kasumi is the athletic/cool chick member of the group. The Kasumi recruitment episode is one of my favorites. They both have nicknames among their inner circles, Dark Shadow Princess and Thousand Kill Angel respectively, which they use to lovingly address each other. 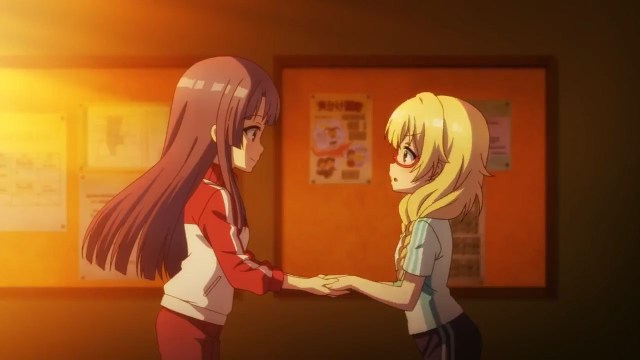 Mizuha and Minori are the oldest members of the group and hardest to recruit (Still only requires one episode to get them on board). Mizuha is the chill member of the group. Despite her calm demeanor she has many ways of getting what she needs. Midori (Mii) is basically blonde Nico Yazawa who ends most of her sentences with “Mii”. Her voice is delightfully scrunchy, Mii.

There are other side-couples but these three are the main draw. What I like most about this is that unlike other idol anime who favor a “ship war” setup (Many girls can be shipped with each other) this one establishes the couples and they stick together to till the end. There is no “cheating” to be found here. I know many yuri fans enjoy going ham shipping girls like crazy but I personally prefer when there are couples of 2 (sometimes 3) and they never change.

Overall I consider Re:Stage! Dream Days♪ the second hidden gem of 2019. Let me put it this way, while I personally enjoyed the Ongaku Shoujo TV anime adaptation I know others were not as impressed. I truly believe this one is more fun and easier to enjoy so if anyone found this review convincing then by all means give it a try, so long as readers are cool with fluffy idol  x Girls’ Club style comedies and fluffy gayness.

Yuri and Slice of Life are my anime passion.
View all posts by OG-Man →
This entry was posted in G-Views and tagged comedy, idols, music, Re:Stage Dream Days♪, school life, Slice of Life, Yuri. Bookmark the permalink.