For this G-View I will split it into two parts. Part 1 is the spoiler free G-View right here. Part 2 is of course the spoiler post discussing a certain something.

Let us get to it as we talk about the 5th (and presumably) final season of Senki Zesshou Symphogear, Symphogear XV.

My reviews of the previous 4 seasons:

Full Title: Senki Zesshō Symphogear XV: Create a history, with the light God could not know

No plot summary this time. Put simply it is the culmination of 7 years of the Symphogear series. Everything that made the show beloved by fans is here amplified to otherworldly levels of awesomeness. 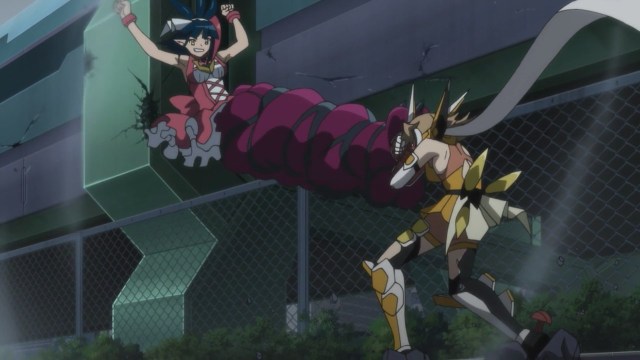 Hibiki vs Milaarc of Noble Red.

The fights are more mega hype worthy and ridiculously over the top than ever.

The henshin sequences are the best the series has had to date. The most interesting one being Kirika’s.

The animation quality is at peak quality throughout. It is the most visually stimulating season to date. The soundtrack, as always, is excellent.

The character development and drama is at an all time high for some of the characters, specifically the latest “SLAG” of the series, Noble Red, and Tsubasa. They are connected so we will talk about them simultaneously. Like the description says Noble Red, consisting of Vanessa, Milaarc and Elza, are the latest group of cute and sexy ladies opposing our cute and sexy heroines and the rest of S.O.N.G. Without giving anything away their motivation is easy to understand. However, their methods, specifically one member in particular, will be seen as quite extreme and polarizing. While I ultimately understood why she went the extra mile compared to her beloved allies and she got the desired reaction from fans, I can understand some viewers not “feeling” her shall we say.

Tsubasa has had it really rough this season.

The one affected the most by the aforementioned Noble Red member’s polarizing actions was Tsubasa. Again without giving anything away it is a continuation of her deliberating her life purpose and family issues. Said actions affected her so hard it took her off her game big time. Once viewers see what happened it will more than make sense why she acts out of character for most of the season. Some of the series’ traditional super violent scenes involve Tsubasa. She was tested more than ever this time around. It is possible some viewers will not find as much enjoyment seeing what she goes through.

Chris fans will be happy to know she had the least personal luggage to deal with this season, which was a welcome surprise considering it looked like her suffering would be eternal. Said end of suffering has a big payoff at one point for viewers who paid attention to her journey throughout the series. Her development in contrast to Tsubasa’s has more to do with having an epiphany about her future.

ShiraKiri are as precious as ever.

ShiraKiri too have overcome their arduous past and serve as the central comedy relief of the season being adorable lovebirds as always and their reactions to stuff that is happening, especially Kirika. Like Chris them having overcome their past turmoil plays a big role at certain points. 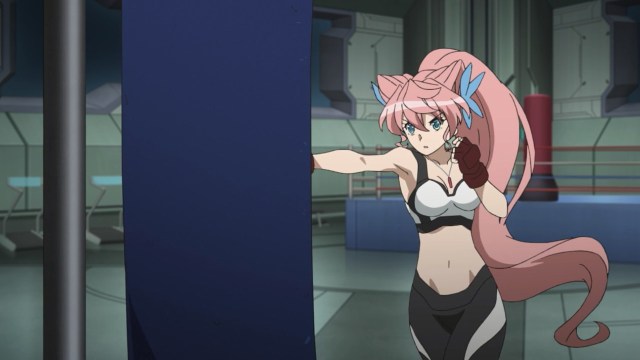 Maria training is one of the best gifts of Season 4/AXZ, hence why we were treated to it again this season.

Maria’s development has to do with her being the oldest member of the team. That and a slight connection to her past. MariTsuba shippers will be blessed with more moments this season. Oh yes.

Our heroines’ other allies had their time to shine as well. Some even grander than others. Let us just say that the traditional fanservice of both the sexy and epic kind throughout the series went up to 11 this time around. Jaw dropping moments galore for longtime viewers who followed the series since 2012.

As for the big bad of the season, while not the best this kind of antagonist has always been more of a puzzle piece for the development of an important character connected to one of the protagonists. While I found some enjoyment from the latest big bad, including the #2 villain, there have been better final bosses in past seasons. This one served its purpose possibly being the ultimate threat because, give this villain credit, the whole Earth was rarely in as much peril as it was this season.

As readers have noticed I repeatedly brought up the past. While it has always been a theme throughout the series seeing our heroines confronting personal demons and threats originating from the past this time it is more important as many events throughout the show’s history culminate this season, not only answering several questions for viewers who paid but also include some game changing reveals. Basically people who did their homework will be rewarded. While there will be some potential holes and confusing reveals I commend the writers for doing the best they could connecting as many dots as they could from so many events throughout the series. I have seen many times how difficult it is to keep events in a long running series consistently sensible without slipping. Not easy at all dear readers.

HibiMiku’s development was huge this season.

And now for the main event…I will save that for the spoiler discussion because I have a lot to say about their development.

Overall Symphogear XV was a fantastic culmination to the series. Symphogear is not only my favorite action anime but one of my all time favorite anime. This season delivered “eleven fold” in my humble opinion. It of course is not without its flaws as others will no doubt point out but to me the good has FAR OUTWEIGHED THE BAD throughout its 7 year run. It has everything I love about anime and then some, like with Mouretsu Pirates. Longtime fans who enjoyed everything up to this point will (most likely) find plenty to love here. As for those who got into the series only recently I THINK you will enjoy this season too.

If this truly is the end of the series remains to be seen but I think a potential movie can be pulled out of the writing desks. Whether we get one or not remains to be seen. Right now I am more than satisfied.