As usual Symphogear left us on quite the cliffhanger in the last episode. How much you wanna bet this episode will do the same? 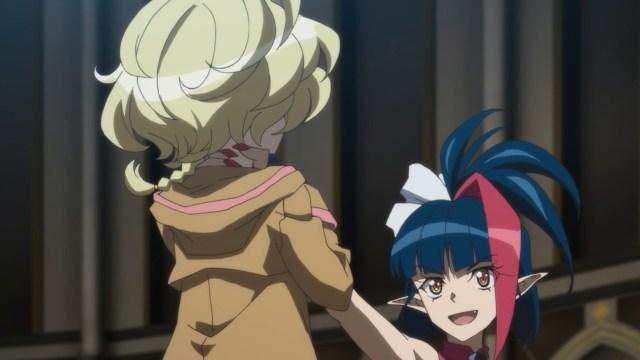 We continued the show back at the ruins of Carol’s Castle where our naughty monster girls, specifically a really naughty vampire, used her curse to force Elfnein to activate the new machine, leading to the awakening of that freaky cocoon. Milaarc was about to look inside Elfnein’s head for more useful info when… 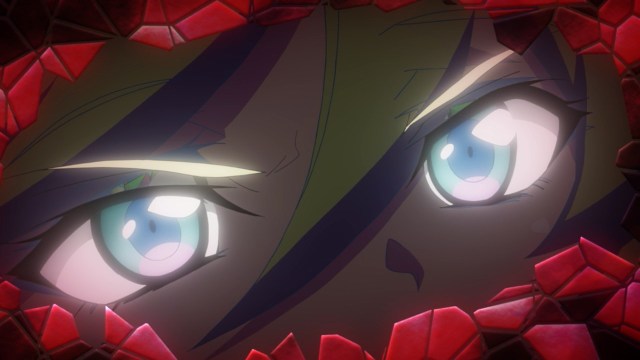 We’ll get back to Elfnein in a bit.

Back outside Vanessa took advantage of her captors distracted by the cocoon with a surprise attack (that surprised even her). Maria and Christopher rushed over to the castle where their teammates engaged the cocoon in battle.

The cocoon had a similar time warp recovery ability like the Uber Alca-Noise from season 4/AXZ. Luckily they had an ace in the hole. Problem was Bikkie may have been a god killer but this divine cocoon had more tentacles than she had arms. She broke free but was heavily damaged. With Bikkie down for the count Tsubasa had the others withdraw, which was a wise choice.

As S.O.N.G. decoded the strange sound emanated from the cocoon (It was the same tune as Maria and Serena’s song) Hibiki had a most interesting dream.

This conversation told me one thing. Maybe Bikkie has subconsciously been aware of Miku’s true feelings, meaning her heart knew but not her brain, hence her obliviousness.

Right. That was Team Symphogear’s scenes. Now it’s time for the main event.

We joined Vanessa returning to Carol’s Castle requesting Milaarc let her finish off Elfnein to test her new hand (destroyed during her escape earlier). Then we got one HECK of a surprise! Before we reveal it let’s skip ahead to Elfnein calling S.O.N.G 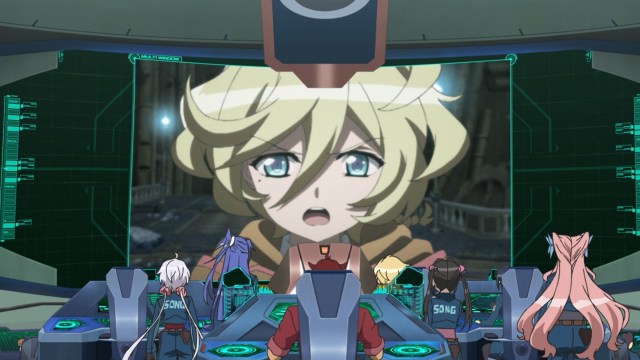 Having temporarily escaped her pursuers Elfnein patched a secret line to S.O.N.G. HQ assuring hers and Miku’s well being. Then she was like “I’m the closest to the machine so I’ll try to save Miku. Crazy, I know but I’m out of options.” Chief Akuma explained that their Captain Marvel was temporarily out of action and wished her the best of luck.

Now let’s talk about the first of two big surprises. 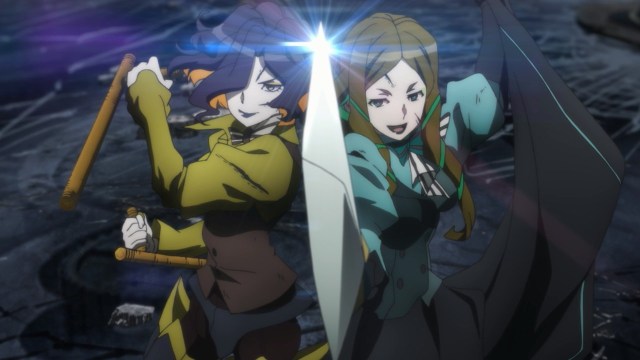 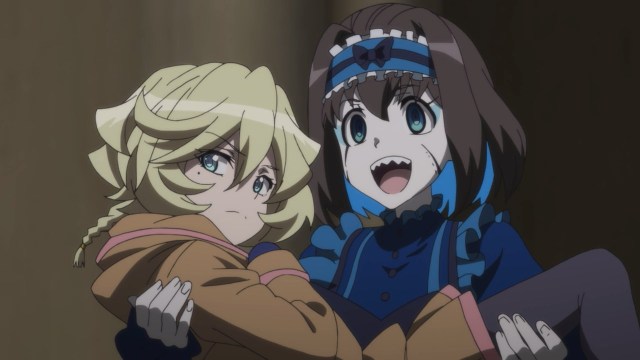 I went crazy when Carol’s Autoscorers made their grand return. Carol protecting Elfnein’s mind from Milaarc and Elfnein willing to defend the body they share reawakened the four. Granted their current bodies weren’t as strong as they were in GX but their love for Carol and Elfnein was much stronger. They did their best but were no match for Noble Red. They were at least able to get Elfnein to her destination.

Now for surprise #2. As soon as I saw Carol’s eyes I hoped deep inside that that meant what I thought it would. Once again cornered by Noble Red Elfnein could take it no more. For her fellow harem girls and her beloved OG she called forth a familiar “doorbell” and…

Carol returns! Here to help her precious backup lover. The split second during the henshin featuring the Autoscorers was an excellent touch.

Considering that despite everything Elfnein still loved Carol it makes sense she didn’t erase her, instead let her sleep…until now of course (That or as Rory theorized, Elfnein had mental conversations with her during her off time). Carol is back to lend her sweetie a hand BABEH!

Ah yes. One more important detail besides Christopher crying tears of joy for Miku and especially Elfnein being safe. Tsubasa’s smile up there, it ain’t natural. It could be because she brought up Kanade (in public this time) again but I suspect there’s another reason.

20 Responses to Symphogear XV Episode 7: Chaos at the Castle Ruins