Quite the cliffhanger last time, as usual for Symphogear. Let’s not waste time and see what happened next.

Hibiki and Tsubasa arrived at the scene of the bloodbath but only found a fresh red pool. Before we get to what actually happened let’s check up on Tsubasa.

Bikkie was of course a nervous wreck but did her best to hold it in. Luckily her teammates helped cheer her up, except one. Like Bikkie the others had a feeling the Alca-Noise attack was a distraction but Tsubasa was like “Oh so it’s my fault Elfnein and Miku were in danger”. Maria was all like “talk to me babe” but Tsubasa was having none of it. She didn’t blame her of course. Tsubasa’s still pretty shaken up after all. Will always be Best Girl to Maria and me.

As Tsubasa was again trying to sort out her struggling Evil Grandpa somehow used Milaarc’s curse to begin his evil scheme of manipulating a heel turn out of the warrior queen. You BASTARD! Oh and we got a traditional Kanade mention. It’s not a complete season of Symphogear without Finé and Kanade cameos.

She and the rest of Team Symphogear were called to the bridge once more. Long explanation short the “inspector”/traitor was indeed the one Milaarc sliced, as many of us suspected. Funny enough as I watched the episode I wondered, “Wait a minute. did she use one of their blood packs to throw our heroines off track?”, but of course the traitor was the one killed because let’s face it, who cares about that Dr Ver wannabe? Personally glad he was a short lived plot device. Good riddance ya jackass.

I didn’t notice last time but Noble Red’s new base was the remains of Carol’s Castle. Basically Evil Grandpa made sure the castle was under the Kazanari jurisdiction, hence why it wasn’t dismantled. At least that’s my best guess. So they needed Elfnein to activate one device in particular, her being the host of Carol’s final body and all. Elfnein was like “But the relics needed to activate the Omega Weapon were destroyed!” and the two baddies were like “Naw. Not that device. THIS ONE!”. It looked like a machine powered by disposed Puppet bodies, or to be freaky, all of Carol’s scrapped bodies. I may be exaggerating but let’s go with that for creep factor. As for Miku, take a wild guess what they needed her for. She even had a spiritual experience.

One of the best parts of the Season 4/AXZ OP.

We joined Maria calming herself by training, thinking of how to help her beloved Best Girl along with that time in S2/G when HibiMiku were blasted by the Holy Ray of Doom, becoming vessels for divine entities (Remember this). She then had a flashback of when Serena and her had arguments. They had a special song. Remembering it gave her an epiphany. We’ll see where that goes another time. 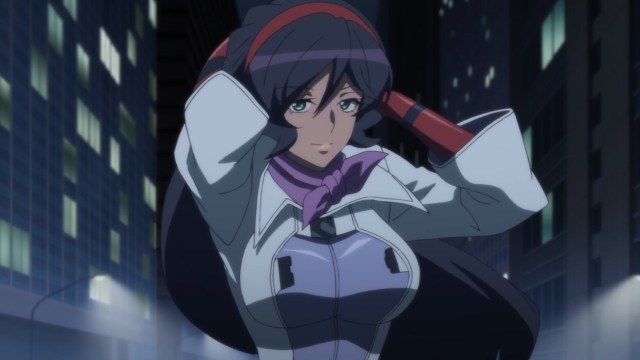 Have I mentioned how much I love Vanessa?

Back to the present S.O.N.G were starting to connect the dots between the Kazanari and Noble Red’s alliance. The enemies detected our heroes obtaining crucial evidence against them so Vanessa set out to throw a party. What followed was a vintage Symphogear chase scene featuring Maria and Christopher vs Vanessa. Awesomeness ensued as always. The duo eventually cornered her but something unexpected, even for her, occurred.

Excellent stuff as always. Like I said on Twitter it feels like every time the writers work on this show they have a blast, hence why it’s one of the all time greatest anime of my generation, yes. Tune in next time to find out what the mystery cocoon thing is. Premature SPOILER: It has something to do with Miku.

14 Responses to Symphogear XV Episode 6: Track Down All Doubts