Well here we are again looking at a show starring a young adult who has strong feelings for an elementary schoolgirl. However, there was something different about this one. Find out what I mean as we take a look at WATATEN!

Note: I will bring up Uzamaid! throughout the review because they share some similarities but are ultimately quite different. 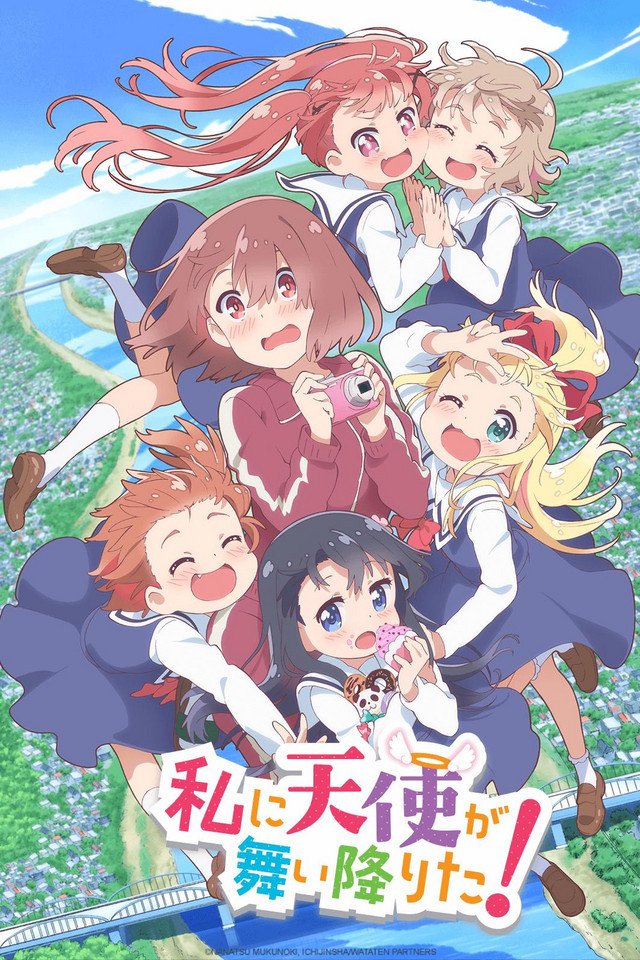 Plot Summary: Miyako Hoshino is a shy college student and otaku. Miyako’s younger sister Hinata, who is a fifth grader, has a classmate and friend named Hana. When they meet, Miyako falls for Hana at first sight.

As mentioned above I would bring up Uzamaid due to it having similarities with Wataten (besides the age-gap stuff).

There may be other similarities I forgot but these are the most prominent. It is also where the similarities because unlike Tsubame who is a gorgeous irresistible force and muscle mistress who openly professes her desire to chow down on cute girls…Miyako is a beautiful introvert who is so afraid of going out into the public (excluding college where she finds ways of minimizing contact with other people) she gets paranoid or even nauseous. That is also most of her character arc where her new little visitors slowly but surely help her leave her comfort zone though it is far from easy. Because of this the drama here lighthearted yet still effective for viewers who can understand Miyako and her fear of the outside world. Other than that she spends her time trying to figure out why it is whenever she sees Hana her heart goes doki doki and she loses control of her senses.

Speaking of Hana let us move on to the big stars of the show, the kids.

Let us go over them from least to most favorite. First up we have Miyako’s love interest Hana. She is the run of the mill skeptic and monotone girl of the group whose primary source of cuteness is her incredible sweet tooth and how devoted she is to getting sweets. So much so she can be easily bribed with them. Worry not though. There are no situations where she is put in danger because of it.

Next is Noa. Her shtick is having great confidence in her cuteness, doing everything she can to make herself as cute as possible, even if at times Miyako and Hana inadvertently tell her she is not the cutest. Fortunately there is one she can always count on to lift her spirits and keep her going. More on that in a bit.

Third is Kanon. She is Koyori’s sidekick though many consider her the brains/more capable of the two. When viewers see the episode focused on them it will be made clear. Essentially Kanon is Koyori’s “Chitose”…without a TOSHINO KYOUKO.

Second is Hinata. The undisputed best kid of the show. Viewers will have their favorites but it cannot be denied that Hinata is the most entertaining. She is a siscon genki who loves her older sister Miyako very much to the point of being clingy and super needy of her. Worry not. Her love is one of admiration and not sexual. She also has great potential of becoming a future pro wrestling Women’s Champion and is generally a super fun girl to be around.

Koyori is a precious angel and it is Kanon’s duty to protect her happiness up till their destined wedding and beyond. Yes, Koyori is Kanon’s “Ayano”…again without a TOSHINO KYOUKO. Koyori’s life goal is to be reliable and dependable in spite of her not really being either. That is where Kanon comes in, to help keep her spirits up when down.

As the angelic face of Koyori’s shows the animation is very colorful with some nice camera work. The season finale especially is praiseworthy for both the animation and the story. The soundtrack is solid with a cute and catchy OP and ED. 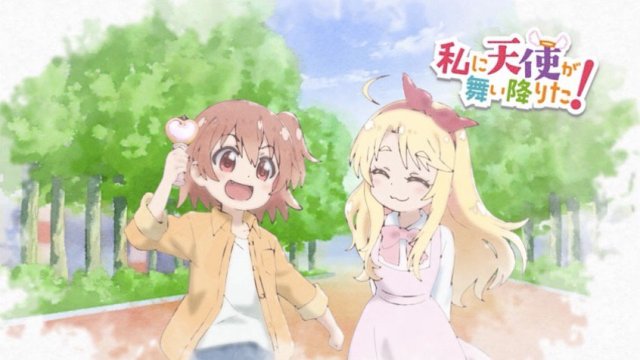 An adorable segment later in the show.

There is plenty of yuri to be found here so enjoy cute girls going on dates and yearning for the affection of other girls.

Overall Wataten can be best described as a more approachable show with a protagonist who happens to have a crush on a pre-adolescent girl. The reason I did not use the lolicon tag is because unlike Tsubame Miyako is far from dangerous and does not go around acting creepy. Yes she does have her creepy moments with Hana but she is not a danger to society considering her fear of it and lack of physical fortitude. Also their interactions are ultimately not that bad. Still prefer Miyako with her “watcher” myself. Other than that this is essentially Ichigo Mashimaro with the yuri cranked up a bit higher, which is a good thing. However, while it is safer to watch than Uzamaid it is still not for everyone. Readers who find age-gap (or to be more specific “Oneloli”) ships/couples uncomfortable are advised to not bother with this one. I can assure the open-minded who survived Uzamaid will have an easier time with this one. Pretty good show surprisingly.

PS: One little nitpick. Not enough screen time for the moms. Gakuen Babysitters did a better job in that regard.

PPS: There is something interesting about the “watcher”. Viewers who saw the show will know what I am referring to. I do not mean her personality or family. Something else.

Yuri and Slice of Life are my anime passion.
View all posts by OG-Man →
This entry was posted in G-Views and tagged age gap, comedy, Wataten, Yuri. Bookmark the permalink.