This is a bonus post discussing the epilogue of Hugtto! PreCure. It of course contains massive spoilers so only read this after finishing the show.

We’ll skip the first half of the finale. Long story short, DEM FEELS! The 2nd half has a time skip to 2030 and if the show was indeed set in 2018, 12 years had passed. Let’s check out what everyone we care about is doing starting with the side-couple. They seem to have become a very famous comedy duo. That’s cool. 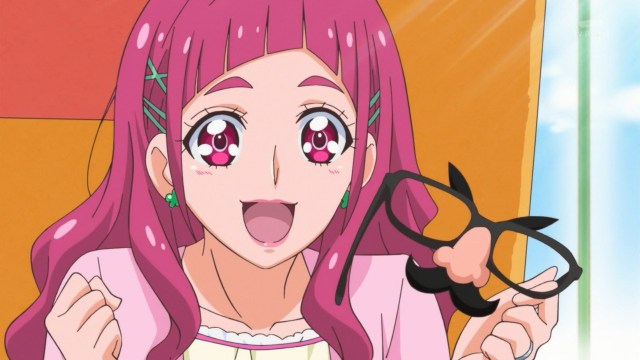 Hana is the president of what became the Dark Corporation in the Bad Future. This is the Good Future. Anyway we’ll get to Hana in a bit.

Saaya became a super sexy doctor just like she promised a certain someone. Speaking of that person…

She kept her promise too.

I wonder if I’m the only one who had dark thoughts in this scene. Let’s see if ofyuriperception will get what I mean.

The rest of the important characters. 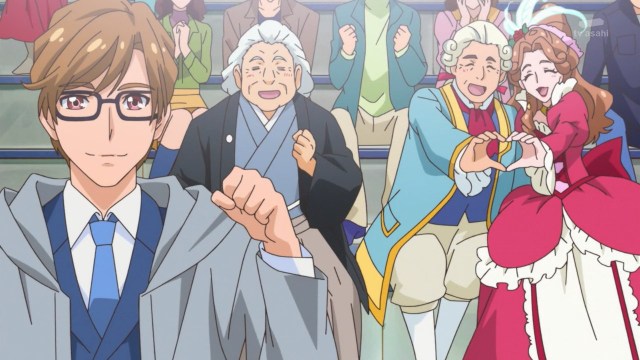 Glad to see Grandpa accepted his grandkids’…preferences. More on that in a bit.

Chairleaders will live on for years to come thanks to Kotori.

I can’t believe they showed the whole thing. It was incredible seeing PreCure do that. I don’t think it’s ever been done in previous seasons.

In case you’re wondering, no. I don’t care who.

Alright. With that out of the way let’s talk about I’m sure all of you are here for. My thoughts on the conclusion we were eagerly anticipating. Here we go… 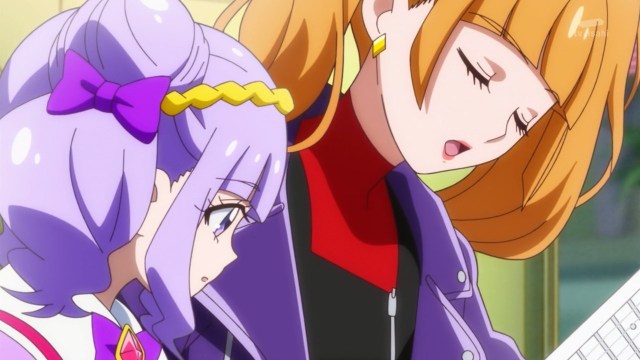 I have no complaints with this outcome.

So we’re going with Dragon Ball Z time travel logic. It all started in episode 47 when Present Traum heard the discussion during the final battle. It changed him. It also altered his plans for Ruru. Instead of an android she is now an artificial human. What this means is the rules of regular human again don’t apply to her. Basically…Emiru waited 12 years for this day, becoming a rock goddess in the process. She can wait a bit longer for…you know. As for how Good Future Pupple and Traum recognized Homare and Emiru respectively? Because the plot said so. Trust me. Not worth wracking your brain trying to figure it out. It’s a kids show. Miracles, good fortune, optimistic messages, etc. It’s too early to hit children with the harsh realities of life. Give them the power to be able to make things better when they grow up. Anyway the reason to start from infancy was most likely because his daughter passed away at the same age and it’s better for Ruru to grow and learn as she evolves. She also has a rock goddess girlfriend to help out with her growth.

Again, totally fine with this conclusion.

PS: If Twilight can get away with imprinting and Citrus being the more known story about Human X Android romance, I don’t see why PreCure can’t get away with a woman falling in love (again) with an artificial loli version of her old girlfriend who will physically evolve in no time at all.

Yuri and Slice of Life are my anime passion.
View all posts by OG-Man →
This entry was posted in Episodic Anime posts and tagged Epilogue, Episode 49, Hugtto! PreCure, Precure, Pretty Cure, Spoilers. Bookmark the permalink.