Hugtto! PreCure Episodes 45+46: The Beginning of the End

We’re almost there doods. The end of Hugtto! PreCure is upon us. Let’s take a look at how the road to the finale kicked off along with a quick summary of the Christmas episode.

Episode 44 ended with a surprise appearance by Santa Claus courtesy of Hugtan (of course). He was in a bit of a pickle due to being unable to deliver the presents to the children of the world. That’s where Dr Traum came in with his awesomely creepy Mecha Reindeer.

Ruru not really in the mood for dada bonding, aka “Father, you are embarrassing”.

While Ruru didn’t look like she wanted to bond with Dada Traum on the outside, part of her did but only showed it when he wasn’t around.

Some characters had touching moments in the episode such as Saaya and her mom and Henri (with his boyfriend) showing everyone he was on the road to recovery. 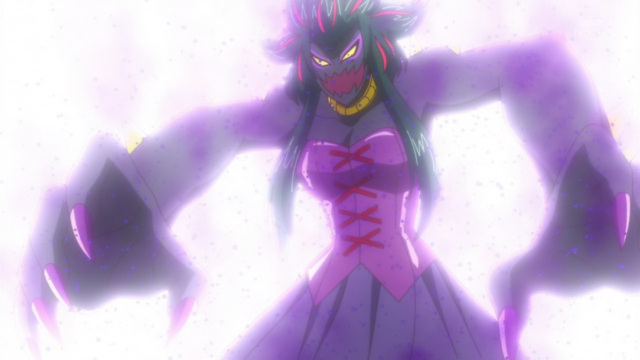 Gelos, growing desperate, opted to beat the Power Rangers herself.

Meanwhile Gelos felt like her time had run out and used one of Traum’s leftover inventions to turn herself into a Wild Oshimaedaa like the other generals before her. The reason she wanted time to stop was because she feared becoming irrelevant once she turned old.

Takumi and Jinjin trying to reason with Gelos.

Takumi and Jinjin were nearby and rushed over to reason with Gelos, assuring her they’d always be with her. Their words were enough to drop her guard and allow the Rangers to free her. The trio were later spotted being chummy and stuff.

Back to our lovable android and her papa. At the Christmas party Ruru and Traum were able to become closer as parent and child with the daughter calling the old man “Father” for the first time. Great stuff. Can’t forget Emiru giving Ruru the extra push.

Now on to the beginning of the end. 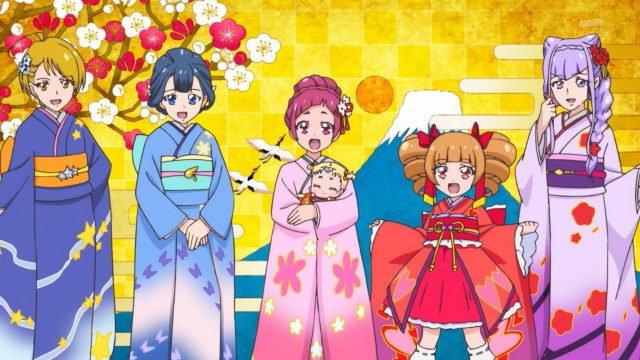 We’ll talk about the first scene of the episode in a bit. Just wanted to share the cuties in their kimonos.

Another very important thing to mention is Ruru blushing. Ruru’s happiness is always important.  So Hana was off to do some errands with Saaya and Homare. Ruru asked to come along but Hana was like “No. You stay. You want to spend more time with your pops.” and Ruru was like “Thank you so much Hana”. So good.

President Kurai trying to turn Hana to the Dark Side.

Now we talk about Hana’s latest encounter with President Kurai. Throughout the show they’ve had this Rey and Kylo Ren thing going on. People who saw both Episodes VII and VIII of Star Wars will get the reference. So Hana almost missed an elevator but the person inside kept the doors open for her. Unfortunately it was President Kurai again.

Hana: “What are you doing here fiend?”

Kurai: “You still see me as the villain? Come now Hana. I am not the one responsible for stopping time in the future. It was man. As technology evolved humanity’s primitive and cruelty unfortunately did not. They are the ones who led the future to ruin. Not me.”

We briefly cut to Ruru and Traum where he answered her question about the president, saying “The Power Rangers stand in his way of achieving happiness like he stands in their way of saving everyone.” He described Kurai as someone who did nothing; he was an observer to be specific.

Hana not giving in to the dark side.

Back to Hana and Kurai.

Kurai: “Now do you understand? Humanity has no future. Join me and together we can ensure no one has to suffer ever again.”

Hana: “NO! I am a Power Ranger. And I’ll protect everyone’s future!”

Hana and friends had a sleepover or slumber party.

Homare and Saaya rushed through the doors to confront Kurai who retreated. Back at the Command Center Hana was a bit shaken from the encounter but assured everyone she’d kick butt because she had them all there to help. After a relaxing sleepover/slumber party the Rangers had a rude awakening… 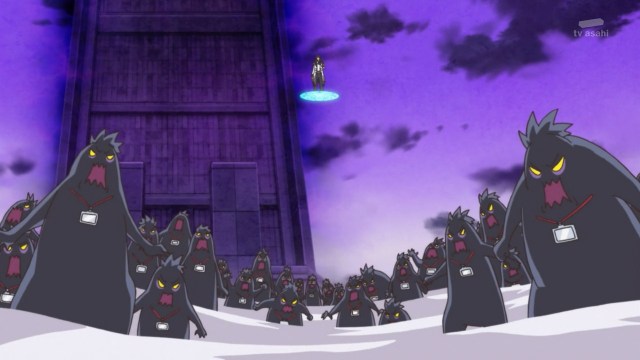 The Dark Corporation’s main building warped from the future as Kurai led an all-out attack to freeze time in the past. Of course our heroines weren’t going to stand idly and let him succeed.

The Rangers fought the Oshimaedaa army while Kurai went on a speech about it being a futile battle due to humanity’s negativity providing more dark energy despite the Power Rangers of the future coming to their aid. The reason being them becoming too reliant on their saviors slowly being corrupted by sin. Thus his plan to freeze time and end all suffering. 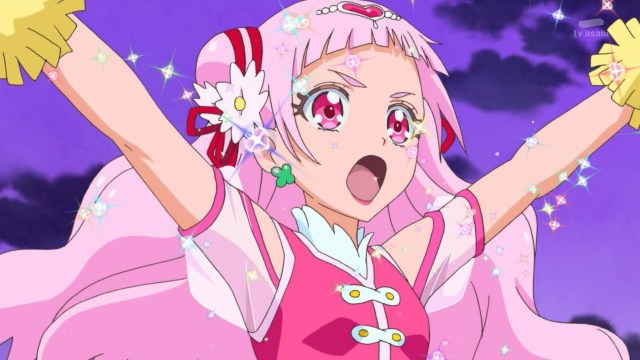 Cure Yell countered with there always being light energy to combat the darkness. Everyone deserved to enjoy their lives. The Mirai Pad responded to Yell’s courage and the Rangers used their Ultra Team Finisher to purify the Oshimaedaa army. Kurai then revealed his trump card.

Reminds me of Xehanort’s Heartless’ Guardian if it were the size of of a kaiju.

Kurai’s Heartless captured hugtan and Cure Yell couldn’t get to her in time. If things weren’t bad enough the Misguided Hamsters appeared to block the Rangers’ path.

Oh yes. In several instances a woman who looked suspiciously like an older Hana appeared in Kurai’s flashbacks or whenever he saw her. Whether this is Hana from the future or someone else remains to be seen. That explains why a certain someone I know had sleepless nights over the possibility of Hana having hooked up with Kurai in the future. I hope he had sleeping pills nearby after this episode.

Now we wait and see how cool of a final battle it’ll be. Most seasons of PreCure are between 48 and 50 episodes so I’m sure it’ll be a 2-part fight, first against the hamsters and finally Kurai and his Heartless.

Yuri and Slice of Life are my anime passion.
View all posts by OG-Man →
This entry was posted in Episodic Anime posts and tagged Episode 45, Episode 46, Hugtto! PreCure, Precure, Pretty Cure. Bookmark the permalink.

11 Responses to Hugtto! PreCure Episodes 45+46: The Beginning of the End