The following Western series I am about to review is the third entry in what I personally dubbed the “Power Sword Revival/Reboot Trinity”. This refers to three revivals/reboots of 80’s and 90’s cartoons about heroes who transformed into great warriors by using a magic sword. The first was He Man 2002. The second was Thundercats 2011 (Thundercats Roar is Teen Titans Go 3 so it does not count). Both good shows that got canned due to lack of merchandise sales, Thundercats suffering the most because of it. Most cartoons at the end of the day are toy commercials after all. Then came the revival of the third Power Sword show which we will be taking a look at today. This is season one of She-Ra and the Princesses of Power, aka She-Ra 2018. 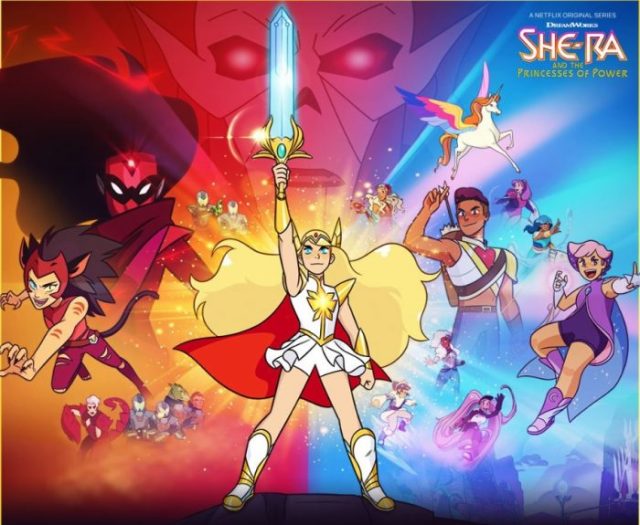 Plot Summary: She-Ra and the Princesses of Power is the story of an orphaned princess named Adora, who leaves behind her former life in the evil Horde when she discovers a magic sword that transforms her into legendary warrior princess She-Ra. Along the way, she finds a new family in the Rebellion as she unites a group of magical princesses in the ultimate fight against evil. She-Ra Season 1 can be best described as an enjoyable start to something potentially greater. Basically a fun origin story. We have a cool lead in Adora being found and raised by baddies (unbeknownst to her), she eventually finds out her old crew were the heels and her new crew the babyfaces all along and from there it is off to the races. The show is about Adora learning life is not all about “saving lives by destroying everything” but rather “protecting the weak and working together with friends and allies”. The latter is not so simple as not only does Adora go through a journey that features some elements popularized by Star Wars (These tropes existed long before SW after all) but she must also learn to overcome personal struggles like understanding what it  truly means to be She-Ra and realizing who exactly is weak or strong.

Let me simplify what I said above by using DokiDoki! PreCure as an example. The popular belief about DDP is that Mana is a Mary Sue and can save the world all by herself without her fellow Cures (Something I disagree with but there is little I can do about it). She-Ra is the opposite. While Adora transforms into a roughly “8 foot tall” Amazonian hottie (Thank you for giving her 25 inch pythons and mighty calves) she is still a newcomer and does not instantly become a “problem solver”. That is where her new friends and allies come in to lend a helping hand.

Bow and Glimmer join our heroine at the end of the first arc to form the Best Friends Squad. Bow being the chipper optimist (Smarter and more observant than most genki characters) and Glimmer the tsundere. The trio meet up with other potential allies. Whether they all join or not the viewer has to see for themselves. Do not fully trust the intro is what I am saying.

Another reason I brought up DDP earlier is because She-Ra 2018 reminded me of watching a season of Pretty Cure to an extent.

She-Ra and her potential allies.

Next let us briefly go over the so-called “elephant in the room” (heavy quotation marks): The new character designs. Put simply most of the cast were turned to teenagers of varying shapes, sized and ethnicities compared to its 80’s counterpart. And the issue with this is…”Muh childhood”. That is the best critics who judged the show based on designs or “de-aging”. Umm…believe it or not none of the princesses, Bow or Seahawk were older than 25 despite their 80’s cartoon hunk/babe appearances in the original either. Point being I had zero issue with the redesigns when they were first revealed and have no issue with them after the season finale. Favorite side-princess is the ” Mermista followed by Entrapta. Moving on to the animation quality. While I did say the show is colorful, the motion itself is solid. When it comes to Western cartoons I am not the best judge of what makes a show look good. Having grown up watching 90’s Cartoon Network and Nickelodeon originals I can only summarize my opinions of the animation in She-Ra as solid. After all, when the modern day Cartoon Network hits are shows like Adventure Time and OK-KO I cannot say much else. The characters move fine though sometimes I notice some lagging. The soundtrack does its job. Not noteworthy but solid…again, like a season of Pretty Cure. I will say this version of Etheria (Kingdoms, locale lore, traditions, culture, etc) is pretty cool.

Speaking of modern Cartoon Network shows the comedy in this one, which there is a lot of, reminded me of the humor in shows like Steven Universe, OK-KO and even Disney’s Star and the Forces of Evil. What I mean is it felt grounded. Thankfully it is not like Adventure Time with its heavy emphasis on “hip with the kids” slang and mumbo jumbo jargon. It was chill, well done and timed.

She-Ra and Catra, aka CatrAdora.

Lastly we have what all readers came here for, to get my thoughts on Adora X Catra and the other pair. First up is CatrAdora. I have mentioned on a few occasions that I am not a fan of “Foe-Yay” ships. These refer to shipping rivals obsessed with beating each other. Some examples include Naruto X Sasuke, Goku X Vegeta or Sonic X Shadow (Yes. Really). Adora X Catra is one of the few times I am all on board with it. The show planted the seeds of the two potentially being more than “best friends torn apart by war”. Some episodes gave the Nation a lot to believe in. Now it is up to the writers on whether they will go through with it or not. Time will tell. As for the other pair. They pop up here and there but are not formally introduced till near the end of the season. They reminded me of a certain duo in Deadpool 2. I really like the two and hope they get much more screen time next season.

Overall She-Ra and the Princesses of Power (Season 1) was fun and shows this revival has the potential to be a great series. The cast on both sides are fun, the character arcs were familiar but nice with some of them heartwarming. The presentation is solid with its cool and diverse redesigns. The yuri potential is there with a hopeful main pairing and a wonderful side-couple who hopefully get much more to do next time. I have full confidence that a second season is coming and eagerly anticipate it.

PS: I did not talk about the references to the original because I did not grow up watching it. I did recognize the plushie though. Kinda glad he was a plushie though I would not have minded were he similar to Snarf from Thundercats 2011.

PPS: Not one of my best reviews but I tried.

Yuri and Slice of Life are my anime passion.
View all posts by OG-Man →
This entry was posted in G-Views and tagged action, adventure, fantasy, sci-fi, science fiction, Season 1, She-Ra 2018, She-Ra and the Princesses of Power. Bookmark the permalink.