Here is a fighting game I had been eagerly anticipating and the main reason I chose to review fighters on the blog. Question now is whether this surprise sequel to an old Neo-Geo Pocket Color title was worth bringing back to the modern age. Let us find out as we take a look at SNK Heroines Tag Team Frenzy.

G-Rating: Okay (Depends on whether the player goes online or has friends to play with locally.)

Plot Summary: A group of female fighters from across the SNK universe (and some DLC Guest Characters) are transported to a mysterious castle and forced to face each other in sexy gladiatorial combat while wearing fetish outfits. All part of some nefarious scheme by a naughty mastermind. 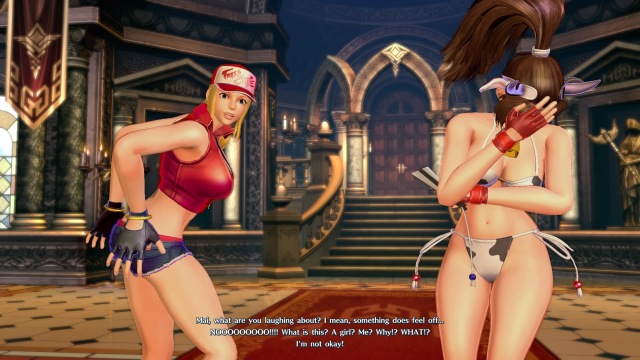 Yes. One of the playable characters is a female Terry Bogard. SNK’s Hulk Hogan turned into a beautiful woman.

As mentioned above SNK Heroines Tag Team Frenzy is a sequel to the 2000 Neo-Geo Pocket Color game SNK Gals’ Fighters but instead of it being one on one it is a two on two tag team fighters.

Let us first go over the content and presentation. The content is the standard modern fighting game romp with Story, Versus, Training, Tutorial, Survival and Online modes. The Story is a seven match Arcade style ladder with the chosen team facing other teams while going through amusing cut scenes of the player’s team or the naughty mastermind, culminating in a final battle against said mastermind. While I am keeping the mastermind’s identity a secret readers who have played King of Fighters XIV will recognize this person right away. The other modes mentioned are self-explanatory. There is a neat feature where players can take control of one character per match. What I mean is that Story and Survival can be played with two players (one player controlling each girl) and Versus and Online can be played with up to four players in teams of two. Battles take place in different parts of the mastermind’s castle and like Story Mode there are seven stages to fight in.

Print Ad featuring the base roster.

The base roster consists of fourteen ladies, twelve of which are returning veterans and newcomers from KOF XIV whereas the two legitimate newcomers are Shermie (Returning from KOF 97) and the aforementioned “Fatal Cutie” Terry Bogard. Yes, I do think Fatal Cutie Terry is better than Gals’ Fighters’ Miss X. Also as previously mentioned there are DLC characters on the way such as Thief Arthur. There are things to unlock in the game such as artwork, songs, costumes and voice sets. Each can be unlocked by playing Story Mode with a specific team (Congratulations artwork) or with the in-game currency.

Now on to the presentation. It uses what I would call the “Version 2” character models included in post-release patch from KOF XIV. The models here do look a bit better than the aforementioned game, meaning “Version 2.5”. The ladies all look great physically while the facials are fine. They still look nice. The aforementioned castle floor stages all look good as well as there are things happening in the different chambers besides the two combatants and their partners cheering them on or throwing items. The soundtrack is decent but nothing to write home about. The remixed character theme songs are okay.

Next up is the gameplay. As mentioned the game is a two on two tag team fighter. There are two main types of tag team fighters out there: “One fall” (KO one character to win) and “Elimination” (KO all team members to win). SNK Heroines is a “One fall” tag team fighter.  However, unlike most other fighting games where the goal is to beat up the opponent till their health drops to zero, here it is to weaken them to the point that fighters can unleash one of their Super Moves to finish them off. It is similar in that regard to Playstation All-Stars Battle Royale. though like said game do not expect to constantly pull off Super Specials up the wazoo. Another important bit of information about the game is its simplified combat mechanics. While a game like Koihime Enbu RyoRaiRai touted on how simple it was to pick up and play (and to a degree it is) SNK Heroines is even simpler. We are talking Super Smash Bros-esque games simple. What I mean is there is a dedicated button for every command: Light Attack, Heavy Attack, Throw, Block etc. This makes it very user friendly while at the same time requires skill to play competitively though I do not expect to see this title in any big fighting game tournament venues like EVO anytime soon despite there being the option of turning off items. 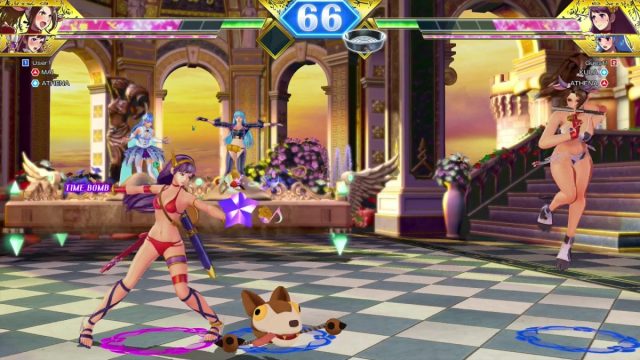 Speaking of items let us briefly talk about them. Items are acquired via successful combos or hitting the yellow diamond like items that appear. The acquired items range from offensive (bombs and pots), support (healing and EX power up) and traps (poison bomb, time bomb). So yes, even more Smash Bros/PS All-Stars-esque. As previously mentioned items can be turned off in the Options menu.

Lastly let us go over the Customize menu. Here is where players can deck their favorite ladies in their available costumes with a bunch of accessories from wings, ears, decorations, police car lights etc. Should players prefer having the ladies wear their default gear from KOF XIV those are also available for purchase with the in-game currency. Accessories from other characters can also be used. For example, Kula can wear Love Heart’s cowgirl mustache accessory if the player so wishes.

Sadly no yuri content to be found here though there is a victory quote where Zarina compliments Mian’s pretty face due to her fighting masked in KOF XIV but that is nothing worth shipping.

Overall SNK Heroines Tag Team Climax is a fun fighter whose mileage depends on how many people there are to play it. It is similar to Koihime Enbu RyoRaiRai where the single player content is lacking but it is still enjoyable in small bursts. The concept is good but more characters and modes would have helped boost its appeal. The difference between Koihime Enbu RRR and SNK Heroines is that Koihime has a solid asking price whereas SNK Heroines’ content (Even with more characters coming) is lacking for an initial $50 price tag. Good game but not enough content to warrant its initial asking price.

The game is available at retail and digital stores or at your regional NIS store.