A Kiss for the Petals: Maidens of Michael Now Available on GOG.com

I haven’t brought up the “Steam Visual Novel Purge/Ban” that has been plaguing the site since Mid-2018 because there wasn’t much I could add that other sites have done in great detail. Most can agree the purge/ban hit VNs and KNs hard but one game was hit the hardest of all. What I believe was the catalyst of the purge before the poison began to spread, A Kiss for the Petals: Maidens of Michael. Without going into great detail the game was pulled from Steam. Other titles were threatened on getting pulled down during the start of the purge but there was enough outcry to stop Steam. However, MoM was the only title that has yet to be welcomed back and considering the current situation over there it most likely won’t be. 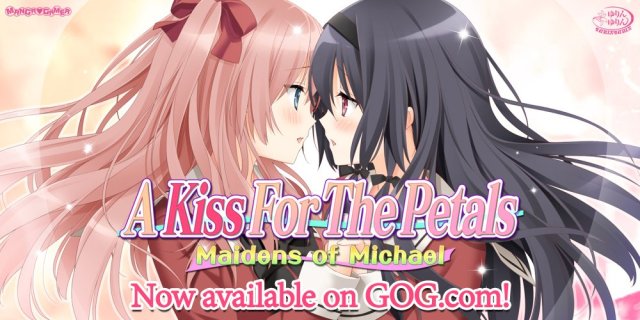 Fortunately one other major PC game selling site opened its doors and invited the All-Star Petals game to be sold there. Yes. Mangagamer announced that Maidens of Michael is now available for purchase at GOG.com! Get the game HERE with a first week discount.

Check out my review of Maidens of Michael HERE.

The game is also available for purchase at Mangagamer’s store HERE. (NSFW Warning)

Yuri and Slice of Life are my anime passion.
View all posts by OG-Man →
This entry was posted in Yuri news/topics and tagged A Kiss for the Petals, GOG, Good Old Games, Maidens of Michael, Mangagamer, sono hanabira, Sono Hanabira ni Kichizuke wo. Bookmark the permalink.

2 Responses to A Kiss for the Petals: Maidens of Michael Now Available on GOG.com